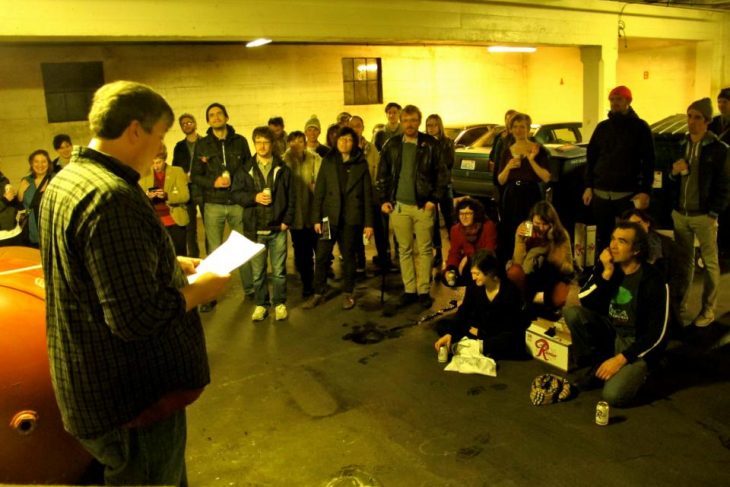 The catchphrase for this year’s resurrection of Seattle’s Fringe Festival was “close-to-the-skin,” but after a nearly ten-year hiatus, the festival got so close it went under. Having 20 shows spread like a theatrical treasure hunt across a one-block radius on Capitol Hill was as addictive as sampling new flavors of gelato. While five productions may seem like a paltry fringe binge, think of it as an appetizer for next year. From polished solo shows to messy experimental pleasures, this year’s Fringe purred, sang, prayed and chopped its way beneath Seattle’s skin.

Theater Simple flushed out the story behind the species-crossed lovers of Edward Leary’s nonsense poem “The Owl and the Pussycat.” The cast was unrelentingly cute and clever in their exploration and expansion of Leary’s original text, beginning with a Shakespearean parallel where fowl Montagues take on furry Capulets (“I bite my cloven hoof at thee”) and eventually ending up on a tropical island of love complete with a wedding chapel manned by a showgirl Turkey and pig Elvis. The costumes are wonderfully anthropomorphic—from Turkey’s glitzy red scarf of a wattle to Owl’s aviator helmet to Pig’s full pink body suit and sequined cape.

The Theater Simple world is an engaging one where battles are fought in rounds of rock-paper-scissors, audiences aid in the production of thunderstorms and wedding vows are crowd sourced Mad-lib style. The experience was colorful and rich; as transformative in a black box theater as one imagines it would be at a local park or in an elementary school library.

Irrational Robot Bureau’s Android Arias was set in a trippy dive bar with electric-colored drinks, a karaoke caller with the voice of Siri, scenes from black and white surrealist films silently projected on a screen, and repetitive electronic beats provided by the masked DJ Irrythmia. The partial improvisation and spontaneity of the performers did well to capture a sense of anticipation and uncertainty as one by one they stepped up to the mic and their characters emerged like neon signs flickering to life.

Unfortunately, the show felt like watching the antics of drunk strangers given free reign with a microphone—occasionally endearing, funny at times, but overall tedious. The characters, who remained mostly disconnected throughout the show, were at their most engaging and animated as they made their final exit, laughing and chattering as they stumbled together towards the bar door.

In Chop, Dallas-based solo performer Brad McEntire revealed the beauty behind a visceral topic: an isolated man among a community of amputation fetishists. McEntire’s staging was simple and evocative—the show began and ended in a dream sequence in which he used a flashlight to illuminate only his face, his head floating high in the air as if severed.

McEntire set an easy tone of confident self-deprecation, weaving his personal history with the Greek myth of the Minotaur and traditional circus sideshows to slice at themes of unnaturalness, anonymity, adventure and trust. It is a unique premise that lead to the conclusion that sometimes chopping off pieces of ourselves is the only way we become whole.

Sauer Bauer Production’s irreverent Christian pop musical The Horrible Lamb had the power to move audiences in ways Joel Osteen only dreamed. Lamb told the story of Lyle, a young slacker who attempts to steal the spotlight of childhood acquaintance-turned Christian superstar Hal O’Luyah, who is essentially the Derek Zoolander of the Evangelical pop scene.

Everything about this show was outrageous, from the costumes (which included not one but two mullet wigs and lots of leopard print) to the song lyrics (“Heaven is in my mouth when I read the bible”) to the background projections showing wolverines, photo-shopped images of the Pope and illustrating “Christian food” with the logo for Chick-fil-A. The show was not so much a parody of religious fervor as entitlement, bureaucratic corruption and the popular modern desire to be “beloved by teens worldwide.”

There was a post-apocalyptic flavor to Ear to the Ground’s School of Fish—a series of vignettes that came together to tell a larger story of modern rootlessness, abandoned idealism, consumerism and the many reasons “this generation wants a reset button.” The scenes were powerful in their simplicity but not overly symbolic. In one vignette the performers lined the stage like disaster victims, passed out mismatched mugs and tin camping cups, drank the contents and slowly handed them back. In another the performers filed through the audience singing the English folk song ‘Hey Ho Nobody Home” in a round as haunting as it was soothing. It was a healing balm, an incantation, a reset button.

Many scenes conjured the vulnerable and unified aftermath felt in the wake of national tragedies like 9/11 and Hurricane Katrina—the moments of disaster that break through our fast-paced and disparate lives forcing people to breathe together in a sacred togetherness.

Press shot from The Horrible Lamb