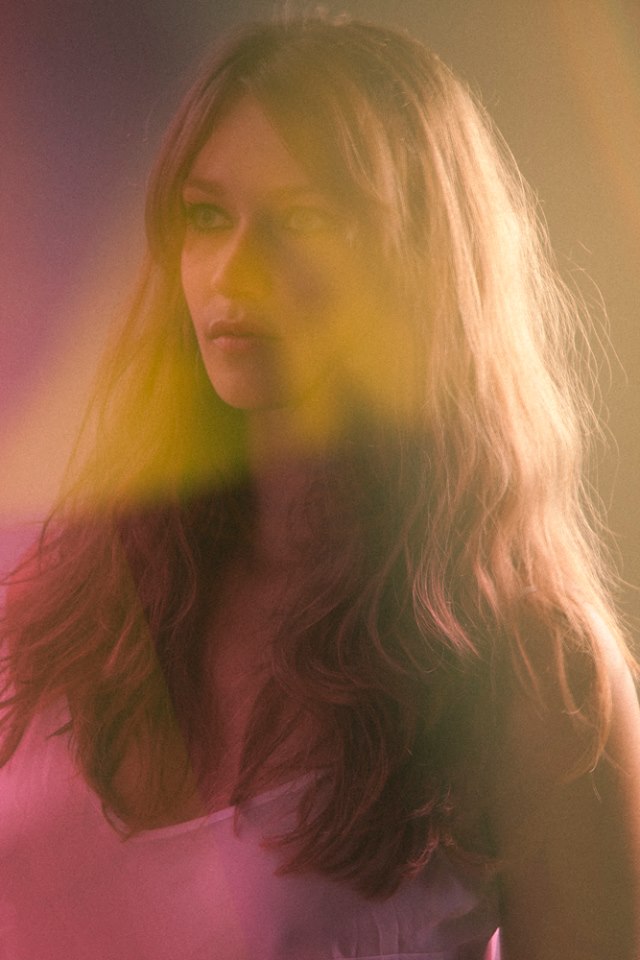 The last time Whitney Lyman performed at Barboza, the half-empty audience was freezing its collective ass off, fighting blasts from the industrial fans that the venue people were determined to keep on high. The irony was thick as Lyman belted out the song “Firebreather” as everyone stood shivering in their mid-July clothes. But Lyman’s dreamy folk-pop charmed the audience into docility, swaddled by her enchanting voice and creative vision.

Lyman writes music like a surrealist paints, layering the bizarre and the divine into one mind-expanding canvas. Drawing on an array of influences from Brandi to Queen, her stuff is the musical equivalent of a melting Dali clock. Her song “Laser Beam” blends the clear, precise vocals of ‘90s pop with intricate string parts and a floating triplet feel that lands surprisingly in fast duple, as she sings, “Crazy in love, like an ally-oop!” Lyman went to music school and knows how to flout the rules.

Lyman lives a life in motion. Among her close-knit Mormon family, she says she’s the black sheep. Most of her family still lives within a few blocks of each other in Pocotello, Idaho. It was unheard of for her to move miles away. But seven years ago, she felt a pull to Seattle and to Cornish College of the Arts, where she studied composition. As it turns out, she isn’t the first Lyman to write and record her own music.

In the 1970s, when Lyman’s mom was about 13, she and her family wrote and recorded an album as the Parish Sisters and that’s the first music Lyman remembers listening to. They sang covers of Simon and Garfunkel’s “Feeling Groovy” and “What the World Needs Now” by Burt Bacharach that Lyman thought were originals.

At six years old, Lyman wrote her first song, inspired by the death of her brother’s pet gecko. “The hook was ‘Sometimes it’s so hard to say goodbye,’” she says laughing. “I still remember it.”

Whitney’s parents divorced when she was young, so she spent a lot of time in the car making the four-hour drive between her dad’s house in Boise and her mom’s in Pocotello. The car, subsequently, was the birthplace of her post-gecko work, where she made up songs and sang to herself during the drive.

Lyman’s dad exposed her to Queen, Journey and other bands she bands she describes as “dad rock,” infusing her songwriting with arena-rock grandeur and an awareness of orchestration. Around the same time, Lyman’s mom let her order CDs by Britney Spears, N’SYNC, Brandi, Mariah Carey and other ‘90s pop artists from a mail-in catalogue.

“I’d listen to that music all the time and sing along—I learned exactly how they did their inflections, singing along with Justin Timberlake and Mariah Carey, and realized I could do it just like they did it,” Lyman says. Later, she discovered Swedish producer Max Martin, then in his mid-30s and the visionary behind much of the glossy pop of the late ‘90s and early ‘00s.  “I realized that almost all of the music I was influenced by during that era was written by him. It’s fascinating that it was one person—of course it was the singers and their vocal abilities too, but [his] songwriting influences my songwriting.”

Her first band in Seattle, an Afro-pop quartet called Pollens, came straight out of Cornish in 2010 and made a deep impression on the local scene until they disbanded in 2014. She currently performs with and arranges for the Seattle Rock Orchestra and is about to release her second single with electro-hip-hop crew Theoretics and new singles with electronic producers Zoolab and Manatee Commune.

Beyond all that, Lyman’s second solo record looms on her horizon and the aforementioned “Firebreather” is its second single. The song is a ball of forward-moving fire, a fluid composition with countless moving parts. Its urgent lyrics incorporate her fascination with the Chinese zodiac—her sign in the Dragon—and the music is laced with Asian-inspired pentatonic guitar riffs, erhu-like violin. The song is about overcoming obstacles to achieve your destiny. In order to become the dragon, you have to defeat the dragon.

“I want to be different, but also better,” Lyman says. “Mostly, I want to be better than I’ve ever been before.”

Whitney Lyman celebrates the premiere of “Firebreather” with a performance at the Triple Door on Tuesday, Nov. 10.