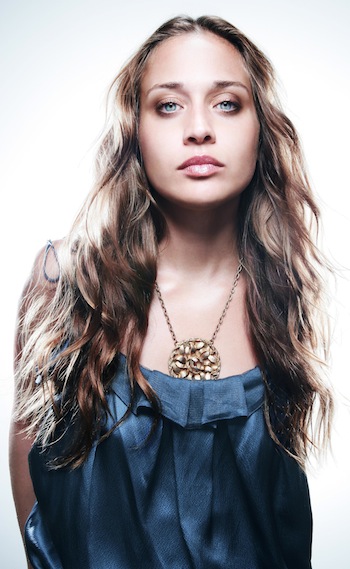 It’s been nearly seven years since Fiona Apple had an album to tour behind, and even without the personal and creative evolution articulated throughout New York Magazine’s revealing recent portrait, it’s evident she’s a very different woman than the one who famously disavowed the industry early on in her career.

Gliding stridently on stage at the Paramount in a bright rose tank top and white column skirt, the 35-year old vocalist cut a slight, but striking figure, waving appreciatively towards an exuberant audience who sprung instantly to their feet and stayed that way for the majority of her 90-minute set. Briskly breaking into “Fast As You Can” (from 1999’s The Pawn…), Apple set her own bar high, elevating the song’s more tempered moments with naked howls and pounding out the song’s closing bars on her piano while guitarist Blake Mills wound his way down its dramatic coda.

Moving through a well-balanced set that leaned primarily on tracks from new release The Idler Wheel… and The Pawn…, Apple vacillated naturally between theatrical showmanship and unnerving introspection, the latter of which was clearly not a posture, but her most present, self-aware state. While singing about neon zebras shaking off their stripes, she shook violently herself, and moved instinctively towards the floor in front of drummer Amy Wood during a percussive breakdown. Apple wasn’t hiding or cowering—she was comfortably inhabiting the emotional and sonic structure of her own compositions.

As enchanting as Apple’s eerie, organic grace was, the irritating obtrusiveness of the audience threatened to overshadow the evening’s more stirring moments. The taut drama generated by pregnant pauses built into “Not About Love” was nearly nullified by disrespectful “We love you Fiona!” outbursts (a difficult sentiment to reconcile with the gate-crashing consequences of the behavior). This appears to be a curse of arresting vocalists playing large houses in our city (Neko Case’s audiences being serial offenders). Also disappointing were the number of people blatantly ignoring her requests for an absence of flash photography, with more than a few dashing down the center aisle, camera and phones aloft. We need either more vigilant security or universal lessons in manners, stat.

That said, Apple was ultimately in charge, delivering the most powerful moment of the evening with a harrowing rendition of “Every Single Night,” the first single from The Idler…. Passionately spitting forth the lyrics, “The rib is the shell and the heart is the yolk/And I just made a meal for us both to choke on,” she was startling, lucid and undeniably fearless.

She conjured a beautiful benediction by refusing to play the faux-ovation game, blithely telling the audience “Pretend I left, you clapped, and now here I am again!” before launching into a lovely cover of Conway Twitty’s “It’s Only Make Believe,” a final note that was both cheekily self-depreciating and refreshingly self-possessed.