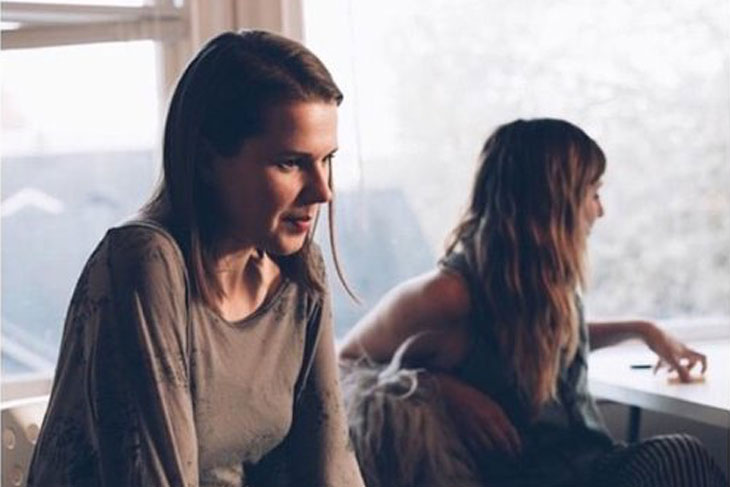 “Ah, the wonders of the internet,” says Rafael Soldi. “Whether it’s Skype or Google Hangouts, it turns out to be pretty difficult to make a four-way group video chat work.” For the past six months, Soldi and fellow artist-curators Jon Feinstein, Serrah Russell and Sierra Stinson have been programming a new arts space in Seattle long-distance, with Soldi, Feinstein and Russell in Seattle and Stinson in New York.

Today they’re in the same room again, in a sliver of vacant storefront space on Capitol Hill that will become the interdisciplinary art space Found. Sandwiched between a swanky restaurant and a tattoo shop on 12th Avenue, the narrow 150-square-foot space feels almost homey, with a Persian rug spread across the hardwood floor. Only the fresh drywall, creating more wall space for art, hints at its future use. Found will open in April with a show by LA- and Seattle-based sculptor Lauren Fejarang and Seattle-based choreographer/performer Imana Gunawan.

Found is a space to discover underrepresented artists, the curators say. A place where multimedia artists can meet performance artists; where Seattle artists can find work from people living in New York, Chicago, London or Berlin, and vice versa.

This interconnectedness from city to city ties Found and its founders together. Soldi, originally from Peru, met Feinstein in New York about a decade ago. Both photographers have created boundary-crossing curatorial projects before: Soldi’s Strange Fire Collective is a semi-local curatorial group and online art platform that centers the work of women, people of color, and queer and trans artists. Feinstein’s Humble Arts Foundation connects lesser-known photographers with blue-chip names through exhibitions, books and other programming.

Soldi and Feinstein found their way to Seattle independently, where their paths crossed with Russell and Stinson. “You could make an infographic of how we’ve met,” Feinstein jokes. “Or of the artists that we’ve introduced each other to,” adds Russell.

They hope to do the same thing with Found. “We want to create a connection between the Seattle and (inter-)national art communities,” says Stinson, who moved to New York from Seattle last summer but is still “pretty bicoastal.”

Stinson’s move to New York meant a temporary break for Vignettes, the longstanding series of one-night-only, influential art shows she curated and hosted in her Capitol Hill apartment. But beneath the surface, she and Russell, who cofounded the online gallery Violet Strays and joined Vignettes in 2015, were plotting Vignettes’ second act(s): a project with local publisher Gramma (a citywide project with an exhibition in the former Western Bridge space in May) and a space for their next curatorial venture.

They found the space almost by luck. Mutual friends told them that local architecture firm Hybrid, which has hosted art exhibitions during Capitol Hill’s Art Walk, had its eyes on a space below their offices. “It was a trash room,” says Hybrid’s Matt Fujimoto, looking at the clean, white room now free from debris. “We thought, why don’t we show art here?” But Hybrid didn’t have the capacity to fill it with art every month, nor handle the day-to-day PR and management —which is where Stinson, Feinstein, Russell and Soldi came in.

Found is in many ways a hybrid space. Not quite a commercial gallery, although everything will be for sale, it’s also a space for artist talks and performances and a storefront where works are visible through the windows. Although Found is a Vignettes endeavor, Hybrid will host a couple of the monthly exhibitions each year.

“It’s a malleable space,” says Soldi. One that reflects the neighborhood’s long-term and day-to-day mutations and different audiences. “Found is about finding space, a home in an increasingly difficult landscape.”

This article has been updated to reflect a delay in the opening of the space.