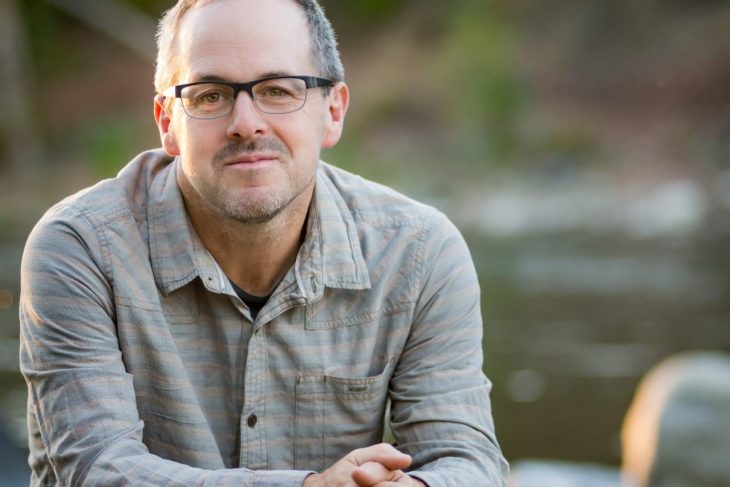 In January, I woke before dawn to drive from Spokane to Connell, Wash. Dense fog darkened the morning and iced the interstate in treacherous patches; ahead, I could see will-o-wisp lights in the mist: A semi-truck had skidded and flipped in the ditch; state trooper sirens flashed on the shoulder; red and white flares burnt on the black top. I slowed and drove by the wreck—the trailer intact, the cargo seemed safe, but the cab was smashed, and the driver probably had been injured. I sped back up. I was due at the prison to talk about poetry by 9 a.m.

Driving home from Seattle a few winters ago, late in the evening, I marveled at the night skiing on the Snoqualmie Pass. The mountains bejeweled with strings of lights.

Curlew, Wash. (can you find it on a map?): I asked 7th graders to share some favorite words—words upon which they loved to chew, syllables as snacks, sound clusters of sorts. They shouted out “phantasmagorical,” “plethora,” “supercalifraga-delicious” (as thestudent put it)—those polysyllabic gems that kids connect with smarts. “How about some simpler words? Words that pop or fizz when you say them?” “I like ‘spool,’” one girl said. “Pop-tart,” said a boy in a light blue T-shirt, his red hair a tangled muss. “My favorite word is AK-47,” announced another boy, quiet for the entire hour up to that point. “I love how the muzzles flash like firecrackers.” Earlier, I’d talked about similes—how comparisons can make the world vivid. He remembered. His teacher glanced at me—her eyes said, “let it go”—and then she told the class, “It’s almost time for lunch.”

Rosalia, Cusick, Palouse and Twisp. Kennewick, Omak, Ione, Wenatchee, Yakima, Spangle. And Brewster. Nespelem. Seven Bays. Sometimes when we say a word, the sounds bring an image: maybe a green tractor in a newly plowed field, an osprey screaming to protect its nest.

Metaline Falls—I’ll ask again: can you find it quickly on a map?—is in the extreme Northeast corner of our state. 238 people live there; mines for zinc—that crucial ingredient in the spark of aluminum solder—and other minerals are an important part of its economy. Kevin Costner was there in the mid-’90s for the filming of The Postman, a post-apocalyptic film; according to people who lived there at the time, the influx of money was strange—it created a carnival-like economy; an employee of the production company supposedly wrote bloated checks to people whose dogs got run over because of the increase in traffic. Today, rumors suggest the mines will close in a few more years.

In Lyle, a small town of about five hundred, the “Country Café” on the North side of the Columbia Gorge offers a hearty breakfast; 22 photos of young men (and one woman) in military dress decorate the walls. All of them are in active duty or gave their lives in service far, far from home.

In Endicott, there is neither gas pump nor grocery store; the school is small, and shrinking. Most Thursday evenings, there is a potluck at a community church; several dozen people turn out—children bouncing around the tables—maybe for pasta and salad, maybe for an array of soup and store-bought cakes.

Last year, in the Northeast corner of the state, a landslide closed the highway between Metaline Falls and Selkirk High School. The literature teacher had to drive a 30-mile detour to get to school. The time and distance didn’t bother him so much; it was the chance of hitting a deer that made him nervous. They dart at headlights. The lights make them nervous. Flash your high beams from time to time to keep them aware of you. Everyone has some advice.

Chewelah, Odessa, Cathlamet and Forks. Goldendale, Shelton, Ritzville and Concrete. Liberty Lake, Waterville. Twisp. How often do we forget the names of things, of people, of places?

Connell is in a valley between the Tri-Cities and Ritzville. During the day, if you’re not paying attention, zipping past it is easy—unless you need gas, snacks or caffeine. At night, though, the horizon northwest of the town glows incandescent with the lights from Coyote Ridge Corrections Center. Half of the town’s 5,000 citizens live in the prison.

By Vantage in the center of the state: dinosaur bones and a jagged canyon through which the Columbia River pushes (channeled basalt, shifting sand bars, buried villages and towns, and then, finally, concrete dams). Dawn from the east illuminates giants to the west. Windmills spin and spin through fog and snow and shadow. Spindly monsters for jousting. White buildings at which to tilt. Prop blades cutting sky into megawatts.

Westport, Forks, Oysterville and Anacortes. Soap Lake, Odessa, Valley and Palouse. Some place, some word, some light which can be called home.

Tod Marshall served as the Washington State Poet Laureate from 2016–18. The position is sponsored by Arts WA and Humanities Washington.