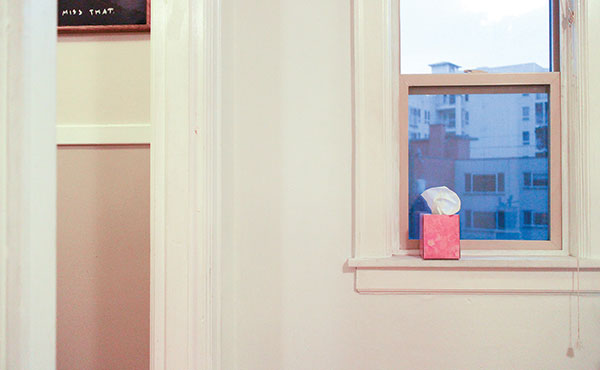 The final show at Vignettes—the apartment gallery nestled in a tiny studio in Capitol Hill’s El Capitan building—is ending where it began, with a show by Graham Downing. The very first Vignettes exhibit in December 2010 was also Downing’s very first exhibit.

For this exhibit— Where does your bed go?—Downing is making most of the work in collaboration with Sierra Stinson, the gallery’s founder. For most of the last four years, Downing and Stinson called the apartment home and shuffled around their belongings to make it an occasional gallery. “This final exhibit is our story, about living in this space, being together, having our cat Dinah and creating and growing after we are apart,” Stinson says.

After 54 exhibits in its current format, Vignettes shifts gears and begins its next iteration as the Vignettes Collection, which will focus on exhibiting and selling art online, accompanied by artist interviews and studio visits in and outside of the Pacific Northwest. “The ultimate goal for the Collection is to import and export out of Seattle,” Stinson says.