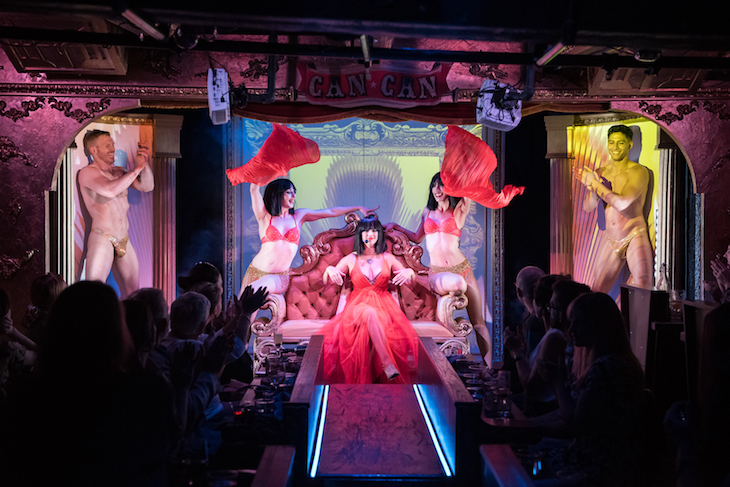 There’s a sequined ass just inches from this grey-haired man’s face, but he’s only got eyes for the flesh on his plate. I, on the other hand, can’t stop looking at him. For one thing, he’s in between me and the spangly dancers currently flexing and contorting in the slim alley performance space that cuts through the audience at the Can Can. But watching him saw at his meat and then chomp, chomp, chomp away, Hawaiian shirt silhouetted against stage lights and ass-sequins, I keep wondering, what are we supposed to be focusing on here? What is this evening even about?

Before thinking too hard about it, I swivel around in my chair to stab into my bowl of cauliflower fritters (two thumbs up, very good) and grab my wine glass before re-origami-ing myself to watch more of Femme Fatale, the new show at the Can Can Culinary Cabaret that somehow, despite having excellent performers and exceptional music, is also one of the most confused, extravagant events I’ve seen on stage in a while. But also it was pretty fun, and polish can be overrated.

The whiplash begins at the beginning, as our Master of Ceremonies explains the show’s inspiration, the Dutch-born burlesque dancer-turned-double spy known as Mata Hari, who died by firing squad in 1917.

“Is she pretty much the queen of cultural appropriation? Sadly, yes,” he says, slowly unbuttoning his red sequined jacket, revealing another slice of ab. “But is she also an amazing woman who paved the way for modern feminism? You better fuckin’ believe it. Ladies and gentlemen, put your hands together for Femme Fatale!”

And in she comes, our titular femme fatale, Mata Hari, as embodied by Seattle chanteuse Prom Queen, aka Celene Ramadan. Her face enters, anyway, in a silvery, kaleidoscopic video set to a slinky, pounding, Bond-theme-esque music. “The world will make up its mind about you, without you/You know you’re just a character in their show.” It’s sexy as hell—until it’s not, because once Prom Queen arrives live, dripping in her own sequins, she just kind of wanders around the tiny space because the show hasn’t figured out how to use her or why she’s there in the flesh (which maybe explains why she’s not actually there all that much).

“When I shed my skin/let the games begin,” she croons, in her poison-cotton-candy way.

But then, song over, she chirps, “Hi everybody, welcome to my show!” and then asks the emcee to hype the audience up more for her entrances, which seems kind of needy for a femme fatale?

The rest of the show unfolds thusly, more or less: sexy AF original music by Prom Queen, Pink and Pezzner, sometimes performed center stage, sometimes in the dark as the show’s four phenomenal dancers perform in the audience-alley and on the Can Can’s tiny stage proper. There are dad jokes. There are bachelorette-party vibes. There are feats of strength and flexibility. There are fans and pasties and golden banana hammocks. There is much crowd work about how much you’re going to get fucked with, audience member, and very little actual fucking-with of the audience. There are two intermissions to re-up your drinks and food (of the show’s 90 total minutes, I’d estimate that 60 of them are actual show). There is a cover of Khia’s “My Neck, My Back” that’s legit very funny.

Femme Fatale oscillates between low-key sexiness and over-the-top camp, trying to be many things to many people, pockmarked with odd transitions in mood, tone, timing and energy. The scene feels sort of cool-ZinZanni, in that it’s dinner + show, leans heavily on innuendo and purports to have a narrative that isn’t really there.

But unlike ZinZanni it’s not expensive and regressive—men in dresses, hardee har har—and, for all its aesthetic weirdness, feels warm-hearted and welcoming. Yeah, it’s a bumpy ride, but the fritters are hella good, the talent level high and the whole experience pretty delightful. The Can Can is a special place, a subterranean, red-velvet refuge in our most-visited neighborhood, and Femme Fatale is an ambitious undertaking that expands the venue’s standard burlesque-cabaret fare. If this is where they’re headed, I’m on board.