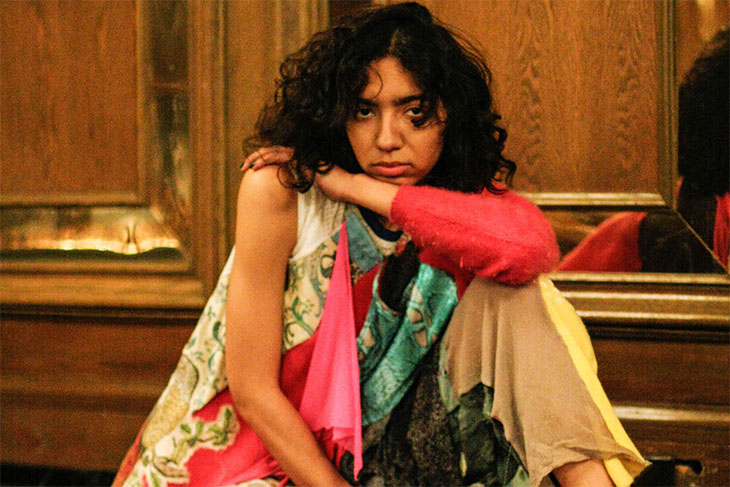 Janelle Abbott spent the summer of 2011 serving cotton candy at the Woodland Park Zoo. One day, when a colleague whipped out his phone to call their manager, Abbott noticed he’d saved her number under “Femail boss.”

“I knew immediately: I need to start an art collective under that name,” Abbott says. That fall, she assembled some fellow fashion students at New York’s Parsons School of Design to create collages and assemblages under the moniker, but the collective disbanded after graduation. Then Abbott and original FEMAIL member Camilla Carper began an artistic penpalship that quickly grew out of hand.

The artist-fashion designers had moved home after graduating—Abbott to Seattle and Carper to San Francisco—and started snail-mailing collages and, later, garments back and forth, playing a game of artistic ping-pong.

“Suddenly, FEMAIL made sense,” says Carper, because of their process and also because the name is, like most of their material, a found object. This month, FEMAIL’s first museum show, AMPM (2.0), opens at Bellevue Arts Museum.

The duo creates densely layered outfits from scraps of discarded clothes and fabric, personal mementos and consumer objects they send back and forth in US Postal Service boxes, adding and subtracting from the objects as they see fit. “The foundation of what we do is utilizing old clothes to call out fast fashion and how it’s damaging the planet,” Abbott says.

That concept is rare, even in the relatively eco-conscious art world, as is letting go of complete creative agency by working in true collaboration. FEMAIL’s approach feels as avant-garde as it is apropos.

The duo began creating unfinished clothes as fashion items in 2013. The garments have made their way into retailers such as Sassafras in Seattle, Assembly New York in NYC and Stand Up Comedy in Portland, as well as FEMAIL’s own online store. They’ve been shown at DIY parties and at Seattle Art Museum during an Yves Saint Laurent-inspired runway show. Last summer, at the art show Out of Sight, FEMAIL served up a majestic fashion parade of consumer waste items such as sunglasses, flippers and cast-off garments on a rainbow-colored carpet.

AMPM (2.0) is a massive expansion of that Out of Sight installation. “Three large tapestries, five smaller tapestries, nine garments,” says Abbott, rummaging through piles of fabric in a corner of her Fremont living room-cum-studio. “We also made five stuffed chairs,” adds Carper, joining us by phone from LA. The bright, quilted bean bag chairs join the visual patchwork in the galleries, including textural tapestries on the walls, mannequins dressed in FEMAIL garments and blobs of broken consumer items lumped together with cement.

The works take visitors on a trip through stages of material life, youth giving way to decades of growing older, perhaps experiencing loss or death, and the rebuilding of life after.

The show runs parallel to A Life in Print, an exhibition at BAM of prints by artist Alex Katz. “He’s closely aligned with elements of high fashion,” says BAM executive director Benedict Heywood. “FEMAIL deconstructs that.” AMPM (2.0) also fits his vision of BAM as a European-style Kunsthalle, a collection-less museum working with living artists rather than fussing over whether to catalogue what they’re showing as craft, design or art.

FEMAIL doesn’t bother with those boundaries either. “There’s no difference between a chair and a dress,” Carper says. “At the same time, we’re critiquing the fashion industry specifically, by not wasting materials.” This fall, the duo will debut their second zero-waste ready-to-wear collection at a store in Paris, then head to Kansas City to participate in a group show focused on female makers.

Ultimately, the artists explain, they don’t really own any of their material, not in the traditional sense. “In the end, we all die,” Abbott says. “We become dirt. The dirt grows into cotton. And then we become garments again.”