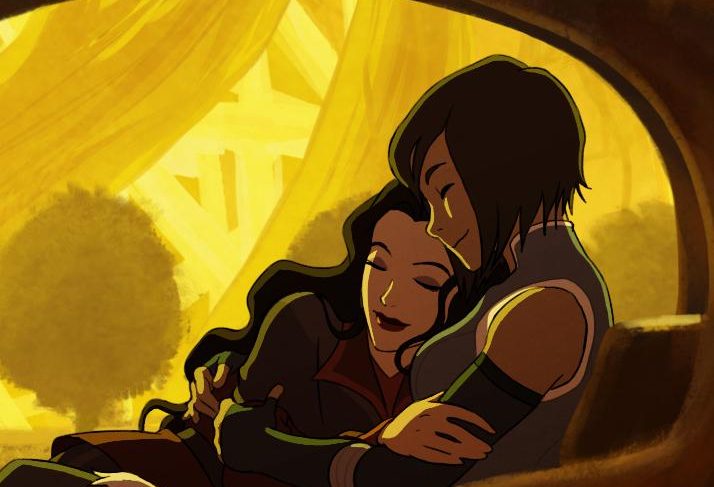 'The Legend of Korra' 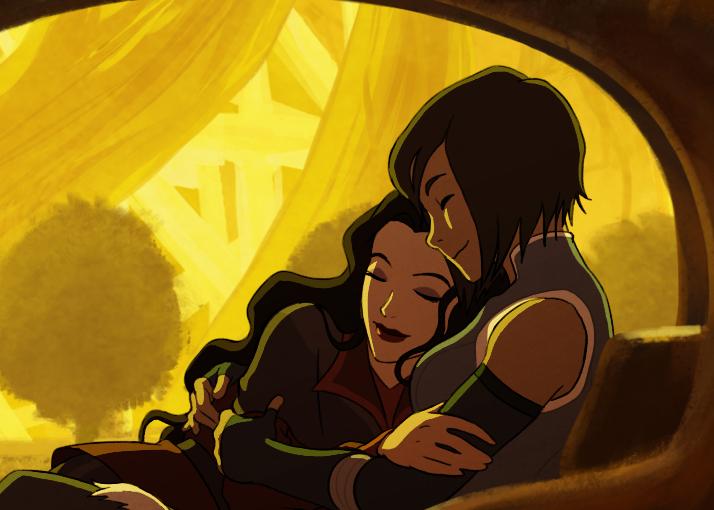 Over the past several months, I’ve experienced my fair share of “waking dream” moments. You know the kind of situation I’m talking about: the brain vibrates with that familiar feeling of somnambulant absurdity when events seem too preposterous to be happening in the real world, and yet you somehow never wake up. My father’s illness was one of those times. Starting a new job after 10 years was another—in a good way. Nothing, however, could possibly compare with the last few days. Last night, I had an actual dream in which the ocean formed a ladder up to the moon and I was climbing it. That seemed far more plausible than the way the world was when I woke up.

I can’t yet form an emotional connection with the current state of affairs. I’m definitely aware that this thing has happened, but I’m still hovering above it. I used to watch the news all of the time, but I turn it on now and people keep saying such horrible, insane things. I go to my favorite news sites and each headline seems like a piece of clumsy satire—The Onion written by a 14-year-old. I go on social media and all of the people I like and love are making grand, poetic declarations about how much they hurt, how we need to fight harder than ever now, how frightened they are, the conversations they’ve had with their children. I can’t stay on Facebook or Twitter for more than a minute or two, because the truth is, I’m not ready to accept the current reality.

If you feel the same way, I have some pretty solid recommendations for burying yourself in stellar, long-form entertainment that couldn’t be further removed from the real world. Let’s blur the pain together, friends.

Take as much time as you need. And then let’s get out there and fight this thing.

Lord of the Rings Series, Extended Edition (3 movies, 12+ hours)
Remember Peter Jackson’s amazing adaptation of Tolkien’s peerless classic? It’s still pretty damn good, and it takes place like a million years ago, which is a nice, safe distance from 2016. It’s got clear lines between good and evil—good winning in the end (God forbid)—and the extended editions are even longer than the already absurdly long theatrical releases! Twelve hours of sweeping dork drama will cleave you from the blunt obscenity of reality for at least three days if you’re working, only a day if you called in “sick” from work.

Avatar: the Last Airbender (61 episodes, 22 hours) / The Legend of Korra (51 episodes, 21 hours)
I’ve wanted to write about the Avatar series for years now, and I always suspected it might take a national catastrophe to actually make it happen. Right off the bat, let me just address the two major excuses that my friends give for not giving this brilliant franchise a chance:

Answer: Yes, but it’s the best kids show ever made. Hell, it’s quite possibly the best film/TV adventure trilogy ever made (Yeah, including Star Wars. What of it?). Fully formed, with fully realized characters, an amazing and satisfying story arc and spectacular designs/production value. It’s a perfect show and it takes place on a planet where people can physically control the elements using Tai Chi moves. Couldn’t be farther from actual Earth.

Excuse #2: “But isn’t the movie supposed to be terrible?”

Answer: Yes, M. Night Shyamalan’s ill-begotten The Last Airbender is pure garbage. But I’m pretty sure he never watched the show. He probably hired someone to watch it for him and give him the gist during lunch break. Just pretend the movie doesn’t exist—I’m sure that’s what M. Night does. The show is dynamite.

Almost as good, The Legend of Korra ran for four 12-episode seasons. It features one of the greatest female action protagonists of all time. It even features a lady+lady romantic relationship—in a popular kids series! Aside from being a great action/adventure series, Korra is a clear byproduct of the incredible strides the LGBTQ and feminist communities have made in the past eight years.

Mystery Science Theater 3000 (10 seasons, 107 episodes, 160 hours)
The actual “plot” of MST3K takes place on a spaceship, completely removed from the planet Earth—where many of us would love to be right now. Joel Robinson (and later, Mike Nelson) is being punished by mad scientists by being forced to watch terrible movies alongside his wisecracking robots. The plot, of course, is beside the point. The real joy is in watching sharp comedians mercilessly take apart shitty movies. Few things in life make me happier than this show, and there is a ton of it. Nearly seven days worth if you watched it all without sleep! I wouldn’t blame you if you did; sleep is pretty hard to come by now that our country has been overtaken by a—whoops! Was that the real world again?

DC Universe Cartoons (26 films and counting, 2 great shows, other less great shows)
DC has had a heck of a hard time launching their cinematic universe. Batman v. Superman and Suicide Squad were total crap, hated by everyone who saw them. Which was everyone. If they ever decide to make hugely profitable films that people actually like, they should farm some creative talent from the amazingly consistent series of animated films they’ve cranked out over the past decade. They’re all good-to-great and they couldn’t be further from reflections of the world as it is! Well, except for the ones where a dangerous megalomaniac takes over the world…which is almost all of them. Hmm. Still—magic lassoes? Alien guys with big, stupid bird wings? Whatever the hell is going on with Apokolips? Pure narcotizing fantasy, baby. And if you like the movies, you can also check out the Justice League animated series, and the masterful Young Justice. Since you won’t be enjoying anything resembling actual justice for the foreseeable future, you might as well enjoy a healthy dose of the comic book version of it.

Start with: Batman: Year One, Justice League: the New Frontier and Wonder Woman.

Star Trek: Deep Space 9 (7 seasons, 176 episodes, 132 hours)
DS9 takes a little while to get really good—it finally happens about midway through the second season. The nifty, regularly occurring wormhole can take you far, far away from this place. This show is a bit underrated—as far as the story elements are concerned, it’s the best of the Trek shows, hugely imaginative and admirably dense. It’s real adult sci-fi, the kind that often requires concentration.

Buffy the Vampire Slayer (7 seasons, 144 episodes, 108 hours)
I haven’t actually watched this yet. But I’m sure as hell going to very soon! Vampires? Werewolves? Those things aren’t real! Plus, there’s the deliciously unrealistic, quippy dialogue of Joss Whedon! Who wants to watch it with me?

The Martian Over and Over and Over Again (as many hours as it takes for my Blu-ray player to blow out)
The Martian is one of the rare sci-fi movies that take place in an optimistic future. The main story is about a white dude (Matt Damon) getting stuck on Mars. The whole story, however, is about the team of multiracial folks—male and female—who help bring said white dude home from planetary exile. It’s a cheerful, pro-science love-fest with zero bad guys. Even the Chinese enthusiastically lend a hand! It’s a vision of a peaceful, cooperative future that now feels impossible. But I can live in that better world as long as my TV draws breath.