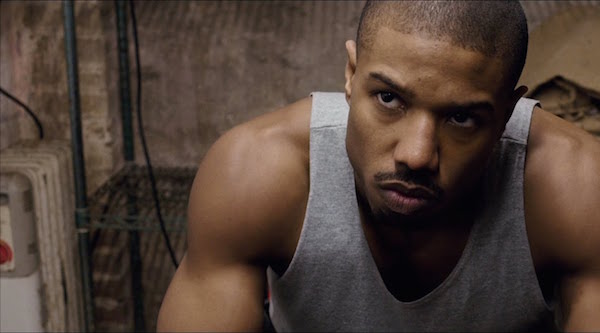 Michael B. Jordan in 'Creed'

Minutes into director Ryan Coogler’s reprisal of Sylvester Stallone’s Rocky series, it becomes clear that Creed will not fail to deliver a sequel worthy of its inheritance.

The film catches up with protagonist Adonis Creed in his early 20s: a young man haunted by the memory of his father’s untimely death in the boxing ring, unable to shake the sense that he has a higher calling than crunching data in front of a Dell computer all day. The hero’s quest is set in motion when, late one night after finally quitting his job, the wannabe champ shadowboxes in front of projected archival footage showing a generation-defining fight between his father, Apollo Creed, and Rocky Balboa.

Rocky is durable Americana. And Creed is not afraid to sample the earlier masterpiece in order to make its points about a stirred young Millennial and his family’s shaken pride.

True to the movie’s cross-generational appeal, the soundtrack of Creed succeeds as a sonic melding of trap house grit and opera house drama. In a triumphant training montage that will doubtlessly inspire millions of resolutions to lose weight in 2016, Adonis Creed bops through desolate Philadelphia streets, backed by a banging Meek Mill performance that pivots into a remix of the immortal Rocky theme. Even as Creed grapples with the fragility of professional fighters who expose themselves to punishment for our enjoyment, the montage manages to convince us that the trade-off is worth it; that an individual’s private pain can be transferred into a public story about redemption and resilience.

Adonis Creed’s triumph is not just his; it’s all of Philadelphia’s. In this respect, Creed is something close to the exact opposite of the movie Concussion. Where that dramatized NFL exposé attempts to guilt us into turning our televisions off come Sunday, Creed makes us feel as if supporting a resilient individual is an adequate substitute for supporting structural change in the hardscrabble neighborhood that produced this individual. If Adonis can restore glory to the Creed name, then maybe one day Philadelphia—a near-bankrupt city that recently shut down dozens of public schools but found the finances to build a $400 million prison—can straighten itself out as well.

By now, we’re used to cultural critics sounding off about the problematic concept of resilience. Earlier in 2015, musicologist Robin James wrote a scathing book called Resilience & Melancholy: Pop Music, Feminism, and Neoliberalism. For James, the soars, drops and performance politics of popular music mimic the rhythmic contours of crash-prone capitalism itself: Trauma is a necessary component of narratives of resilience, meaning that we consume and commercialize tragic events right alongside these narratives.

James’ core thesis was echoed in a recent New York Times article by Parul Sehgal, who wrote that “resilience places all the burden of success and failure on a person’s character.” And what would a structural critique of American capitalism in 2015 be without referencing Ta-Nehisi Coates’ Between The World And Me—a book as ubiquitously referenced as it was bleakly written? But these critics miss an important point: Symbols of hope and narratives of resilience can forecast exactly the kind of real structural and personal transformation they call for.

The Black Experience—so touchingly rendered in Creed’s pursuit of athletic excellence and his romance with a braided “around the way girl” named Bianca—is itself a resilience narrative. The story of a disprivileged population reminds America that its foundational mythos (its original creed, if you will) is the notion that “all men are created equal.”

Without the steadfast faith in and pursuit of this creed, white feminist scholars like Robin James and immigrant success stories like Parul Sehgal would have been impossible. Civil Rights activists who were spurred to action by their remarkable resilience in the face of hate did not march and die for Affirmative Action policies in American universities for the beneficiaries of those gains to call resilience “hollow.” If mounting odds against the forces of right in this country are not enough to make our leading lights want to bring the fight, then those lights are no longer fit to lead.

your endless negativity is toxic to you and everyone around you

Happy holidays, y’all. We will win.

Creed has rightfully been called the “millennial update” of Rocky. For the generation that will be charged with the task of caretaking a “silver tsunami” of aging Baby Boomers, Adonis Creed’s dedication to seeing Rocky Balboa through a health crisis should ring as loud and clear as the Liberty Bell. For Millennials, “the future,” in the words of Evergreen scholar Stephanie Coontz, “is black”: a world where we need activism, private resolve and public participation in electoral politics to combat failing institutions and socioeconomic decline. Add to these the prospect of environmental catastrophe and the looming threat of international terrorism, and the hits just keep coming.

Resilience narratives like Creed show us our strength in stylized form. They use fantasy to offer solutions that may one day become foundational fictions to the establishment of a more perfect union. 2016 will be the year we allow ourselves to feel better about our shot at winning. Attitudes matter: The fight is won or lost before you ever step into the ring.