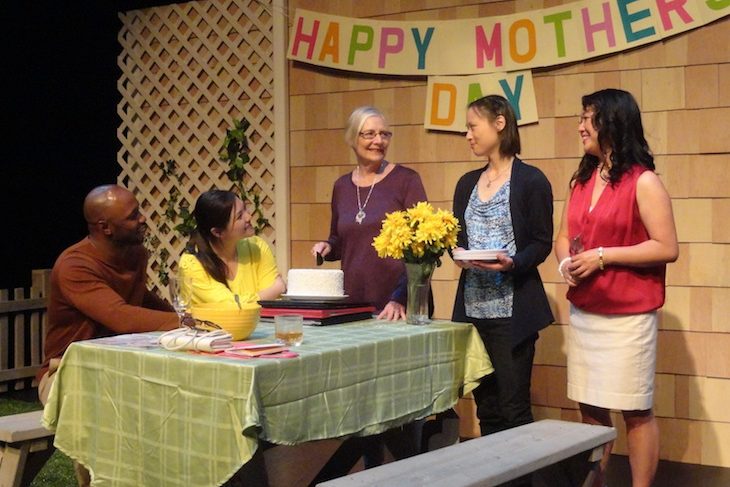 The cast of 'Family Matters,' photo by David Hsieh

Rachel Atkins’ new play Family Matters begins with a woman stuffing a thick roll of cash into a bowl of potato salad.

This isn’t a source of intrigue—we learn almost immediately that she has Alzheimer’s and is prone to odd behavior—but it is a useful metaphor for the first third of this 90-minute, no-intermission show: a bland amalgam of family dramedy clichés, the valuable stuff completely buried.

Family Matters, directed by David Hsieh for his company, ReAct Theatre, eventually introduces some interesting ideas about the limits of colorblindness when it comes to race, with Atkins displaying a similar generosity toward differing perspectives as she did in her 2014 Annex show Black Like Us. This doesn’t retroactively improve the play’s first section, which introduces Nana (Walayn Sharples), her two adopted daughters Pearl (Serin Ngai) and Lena (Katie Tupper), and Pearl’s daughter Gracie (Mika Swanson). It’s Mother’s Day, and the family is spending its traditional backyard celebration catching up and worrying about the future. What are they going to do with Nana as her memory worsens?

These people don’t behave like people but like information-delivery services making a scheduled drop-off. In turn, Pearl announces she’s been offered her dream job, Gracie admits she has a new boyfriend and Lena drops a bombshell about a big move she’s planning.

This painstaking approach to organizing the characters’ backgrounds extends to off-stage figures. Would Pearl really feel the need to remind her sister her husband is dead? Would Lena need to reiterate she’s divorced and now dating a woman? Atkins pads her script with so many biographical details, we learn nothing but an encyclopedic summary of these women.

The dialogue, delivered with deliberate over-gesturing by many of the performers, doesn’t help. “I’m millennial like that,” Gracie retorts to her mother’s admonition about texting. Where’s the follow-up gag about avocado toast?

Much of this patter is designed as the placid surface through which the real issues will burst, and things get undeniably better once the friction starts putting off heat. Pearl and Lena, adopted from separate Korean families as babies, discover they had vastly different experiences growing up in a Jewish American household. Pearl clings to the “we’re all the same on the inside” idea that they were taught growing up, but Lena can’t agree. We’re not all the same on the inside or the outside, and both matter, she says, as Tupper’s performance unbinds her pent-up emotion.

And then Gracie’s boyfriend, Antoine (Tamron Harrison), shows up. He’s Black, and things turn from contentious to hateful.

Though Antoine has the most nuanced perspective of everyone here, he’s mostly used to catalyze others’ feelings. The same is true for Nana, whose disease transforms her into an entirely new person every time she re-enters the stage. Some reactiveness makes for good drama, but it doesn’t feel fair to the characters. No scene better illustrates this discrepancy than a moment where Nana assumes Antoine is a person from her past, and he feels pressured to play along. “Don’t do it,” somebody cautioned from the audience at a recent show. He does it.

Antoine weathers abuse both overtly racist and more subtly condescending in his short time on stage, effectively making a point about how “colorblindness” is often just a rhetorical tool to ensure white people aren’t made to feel uncomfortable.

Antoine almost leaves several times, but he can’t bring himself to do it. The play has turned his feet leaden. Family Matters acknowledges the difficulty of racism, but it wants us to be optimistic that we can find common ground. So he stays. And a wound that was gouged open just 20 minutes ago gets covered with a Band-Aid constructed of family scrapbooks and cake.

Family Matters runs through July 28 at 12th Avenue Arts, playing in repertory with Annie Baker’s The Aliens, running through July 29.