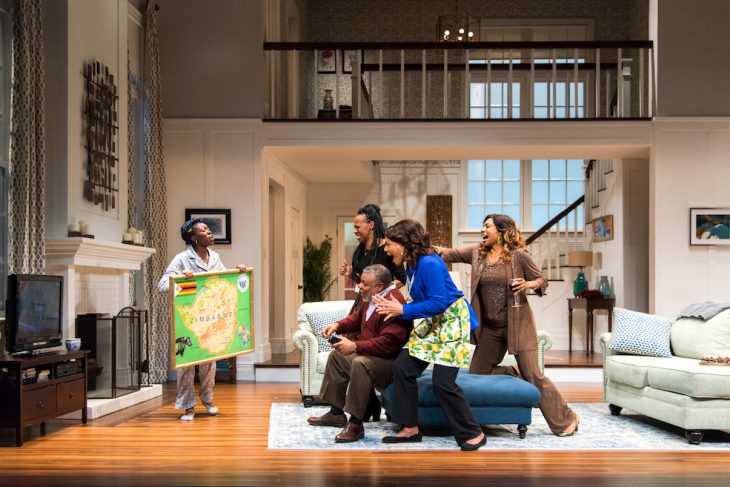 The cast of 'Familiar,' photo by Navid Baraty

Familiar is a tightly constructed mélange of a play that works marvelously well—part soap opera, part sitcom, part family drama and all heart. Written by Danai Gurira, a Tony nominee for her play Eclipsed and now a bona fide worldwide sensation for her role in Black Panther, Familiar blends all these well, familiar, tropes into a fast-moving and emotional comedy, nicely acted and stylishly directed by Taibi Magar, now running at Seattle Repertory Theatre.

Things are cozy and calm inside this Minnesota home—football on TV, snow piling up outside—but plenty of activity is a-brewing. Donald (Harvy Blanks), patriarch of the Chinyaramwira family, stands admiring a vibrant, painted map of Zimbabwe on the white-candle-filled mantle (picture-perfect scenic design is by Adam Rigg). His quiet contemplation is interrupted by his wife Marvelous’s (Perri Gaffney) vocal rejection of the design choice, followed quickly by the boisterous entrance of their younger daughter Nyasha (Aishé Keita), bubbling over with excitement from her recent trip to the country her parents left so long ago. “So alive, even with all the issues,” she enthuses. “You read my blog, right?”

But the real reason for her return is the wedding of older sister Tendi (Shá Cage), and the reason Marvelous’s little sister Maggie (Austene Van) is there, every inch the cool, laidback aunt. Marvelous freaks a bit when she learns that her older sister, Anne (Wandachristine), will also be coming, all the way from Zimbabwe, but everything is falling into place until Tendi and her fiancé, Chris (Quinn Franzen), arrive at the house with some bigger news: They may be going full church for their wedding but they’re honoring Tendi’s African heritage by incorporating a Zimbabwean tradition before the ceremony—Roora, the bride price. And this is why Aunt Anne is coming, to handle the negotiations of Roora in lieu of a male extended family member.

The first act is so hammy at times it could use a laugh track, as Chris fumbles his way through a tradition he doesn’t understand (and Tendi, knowing little more, isn’t much help). There are physical gags, much shouting of zingy one-liners and pulling of faces—the ham level only rises when Chris’s little brother Brad (Michael Weiser) shows up to help him out, because Chris didn’t know he wasn’t allowed to speak for himself in these elaborate proceedings.

“She is my child,” Marvelous says, putting her foot down about Anne’s own agenda for Roora. “Our child,” Anne corrects her, reminding Marvy of the Zimbabwean family tradition from which she comes. As the borderline-slapstick Act One finale snowballs into the more intense second act, negotiations continue, emotional stakes raise and, yes, family secrets are revealed.

Familiar is structured to a T, to slot exactly into our expectations of a family dramedy. Playing into that familiarity is where Gurira, who was herself born in Iowa to Zimbabwean parents, has done her craftiest work, weaving micro and macro cultural clashes into an evenly, empathetically and hilariously told story.

On the micro side, there’s a contentious sibling relationship, resentment fueled by Tendi’s judgment of Nyasha’s career as a singer-songwriter and feng shui consultant and Nyasha’s view of Tendi as a boring, traditional sell-out and zealot or, as she puts it, “a good Christian bitch.”

That judgment is also very much in play between Marvelous and her siblings, not only amid the universal family problem of the presumed superiority of our own choices—Marvelous is a doctor, Maggie a professor and Donald a lawyer; Tendi is following in his footsteps—but also in stresses more particular to immigrant families.

There are tensions between those who stayed and those who left, children who resent having little connection to their heritage, parents who were trying to help them by assimilating, the unknowable cost-benefit of denying children the truth of their family heritage and the misunderstanding of cultural traditions to which you weren’t exposed, illustrated nicely by Donald and Marvy’s flummoxed faces at seeing their children seek out what they left behind. “You didn’t want to learn!” Marvy tells an indignant Nyasha, asking why her parents didn’t teach her the Shona language. And there’s the ubiquitous issue of money: who has it, who’s “earned” it, who deserves it. “She acts like she’s Queen of America,” Anne complains of Marvelous.

But macro, micro and everything in between, this is a growing family muddling through its own unique choppy waters, remembering how to love each other when it might be easier not to. If that’s not familiar, I don’t know what is.

Familiar runs through May 27 at Seattle Repertory Theatre.