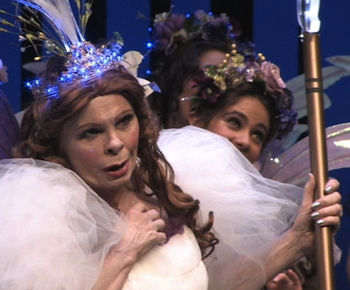 Every year, Seattle Gilbert & Sullivan Society outdoes itself. Each year, I think it can’t get better than this, and every year something new and delightful crops up. The current production of Iolanthe, which runs through July 28 at Bagley Wright Theatre, opens to a scene of night sky with thousands of tiny lights hanging from trees. Behind them is what at first we imagine to be a very busy night of shooting stars but we come to realize are fairies whizzing about their business while the Overture plays.

But even before that, producer Mike Storie who is out front to ask people to turn off cell phones, demonstrates with an antique telephone, the kind you dial with a single number, hold the receiver piece to your ear like an ear trumpet, and hang up on completing the call (why we still say hanging up the phone). Of course, Seattle G & S goes a bit further: Storie’s phone has an 18-inch GPS antenna to pull out with a penlight at the end.

Iolanthe is as absurd a story and has as charming music as any written by librettist William Gilbert and composer Arthur Sullivan (the pair wrote 13 unique operettas, all of which have remained in production somewhere in the world ever since their premieres. Iolanthe was first produced in 1882 at the Savoy Theatre in London).

Suffice it to say that the story involves members of England’s House of Lords and a bunch of fairies, a young man who is half fairy (from the waist up) and half mortal (from the waist down), his fairy mother (banished in disgrace), the girl he wants to marry, England’s Lord Chancellor, the Fairy Queen and a private in the Grenadier Guards. However, like all the G & S output, Iolanthe makes points pertinent today, and every performing company adds some sly topical updates. Iolanthe’s digs at Parliament apply equally well to Congress particularly in an election year.

Seattle G & S is a largely amateur company with members who may begin as young singers, progess through the company including backstage, and may in their 70s still be out there painting, sewing, building, lighting, manning the box office and more. Christine Goff is by day a loan officer at Bank of America. She joined Seattle G & S in 1991, sang leading ladies and now is the company’s gifted stage director.

Dave Ross (KIRO-FM), fast-talking, lightfooted, quickwitted and devious as the Lord Chancellor, is as always a delight to hear and watch. Alyce Rogers brings excellent comic timing and dramatic skills to her role as the Fairy Queen.  Rachel Brinn as Iolanthe carries her role well, while Hayley Gaarde as Phyllis and John Brookes as Strephon look and sound perfect as the young lovers—kudos to costume designer Candace Frank for Phyllis’s enchantingly pretty outfits. The choruses of fairies and peers of England’s House of Lords are an important part of the proceedings and fill their roles admirably.

It can be hard to hear all the words some of which are sung at warp speed, but it doesn’t really matter. The story is clear.

Conductor Bernard Kwiram keeps a sprightly pace with his small orchestra, supporting the singers and never overwhelming them.

After the performance, the cast mingles with the audience in the lobby, to answer questions and show off costumes. It’s finally possible to see how the fairy wands work and how the peers and the Grenadier Guard suddenly sprout wings.

Pictured above: Alyce Rogers, as the Fairy Queen, sings of her ardor for Private Willis, a mere mortal in The Seattle Gilbert & Sullivan Society’s production of Iolanthe, which runs through July 28 at the Bagley Wright Theatre at Seattle Center. Tickets at brownpapertickets.com.