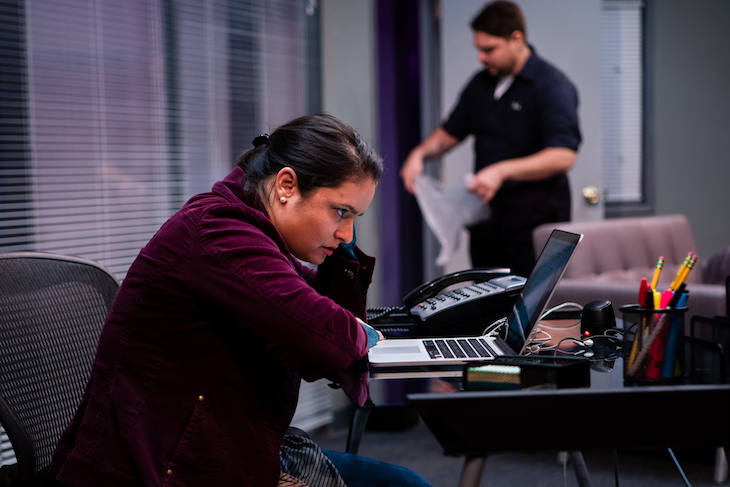 Tanya Saracho’s Fade, a two-hander set entirely in a barebones TV writer’s office, drips with contempt for bad television. Lucia (Ana María Campoy), a novelist brought in ostensibly to lend some authenticity to a show about a Latina cop, fires up an episode from the show’s previous season on her laptop, and cringes.

“All they’ll ever see is my brown, brown skin. It’s my curse,” the cop intones solemnly. Later, her male colleagues discuss her. “Who is she?” one asks. “That you’ll never find out, my friend,” replies another. “That’s her Latin mystery.”

Campoy pulls a horrified face at the shitty dialogue, and Saracho, who’s written for TV shows Looking and Girls, couldn’t make her condescension read louder. But the dialogue in Fade can be almost as risible, and Saracho isn’t nearly as skilled at burying her plot’s contrivances as your average episode of a cop procedural. Directed by Pilar O’Connell, Seattle Public Theater’s production struggles to wring humor or poignancy from a script that possesses the appearance of these qualities without the substance.

When Lucia first arrives in her office, it’s after-hours, and the only other person around is the janitor, Abel (Marco Adiak Voli). Lucia barks at him in Spanish to fix the shelf she just broke. Like everything he does in the play, Abel repairs it quietly and patiently.

A few days later, Lucia is shocked to find he speaks English, and the way they jockey to establish their identities is the play’s best scene. He was born in the United States but identifies deeply with his Mexican heritage. She was born in Mexico but calls herself a Chicagoan. They spar over their accents and the difference between Mexican, Mexican-American, Hispanic and Latino (“If you want to get technical, the term is now ‘Latinx,’” Lucia scoffs).

After their anti-meet-cute, where Lucia easily slipped into her role as Abel’s superior, she’s eager to make amends with one of the few other non-white people in the place. To him, she’s just a fresa, a spoiled rich kid who has much more in common with the Tesla-driving head writer upstairs than with him.

Nevertheless, there’s chemistry here, though less than Saracho may think. The two become friends over late nights of beer and pizza as she frets about making her story pitches feel true-to-life and he hesitantly obliges to provide some background detail from his own past to help her out. His life story—and a secret about it he carefully guards—is the play’s narrative lynchpin, and it becomes crushingly obvious where this is all headed as Lucia greedily copies down his stories verbatim.

While a bit about child custody in Abel’s backstory strains credulity, he’s a recognizable human, and Voli’s disarming performance unfolds gradually as his defenses drop. Lucia, on the other hand, has been saddled with so many foibles by a playwright trying to imbue complexity that her humanity is imperceptible. She’s clueless about basic details of her job and prone to obnoxiously self-righteous pronouncements. (She scolds Abel twice by reminding him we’re living in “Trump’s America” and once by calling him “Donald J.”) She displays little interest in getting to know him aside from what he can do for her, and barely puts up a pretense about it. Campoy’s performance careens from outburst to outburst like she’s in a farce, but the character as written takes her two-thirds of the way there.

The struggle for a woman of color to make her way in an industry heavily dominated by white men is fertile subject matter, and it’s one thing for the peripheral figures to be cardboard cutouts. (Lucia tells of a fellow writer with a Trumpian orange spray-tan who corners her and sneers about her being a “diversity hire.”) But Lucia herself is only marginally more dimensional. There’s no impact when she makes the decision that will irrevocably alter her relationship with Abel; it’s just a pro forma moment that the script has necessitated.

It says something about the play that its best moments are wordless interludes where Abel vacuums the floor or cleans the windows, backed by Ahren Buhmann’s dramatic shocks of color-panel lighting. Those feel like real life.