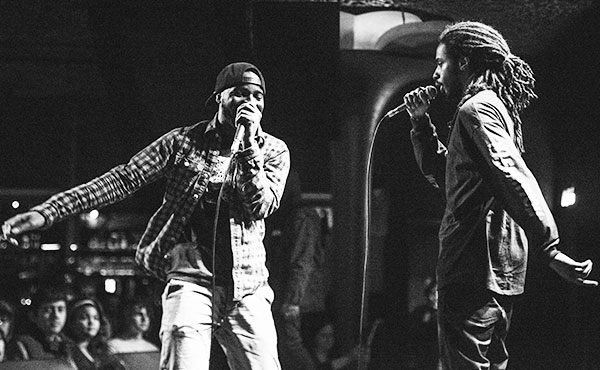 The members of ILLFIGHTYOU surround a pitcher of Manny’s at Farrelli’s, a pizza restaurant on the north side of Tacoma. NBA gleams through TVs in every corner. When the Dave Matthews Band’s “Ants Marching” triumphs through the speakers, MC UGLYFRANK deadpans, “They’re playing bangers.”

While occasionally dodging an eager bro’s pool cue, they underscore every aspect of their conversation with an inside joke, mirroring their band dynamic in person. KHRIS plays the razor-sharp mediator; GLENN the elder, not completely sobered by experience; FRANK eyes passing females, pontificating on the nuances of “paying for pussy.” Their chemistry quarters no outsiders.

But they do love pizza, and over a large pepperoni they wage battle over their favorite Tacoma pizza joints. If they’re not in the studio working on their second LP, they’re probably at one of these spots. Don’t expect them to invite you to the table.

Puget Sound Pizza: A rare moment of agreement: PSP is the best pizza in Tacoma. GLENN gives the closest thing to an explanation: “PSP is very good. I like fucking Domino’s, man. I don’t give a fuck.” FRANK says nothing but nominates Roundtable.

Cloverleaf: By far the most contentious spot on the list. GLENN mentions it first. “That shit was nasty,” KHRIS says. “You ever had those Nature Valley bars? They just crumble everywhere. That’s how the crust was. You don’t want pizza like that.” GLENN points toward KHRIS’ transplant status; FRANK nominates Roundtable again.

Roundtable: FRANK’s choice. “The buffet pizza is gross,” he warns. “Small-ass pieces.” His only other suggestion is McDonald’s. When GLENN tells him that they don’t have pizza, he says that they do in Africa. This claim goes uncontested.

The Hub: “The HUB got some fire-ass pizza, too,” KHRIS says. GLENN balks. Better than Farrelli’s? “Yes. See how he’s hurt? Luxury pizza to him is Tostino’s. Bagel Bites.” FRANK asks if anyone’s ever tried frying Pizza Pockets in bacon grease.

Farrelli’s: Our current locale. FRANK stripes the center of our pie with ranch dressing and speckles it with jalapeños. The server lingers, talking to GLENN. After she walks away, FRANK looks at him: “You think you look good, GLENN, but you ugly as fuck. She works for tips. She’s not checking for you.” KHRIS interjects with some advice. “Get a Hollister shirt, puka shells, some boot-cut jeans with holes in them. Here’s where it gets crazy: flip-flops. Thong sandals and one of those hats that’s super bent up.” GLENN responds, “Frank slept ’til 6 p.m. today. Seriously what got him out of bed was the pizza.”