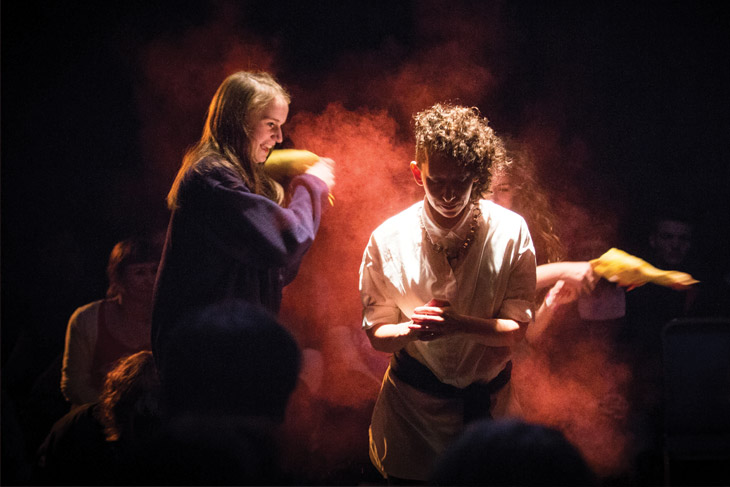 “The space of this show invites you to sit with your own envy, a common feeling that’s ugly but really should sit alongside the panoply of all the other human emotions,” she says.

Mars began conceiving Our Carnal Hearts during the 2011 riots in London, when a dearth of public services led to massive looting. In that “frenzied accumulation of stuff,” she says, those who lacked means saw it as their right to take from those who had enough. Mars also became increasingly aware of how social media leads us to compare our own lives to the shiny happy moments in our friends’ posts.

“Envy is a useful tool for those who perpetuate capitalism because it forces us to compete with each other,” says Mars, who has a background in standup comedy and live theater, as well as a writer’s sharp wit. The show allows the audience to think about these tough parts of being human “without whacking ourselves for feeling it.”

One section of Our Carnal Hearts revolves around the story of an arsonist bent on destroying capitalist society. The show’s format, Mars says, “borrows from liturgical rituals but is disrupted with storytelling and stuff that comes directly from the audience.” As a “High Priestess,” Mars stands in the middle of the theater, arranged in the hollow square formation common in sacred harp singing. Singers from the show are seated in the front four rows. (At On the Boards this month, Mars performs with Louise Mothersole and three singers.)

Original music weaves throughout the performance, including a song titled “The Humble Brag,” in addition to music from Spandau Ballet and M.I.A. Scripted chants invite audience members to describe people who make them feel deeply jealous and Mars leads a repeated verse of “We’re very happy for you!” as an exercise in exorcising.

There’s vulnerability in examining envy publicly, so to avert the audience’s human tendency to compete, she engages them in voluntary group singing. “Singing together makes people breathe together,” she says, “but I always think about the ethics of audience participation, so I don’t make anyone feel forced or manipulated.”

One of the stories Mars tells is of an old Guatemalan ritual where siblings are given live chickens to beat each other with until the chickens die, the point of which is that any feelings of sibling rivalry are shed in the beating and die with the birds. She then offers two audience members rubber chickens. “It’s funny and looks great in the show when people do it to each other, but I have to be careful when issuing invitations because it does involve getting hit,” Mars says, later clarifying that she is the one that gets hit in the show. “Over time I’ve gently altered the language so audience members understand beforehand the power structure involved in that.”

This story has been edited.