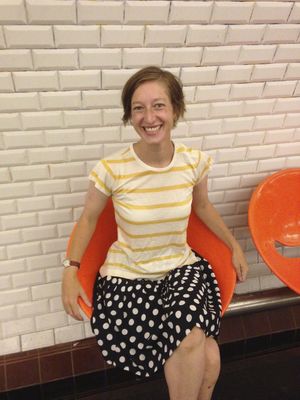 Jess Van Nostrand has been a force in Seattle for years. She cut her teeth in the arts as an independent curator 10 years ago, focusing on small venues and underrepresented artists from the Northwest. She was eventually hired as Exhibitions Curator at Cornish College of the Arts, then in 2011 she founded The Project Room, and the little storefront on 14th and Pine turned into a hive of arts-related activity. Neither strictly gallery space nor an events venue, the space is well defined by its name: Projects of all stripes happened (and continue to happen) there.

Now she’s leaving. As I write, Van Nostrand is flying back and forth between Seattle and New York, preparing to say goodbye for good. (Her shoes at TPR are being filled by artist/designer/curator Tia Kramer, who is taking over as director and who’s been working at TPR since 2012.)

I conducted an Exit Interview with her this week to capture some parting thoughts. (Thanks to Brett Hamil for letting me hijack his concept.)

Why are you leaving us?
I’ve been hired by The Museum of Modern Art to create adult public programming. This means that I’m developing and producing all kinds of events and happenings in response to exhibitions and current topics in the field. It also means that some of what I’ve been doing is staying the same but other things are changing—for example, I’m experiencing an increase in staff size by 799 people.

How did your career in the arts start and how did you end up where you are now?
Depends on who you ask. My younger brother would likely say that I started creating artistic productions at a very young age, productions in which he was often my unhappy underling (I like to think I work more collaboratively these days). My own strong memory of getting started is probably from my high school and college years. I was very involved with the music department as a singer but also craved being behind the scenes, and often did double duty as a performer and organizer of some kind. Professionally, it really began in Seattle after a dismal experience writing for an opera company in Washington, DC. In Seattle, I found that I could jump right in and people were open to a new person’s point of view. I just started volunteering at all kinds of DIY art shows and built my career, bit by bit, from there.

What do you like most about Seattle?
After living in major cities like Washington, D.C., London and Boston (where I grew up), I had the distinct feeling that Seattle was happily giving the middle finger to the rest of the country, so to speak. Whatever was happening on a mainstream level was not what people in Seattle were striving for—they were doing what they wanted to do, and this was so appealing to me. It was incredibly freeing, and I credit this attitude for the ways in which I was encouraged to try new things with The Project Room. I’ve been overwhelmed with gratitude on many occasions when events at The Project Room has been at maximum capacity. It’s a city filled with curious people who like to try new things. Thank you, Seattle.

What won’t you miss about this city (other than the weather, probably)?
I have very little patience for navel-gazing, and there have been many times during my 12 years in Seattle when I thought an art event was taking place just to give a room full of similar people a place to rant. The most important thing we can do in public arts programming is move the conversation forward, and we do this by informing our discussions with smart and thoughtful people, and guiding events towards some kind of goal. Also, I don’t really think fleece is a good look. It’s for camping. And also, people are terrible drivers here. OK, I’ll stop.

What’s the most magical arts moment you’ve experienced in Seattle?
There have been many! I have a fond memory from one of my first days in the city in 2003: I was meeting with some artists in the old and structurally-terrifying 619 Western Building and we were interrupted by some cacophony in the street below. I looked out the window and saw a haggard-looking marching band meandering down the street. I believe they were called the Infernal Noise Brigade, and their main purpose was to parade around making a collective noise. Any further purpose was unclear, and I loved it.

What departing words of wisdom do you have for people in the arts in Seattle?
I’ll use this as an opportunity to share my perspective as a (nearly) 40-year-old: Don’t worry about what people think about your work—just do the work you’re meant to do.

Image courtesy of The Project Room.