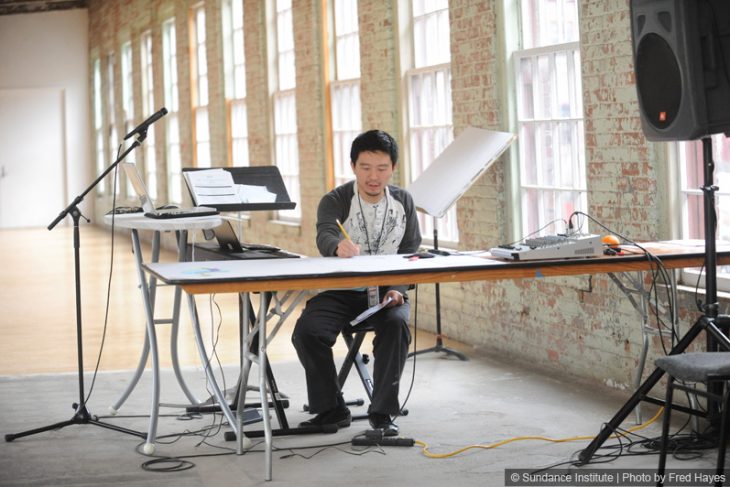 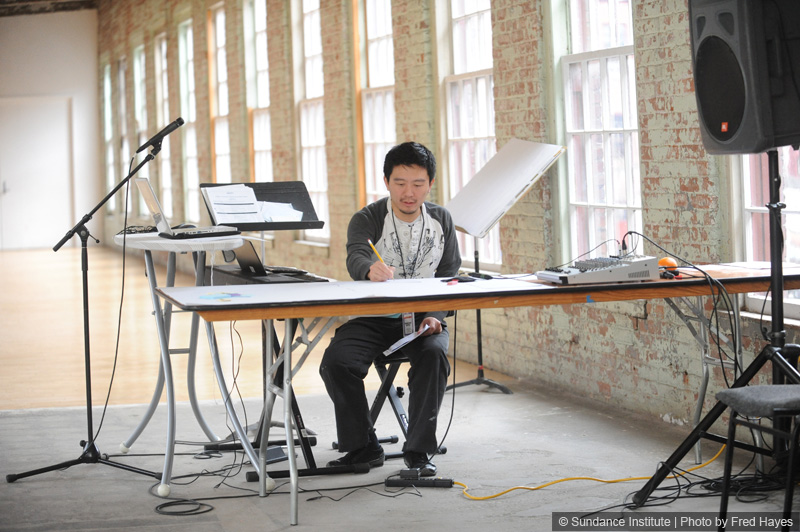 Composer Byron Au Yong has created more than 50 musical events in Seattle, ranging from solo compositions to theatrical productions. His Kidnapping Water: Bottled Operas—for hiking opera singers and water percussionists—was performed in 64 King Country waterways in 2008 and other works have been performed at Bumbershoot, Town Hall and Seattle Symphony’s Day of Music. Adjunct faculty at Cornish College of the Arts since 2006, Au Yong leaves Seattle this month to accept a tenure-track assistant professorship in the University of San Francisco’s department of Performing Arts & Social Justice. Au Yong will also serve as the lead artist working with American Conservatory Theatre and Asian American technology professionals on an audience development program funded by the Doris Duke Charitable Foundation.

This interview has been lightly edited for clarity.

You grew up here. How has Seattle supported your creative development and work as an artist? Who have been some of your key collaborators?
Along with Asian American organizations and individual mentors such as Alan Lau and Mayumi Tsutakawa, I’ve collaborated with numerous artists and organizations such as The Esoterics, Spectrum Dance Theater, Whim W’Him and the Young Composers Collective, which became Degenerate Art Ensemble. I have many fond memories of being a student at the University of Washington School of Music in the early 1990s, when some of the ethnomusicologists went to work for Microsoft’s Encarta. In fact, many of my performance art and musician friends are now coders, event planners or project managers in the tech industry.

What role has the city’s Asian American community played in supporting or advancing your work?
I’ve been involved with the International Examiner and Wing Luke Museum since 1991. Both were crucial in my understanding of equity and power as an Asian American. Their ability to quickly respond to current events as well as deeply document historic accounts informs my work. I’ve written over two dozen articles, interviews and reviews for the International Examiner, which taught me ways to advocate for Asian American artists and complicate tired narratives. Likewise, my eight years working at Wing Luke Museum in multiple capacities—from volunteer docent to weekend staff to guest curator to public programs manager—continues my approach to engaging with communities. I continue on various advisory committees, most recently writing the exhibition text for Wing Luke Museum’s KidPLACE exhibition Stars Above: Wrapped in Lullabies, opening Aug. 20.

I created work for the Northwest Asian American Theatre’s international artists program in the late 1990s. I also performed and taught with Northwest Taiko and Seattle Kokon Taiko, which connected me with dedicated musicians who play Japanese drums.

Tell me about your new role at USF and what you’ll be doing.
I’m the first composer ever hired as full-time faculty at USF. I’ll help shape the department as a collaborative composer who has studied and worked within dance, music and theatre. USF’s emphasis on service through partnerships with Bay Area organizations are essential for education to remain connected. There are seven unions on campus. Faculty, students and administration are all encouraged to engage with each other as well as San Francisco. Their tagline is Change the World From Here.

What implications may your move have on your music and composing career?
People’s faces brighten when I say I’m from Seattle. There’s a certain romance to this literary city surrounded by evergreens, water and mountains. While I’ll miss saying I’m based in Seattle, there will always be a connection. Since there’s talk of Seattle becoming San Francisco, I feel like I’m moving to the belly of the beast. The differences, though, are that San Francisco is a city with a Gold Rush history of corruption, whereas Seattle has a history of abundance taken away. To this day, our federal government does not recognize the Duwamish Tribe, even though they are the first people to live here. The land once scarred repeats patterns. While increasing rents and the tech industry make the two cities seem similar, there are deeper ways these places affect the populations. Being raised in Seattle gives me a core way of being in the world that impacts how I understand San Francisco. Being timid of gold and careful around criminals should ensure that my music floats.

What will you miss about Seattle?
I will miss my family, friends, chicken (Beulah), ducks (Parsley and Sage) and edible garden. I will miss the libraries. I will miss the independent bookstores and coffee shops and parks. I will miss going to a small venue and knowing at least half a dozen people onstage or in the audience. I will miss the cultural organizing and my friends who run places such as Velocity Dance Center and Sugar Pill Apothecary.