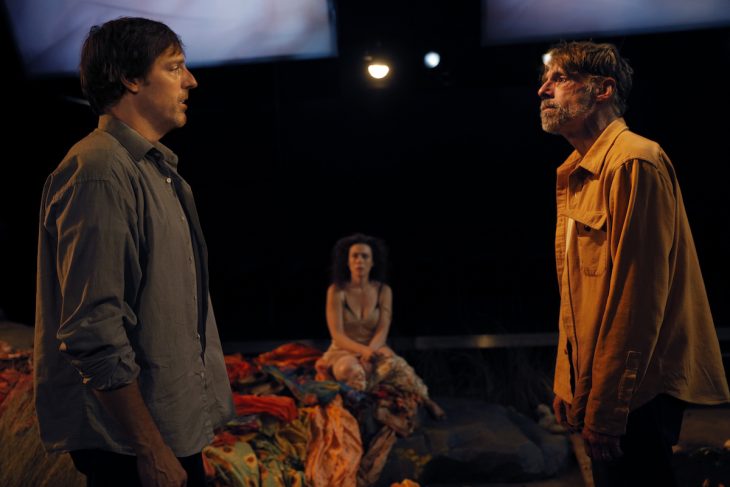 In Seattle playwright Sonya Schneider’s new play, Big Rock, Signe Sands has come to visit her newly reclusive father, and it doesn’t take long for the knives to come out. Who has time for pleasantries when there’s a whole history of dysfunction to excavate?

Is he still drinking with reckless disregard for his own well-being, she wonders? He confirms. At least the Jack Daniels doesn’t get served until afternoon.

Is she still “single and angry,” he pokes?

“Definitely,” she says, only half-sarcastically.

Like Schneider’s last play, Royal Blood, also directed by Laurel Pilar Garcia at West of Lenin and produced by Onward Ho! Productions, there’s no shortage of well-worn family drama conventions deployed here. Royal Blood tackled mental illness, bone-deep racism, gay alienation, teenage angst and suicide, with a story filtered through the eyes of a character unable to distinguish fantasy from reality. Big Rock hones Schneider’s storytelling, but there’s still a basketful of issues here: alcoholism, parental disappointment, the specter of a dead family member, a father and daughter who are fundamentally the same person. Because Schneider’s dialogue flows so naturally, the construction feels elegant even when the building blocks are schematic.

Todd Jefferson Moore reunites with Schneider and Garcia to play a variation on his crotchety Royal Blood patriarch: Harris Sands, a once-celebrated poet, who’s retreated amid a career decline to a tiny, unspecified island a few hours from Seattle. Signe (Meg McLynn), a rising star in the modern art world, has trekked from New York to the island, where yes, there is a big rock, taking up roughly a third of Julia Hayes Welch’s simple, perfectly executed scenic design of a remote, windswept place.

If this were merely a journey from the terseness of Harris and Signe’s initial meeting to the inevitable blowup, Big Rock would still be fine. Moore is a terrific actor, signaling stock gruffness before letting it melt away into a puddle of neediness and trigger-sensitive insecurity. McLynn’s twitchy uneasiness feels more synthetic, particularly as the emotions and their accompanying gestures grow bigger, but she’s a capable sparring partner much of the time.

The wrinkle in this story is its third character, who’s clearly positioned as a catalyst for the familial friction, but almost functions as the play’s stealth protagonist. Evan Whitfield’s Hamish is the island handyman/animal shelter worker/errand runner, an openhearted goof who muses about naming his new puppy Cheeseburger and says things like, “You were a poet, and I didn’t even know it.” In other words, it’s a role that seems like it was written for Whitfield, an actor who radiates wholesomeness, often with a brushstroke of melancholy.

Whitfield’s hint of sadness rounds out a character that blithely endures rejections from both Signe and Harris, coming back for more like the runty puppy he cradles in his jacket. He wants Harris to teach him to write poetry and he wants to help Signe build a garden and he’s always up for fetching the groceries and the New York Times, and does this person have any function other than provoking reactions from his considerably less gracious companions? Is he there simply to throw Signe and Harris’s emotional shortcomings and artistic failures into relief, or is he actually the most compelling character of the lot?

One could argue Hamish is a paper-thin device and a weirdly interesting person. Watching the play’s internal struggle over what to make of him ends up being more interesting than any onstage conflict.

Big Rock runs through March 31 at West of Lenin.