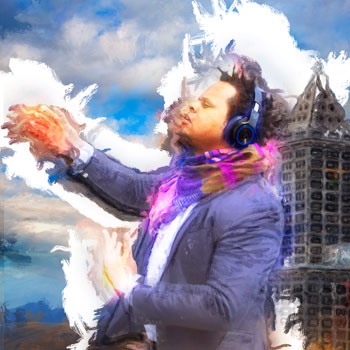 The jazz musician and composer on his biggest show yet.

Through a decade of friendship with Evan Flory-Barnes, I’ve noticed that Evan the talker is a lot like Evan the musician: eclectic, earthy, steeped in African-American cultural pursuits and codes of expression, and always impassioned.

At their most coherent—before beer and whiskey send us careening into a series of monologues—our conversations meld sports, music, relationships and spirituality, with the rhythms of one topic becoming a metaphor for all the others. Since buying a copy of his 2006 DIY album Threat of Beauty from him for $15 when he was a barista at Solstice Café, I’ve had the honor of watching Evan’s creative impulses manifest in increasingly accomplished musical endeavors: the jam sessions of his group The Teaching; his Grammy-award winning collaboration with Macklemore; the ferocity of Industrial Revelation’s legendary live sets and indelible recordings.

A stalwart on the Seattle music scene, 2017 finds Flory-Barnes, a bassist and composer, in a state of simultaneous repose and escalating intensity. While known primarily as a “supporting” musician (as if all musicians in a group aren’t mutually codependent), he describes his upcoming show at The Neptune as an act of “reassertion and reclamation.” Like a point guard who sets up his teammates through three of a game’s quarters so that he can take over in the fourth, Flory-Barnes, 38, is using his upcoming orchestral set to debut material that will eventually turn into an album (titled Love Letters from the Bohemian Triangle) and a show at On The Boards. When it’s all said and done, he will have said something about himself and his city that none of us had ever considered. I caught up with him over the phone to talk about the vision.

One of your first forays into large-scale orchestral work was the 2008 show Acknowledgement of a Celebration. What’s changed with you since then?
There was that show, which I wrote when I was 29, and another similar show in 2011 when I was 32. The music from the first show I describe as a soundtrack for one’s internal mythology. I believe that mythology—in movies or sports or in the form of classical mythology—is giving character to archetypes and energies that we all contain. Darth Vader is one aspect of all of us; Luke Skywalker is another. In our lifetime we identify with one over another at any given time, but it’s all within us, and I was grappling with that in my 20s.

For the 2011 show, that feeling deepened. I’d had a relationship experience before it, and I remember writing a piece about it called “Requiem For a Love Misunderstood.” I heard chords while walking and contemplating, then went I went to the piano and wept, while imagining [trumpet player and Industrial Revelation frontman] Ahamefule Oluo solo over it. Here I am, eight or nine years later, healing from a different relationship that went sideways. It’s no longer about innocence and naiveté—I’m going deeper now.

You described this show to me as “a reclamation of self.” Tell me more about that.
This really is a restatement of my essence: getting reacquainted with myself at the same time that I declare it. I think when you’re in your early 30s you still have this connection with all the aspirations of your 20s. By the time you’re into your 30s, though, there’s a tendency to become more resigned: you see kids on the playground and you want to do what they’re doing, instead of just doing you. So this is me doing me, refracting my influences, and providing inspiration to others to do the same. I have a few songs where I’ll be singing and playing bass. I have my solo bass set, where I’m playing tunes dedicated to my father, to my Uncle Curtis who passed recently, and to the lives lost due to racial injustice from slavery until the present day. And I have my large orchestral set. I’m describing it as Björk meets Curtis Mayfield.

You know who else is a fan of Curtis Mayfield? LeBron James.
Nice! I see where this is going.

I know you’re a huge fan of his. With the 2017 NBA playoffs underway, how have you pulled inspiration from LBJ on this run of music you’re kicking off with the show at Neptune?
Growing up playing the bass, I always wanted to be this mix of things that added up to a powerful Magic Johnson: someone who used his own force and grace to set others up to succeed. Then I started to see this player, in LeBron, that also embodied that. There’s this connection to home, and this rethinking of ideas of heroism and masculinity that James’ career has been a symbol of. He plays with a lot of trust, and joy, and love for the game. And there’s that confidence he has, in knowing he’s put in the work. That’s something that I pull a lot of inspiration from, and something I try to replicate in my own creative habits as a musician.

As somebody who blends hip-hop and classical music and a certain alternative sensibility, I’m interested in what technical problems you’re working through with this show.
When you do a show with a large orchestra, the size itself is a technical problem, just finding a way to own the grandiosity and the grandeur. It’s also about introducing these genres—or what people think of as genres—to one another in ways that aren’t academic or intellectual, but that tell a story. I watched a documentary about Coltrane recently that really made me up the ante—made me want to own what I think my contribution to music is. So this is Duke Ellington meets D.J. Premiere. It’s Ravel meets A Tribe Called Quest. It’s John Coltrane meets, you know…some European guy! [laughs]

STG Presents Evan Flory-Barnes at The Neptune on Thursday, May 18. Get tickets here.