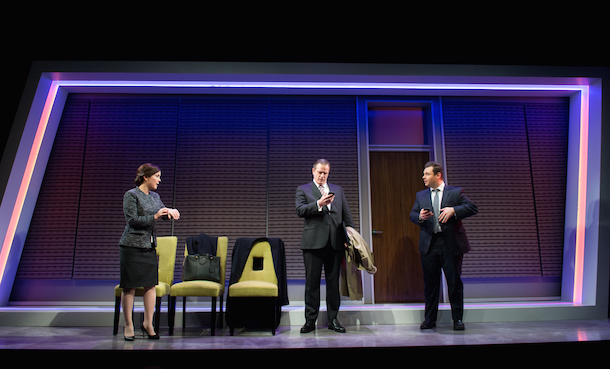 Do not be alarmed: Even though Mitt Romney’s 2008 presidential campaign inspired Sarah Burgess to pen Dry Powder, a one-act play about venture capitalists of deeply questionable morality, the production running now at Seattle Rep and directed by Marya Sea Kaminski avoids overt references to our current political nightmare. Donald Trump references could have been plastered from one end of this show to the other, easily. But they weren’t, and I’m grateful.

Boiled down to its simplest and most cynical level, Dry Powder is punchy and quickly paced play about Wall Street and corporate America—and it provides an opportunity to poke cathartic fun at cold and callous capitalists. Tres amusant, non?

There are devil’s deals aplenty in Dry Powder and lots of dubious ethical decisions. For example: Rick, the uber-rich president of a New York private equity firm (played with frantic determination and a truly beleaguered iPhone by Shawn Belyea) throws himself an obscenely expensive engagement party (featuring an honest-to-endangered live elephant) on the exact same day his company eliminates hundreds of American jobs in a deal, ha-ha. Massive protests ensue.

“Of course, they are protesting,” quips Rick’s inimitable and possibly sociopathic right-hand adviser Jenny (played with exquisite humor and laser-like intensity by Hana Lass). “That’s what unemployed people do.” For Jenny, the world is made up of two kinds of people: soulless money-grubbing, win-at-all-costs despots like her, and jealous losers. Jenny relishes her self-perceived superiority and loves taking cheap pot-shots at things like NYU and Dodd-Frank and TED Talks, and she gets all the best one-liners. (Her dry as bone-dust bon mots are the highlight of the production.)

But the protests begin to niggle at Rick’s hard little heart. Is he really a terrible person? Is all this greed and selfishness worth the loathing of humanity at large? And, worse, as the protest grow, investors jump ship from Rick’s fund. Will the public’s growing indignity and disgust someday soon begin to affect his bottom line? The horror!

Seth (a flashy and earnest performance by MJ Sieber) is Rick’s other right-hand man. Somewhat softer-hearted than his icy associates, Seth is the nascent voice of reason. He has grown guilty about the firm’s slash-and-burn vulture capitalism and endeavours to convince reluctant Rick and indignant Jenny of a kinder, gentler approach to their plunder.

Seth brings a new deal to the table: the acquisition of a suffering luggage company, with a solid plan that will save every job in the company, maintain its American manufacturing base and provide a modest return on investment. Everybody wins! But Jenny wants to cut everyone’s head off, as she is wont to do, send the shop to Asia and turnaround a quick and massive profit. (It’s just math!) Seth and Jenny square off in opposition like warring siblings on a roadtrip, taunting each other, calling each other names and comparing GMAT scores. They become the proverbial whispering devil and angel on Rick’s shoulders, respectively. Will Rick cave to his conscience or go for more gold? Can he allow public perception or cheap sentiment curb the mighty forces of Social Darwinism and quick cash?

The capable cast of Seattle favorites chews up the sleek, clean scenic design (Matthew Smucker), which frames the action as they battle it out. A nifty moving floor shifts the sets from scene to scene below a stock market-like digital ticker that establishes each scene’s time and place—the office, the hotel lobby, Hong Kong.

Instead of merely making a delightfully damning case against the agents of human greed to satisfy the souls of dyed-in-the-wool progressives like me (which it certainly does), Dry Powder also brings us face-to-face with some uncomfortable truths about humanity in the age of capitalism. After all, when all is said and done, cold and calculating Jenny comes off as the most honest and possibly the most sympathetic character of the bunch—and definitely the most amusing, if unintentionally. Her scorn and casual dismissal and of Seth’s “misguided” ideals begin to seem almost justified somehow. She makes it all seem so simple, as if math and unholy mountains of money could magically erase all responsibility for causing human suffering. Perhaps everyone can be bought for a price.