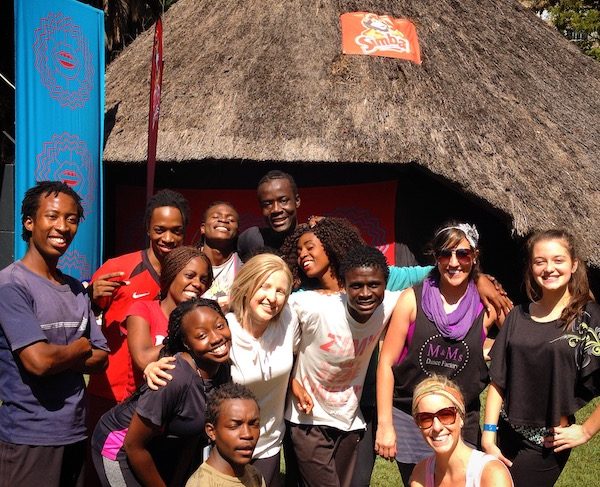 Sawyers with dancers from AfriKera Arts Trust and M&M Dance Factory, at the May 2015 dance shoot, filmed at Harare International Festival of the Arts in Zimbabwe. 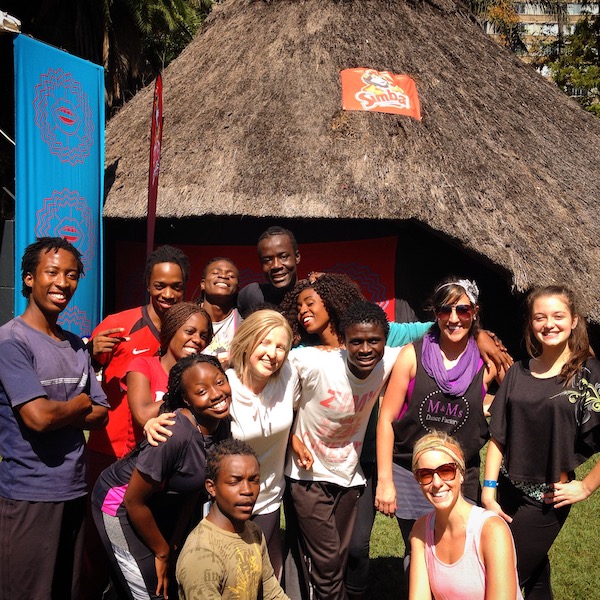 In 2014 Jessie Sawyers embarked on an international journey to create her short film The First Voyage, featuring dancers in 11 countries on six continents edited together into one cohesive dance piece. More than 100 performers participated in the film, shot in locales including a city square in Melbourne, a rooftop in Dhaka and a sunny beach in Rio de Janeiro. In every location, groups of joyful dancers shuffle and groove in unison with the blonde-bobbed Sawyers, a tap dancer who set out on a mission to bring global communities together through dance.

An invitation to teach in Australia sparked the idea, she recalls: “How might I expand this opportunity to be overseas? What am I really being called to do?” Sawyers set off with a concept, a song and a backpack with a tap board strapped to the back. She traveled for five months straight, from Japan to Brazil, piecing together opportunities to teach workshops or perform in festivals along the way. The tap dance community has “wonderful little pockets all over the world,” Sawyers says, and she relied on that network to find dancers to work with and couches to sleep on. Sawyers spent time getting to know each community and location before scheduling the shoot—usually just a couple hours that included teaching and filming the choreography. To make the dance easy to learn, she made it a variation on “The Shim Sham,” a widely-known tap dance that has ties to swing and Lindy hop. There are plenty of improvisational moments too, where dancers from different disciplines let their individuality shine.

When it came to the film’s music, Sawyers worked with jazz trio the Teaching, who she first got to know through a weekly jam session called the Hang, first at Lo-Fi and later at Lucid Jazz Lounge. “Their music has always struck a deep chord with me, and one song in particular, ‘Apex of a Beautiful Day’ by [bassist] Evan Flory-Barnes.” With its joyful energy, she knew that was her song. As with the dance, Sawyers connected with musicians around the world to add their own layers—a guitarist and accordionist from Japan, vocalist Laura Brunner in Bangkok. Sawyers connected with the American Brunner at a Lindy hop event only days before leaving Thailand, but Brunner was so inspired by the project she wrote her own lyrics to the song overnight and they recorded the next day.

Despite the challenges of reaching Africa, Sawyers was determined to spend time there to give The First Voyage a truly global energy. “Even if my means are limited, I can’t leave out the entire continent,” she says. A friend told her about Zimbabwe’s vibrant music and dance scene, so she reached out to the Harare International Festival of the Arts, which wanted to host her but couldn’t pay her way. A few months in her parents’ basement and a crowd-funding campaign later, she was off to perform and teach. In Harare she met Colleen Corley, a filmmaker from Vancouver, BC who joined Sawyers back in the states to film the final location beneath the Space Needle. The Seattle footage seems to dance around Sawyers and the Teaching as they play, adding a beautiful cinematic quality to Sawyers’ otherwise lo-fi editing.

The biggest challenge was still to come, however. After returning from her travels Sawyers ran into some serious health issues that put the project on hold for nearly a year. “I was born with a lot of birth defects; I’ve had over 23 surgeries and it’s given me this perspective on life—a huge appreciation for life and for the simplest things,” she says, “and also a deep empathy for any type of injustice.” Sawyers’ drive to make art comes from a commitment to humanitarian work. “We need people who are willing to step up in a myriad of ways through every channel possible whether it’s politics or art. Well, these are the gifts that I’ve been given: How can I utilize them to positively influence people and make a difference in some small way?”

Everywhere she filmed, Sawyers was amazed by the instant kinship she felt with her collaborators after a few short hours of making art together. “It didn’t matter that we’d grown up in different cultures. We can share and create something together in this peaceful way, celebrating both our similarities and our differences. That’s one way to actually cultivate diversity and support equality.”

Shot mostly on an iPhone, The First Voyage feels homespun, but that doesn’t diminish the essence it captures: the universal joy of moving in rhythm with other people.

“There are more trusting, kind people in the world than we tend to feel based on what we see in media,” Sawyers says. “It doesn’t mean there aren’t issues that need to be addressed. But one way to actually address them is to spread the reality of kindness.”