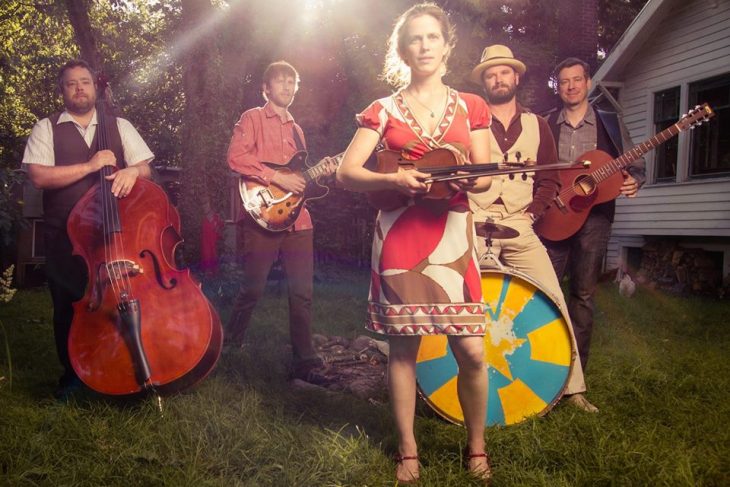 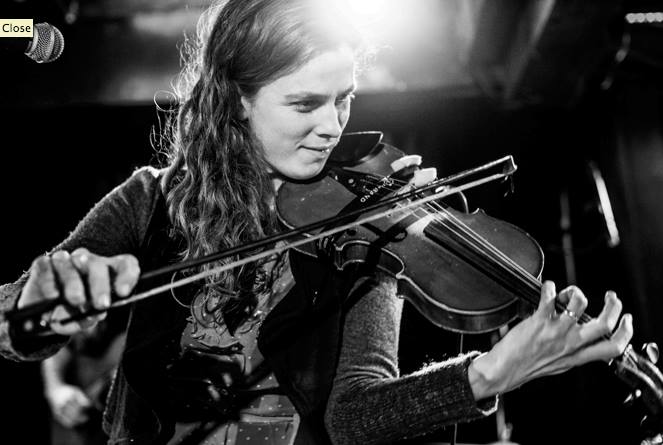 Underneath the iconic red Farmer’s Market sign, among flying fish, fresh-cut tulips, steaming cinnamon rolls and tourists with outstretched camera phones—that’s where you find “the spot.” Early every morning, Annie Ford wakes up to claim it before the other Pike Place buskers, schlepping her washtub bass by bicycle. There she meets Greg Paul and Joe Fulton, her cohorts in the Pike Place Revelers, a trio of banjo, fiddle and bass. Ford plants her foot on the overturned basin as they start into “Hey Good Looking,” her right hand plucking the taut rope, her voice echoing down the famous cobbled thoroughfare.

For more than ten years, four or five days a week, Ford’s busked at Pike Place Market, a recognizable face to visitors. The Revelers specialize in old-time music of the early 20th century, crooning in thirds and picking to classic folk tunes. An hour at a time, per the Market Association’s rules, they play in one of 13 spots designated with a painted music note. When this hour is up, the Revelers will move to another locale. For now, couples stop to listen, gleeful children dance and a woman drops a dollar into the banjo case.

This is Ford’s day job. When evening comes and the market closes down, Ford goes to work on her own stuff. Her songs for the Annie Ford Band are different than what she busks—rootsy Americana, frauht with personal storylines and stylistic risk.

Ford was first exposed to music by her mother, who sang to Beatles records and played a giant wooden pump organ, while growing up in rural Virginia. In 5th grade she picked up the fiddle, which she still plays, along with guitar, banjo, piano, ukulele, washtub bass and accordion. Though she’s only recently become comfortable with singing, her voice is sweet and clear with a touch of classic country gruff. There’s a sorrow in the way she sings, and in what she sings about.  She’s especially drawn to the vibrancy of darker stories and minor-key songs.

“Those songs are a deep well of suffering,” she says, “but also really beautiful.”

Later this spring, the Annie Ford Band will release an album of originals. The project is a processing of grief for Ford, who lost friends and collaborators in the 2012 Café Racer shooting. She and her husband Matt Manges were in groups with victims Drew Keriakedes and Joe Albanese, including the punk-klezmer Nu Klezmer Army and Circus Contraption, a one-ring vaudevillian circus. As Ford explains, “the boys” were essential in bringing her into Seattle’s musical fold.

“Crocodile Skin” is written in their memory. Ford sings with Manges in heart-wrenching harmony, “The sun drips into the scarlet sea/The starfish will light the way/To the sands of haunted shores/Where you can rest your weary souls.” The slow-lapping mood harshens into a fiddle-driven middle section, mirroring the tumult of grief. In the end, she finds her way to some peace, and the message, “I’ll meet you when the seas rise/When the burnin’ tears no longer fall.”

As she recounts the memory of writing the song, Ford fidgets in her chair. Her vulnerability is surprising, given that this is the woman who, decrying the all-male bill she was playing at the Tractor Tavern awhile back, bought a sausage and waved it around on stage. She’s infamous as Annie “Fuckin’” Ford, and yet she’s as tender as she is sharp.

Ford has four minutes until she starts busking again—just enough time to wash down our afternoon chat with a couple of Bushmills on the rocks. Then she hustles to the front of the original Starbucks, where a line of people stretches out the door and around the corner. Greg Paul is already waiting there, tuning his banjo. Ford sets down her washtub, clears her throat, and gets back to work.