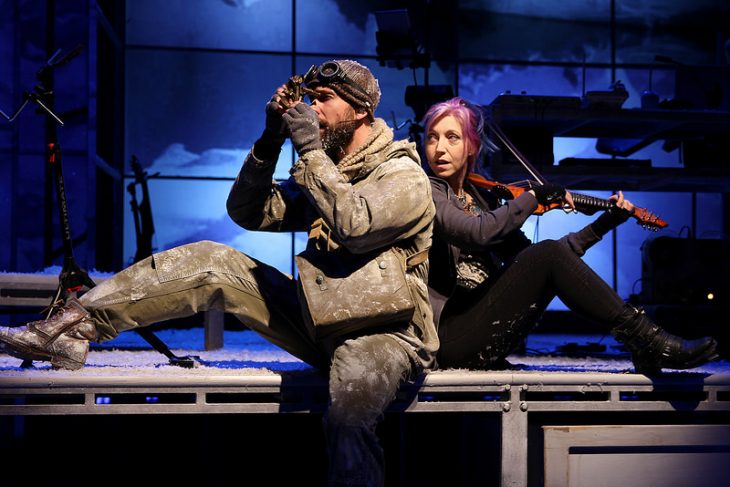 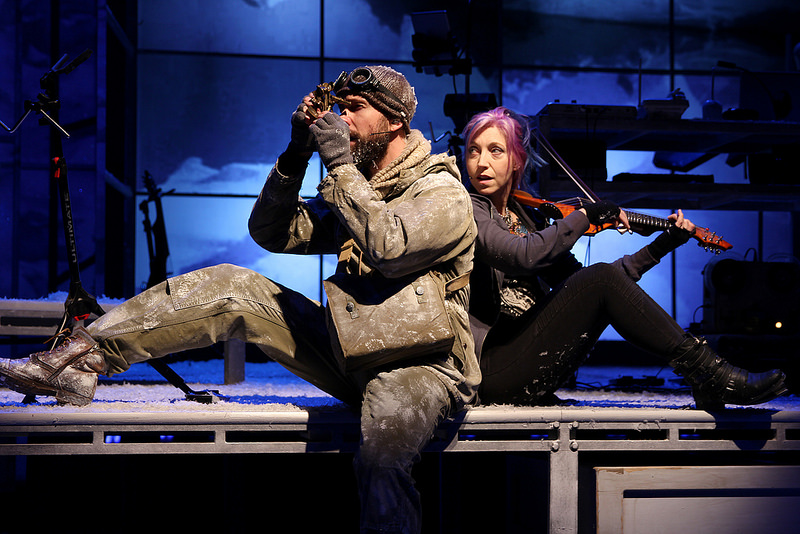 Ernest Shackleton Loves Me, the rollicking new show from Balagan Theatre, (directed by Lisa Peterson and now running at Seattle Rep), is hard to label. Calling it as a musical, while correct, doesn’t fully encapsulate the artistic hybridism running through the 90-minute production. Along with the traditional singing and acting, there is an electric violin, a banjo, and multiple large screens that act as a gateway between the contemporary world of New York-based electronic composer Kat (Valerie Vigoda, who also wrote the lyrics and also developed the idea with Brendan Milburn), and the icy Antarctic where some iteration of the 20th-century Irish explorer Ernest Shackleton (Wade McCollum) is landlocked with his crew. The intriguing storyline has the unlimited potential to take the audience in an unexpected direction, but it falls flat, wandering into a low stakes, star-crossed lovers trope. But the music’s still good—Vigoda plays a fierce electric violin.

In the tiny, heatless Brooklyn apartment she shares with her infant son, the frank, artistic Kat manipulates sound machines and recorders to create music for video games. Her on-again-off-again boyfriend (and child’s father) calls from the road—he’s travelling with his Journey cover band. Kat creates a video blog to vent her frustration, anger, and hopes for the future. One night, after a particularly grueling 36-hour composing session, Kat receives an unlikely call from Ernest Shackleton, who convinces Kat that he’s looked at her blog and is madly in love with her and her music. When the attention-starved young woman Skypes with him, contemporary Brooklyn and turn-of-the-century Antarctica merge, and the duo begins the trek through each leg of the explorer’s extraordinary journey.

At first glance, the set (Alexander V. Nichols) looks like the standard sparsely furnished urban apartment—fridge, stove, desk with computer. Everything is on a large scaffold platform, under which there are gray wood boxes reminiscent of ship’s storage containers—a slight visual hint at the blurred lines between the two fictional worlds of the play. Everything is frosty, and snow covers the stage. Winter in Brooklyn, any time of year in Antarctica. The standout is the large set of towering video screens that serve as a tri-fold background to the stage, divided into “panes” to look like windows. While they serve as a dreamy canvas for archival photos of Shackleton and his crew, as well as futuristic montages from Kat’s blog, their size also renders them oppressive. Watching a blinding blizzard whip by is overwhelming, not only for Shackleton’s crew but for Kat herself, who feels trapped by her life. More subtly, the video projections (along with some direct addresses by the actors) bring the audience into the show. When watching Kat sulk around her apartment, play music, and address her blog’s viewers, we see her computer screen as we would see it on our own browsers, only projected to 30 times the size.

Working from a script by Tony winner Joe DiPietro (Memphis), Vigoda and McCollum play their characters well, but sometimes slip into over-acting territory. Vigoda, with her punk-tastic black hooded sweatshirt and pink-and-purple hair, started out a little stiff, with under-nuanced facial and tonal reactions—to her baby, to Shackleton, to a phone call. In complete opposition to Kat’s moody, despairing sarcasm, McCollum’s Shackleton is overly confident and full of blowsy bravado, which makes for plenty of interesting and unexpected interactions in this doomed romance.

And then there’s that baby. Kat’s son Zack is only seen a couple of times, but his wailing cries constantly interrupt her work. In the end it feels like he was only there to wrap the story up with a bow, and ultimately serves to diminish Kat as a self-sufficienct woman. There are a few other elements that could be nixed—the bit about Ponce de Leon and the duel, for example, but given the short timeframe, the production is tight and swift.

Was it real or a sleep-deprived hallucination? That point is moot, because in the end the results are all the same. The metaphor of the show is simple and painfully obvious, but that’s okay because it’s universally relatable. Writing a story about overcoming obstacles and moving towards a goal will never be new, but the way it’s done can make it stand out. Ernest Shackleton Loves Me makes a huge effort, and in some areas stands out for its unique approach, while others need a little more trekking to reach that final goal.

Ernest Shackleton Loves Me runs through May 3. Tickets here. Photo by Jeff Carpenter.