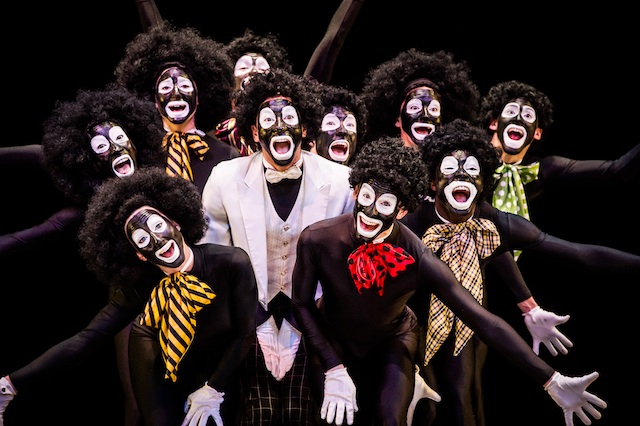 Regardless of prior “exposure” to blackface—via movies, pictures, books, TV shows, or otherwise—watching a group of performers painted and costumed to emulate a horrific, archaic form of racism is unsettling, emotional and thought–provoking. The Minstrel Show Revisited (a restaged version of choreographer and Spectrum Dance Theater artistic director Donald Byrd’s Bessie Award-winning 1991 work The Minstrel Show) does just that, and more.

The Minstrel Show Revisited takes many of the abominable facets of racism—blackface, lynching, white privilege, slavery—and turns them into entertainment with jokes, awkward audience participation, stunningly danced choreography, and monologues, all performed by highly talented Spectrum dancers. Their thickly painted faces—solid black, with white around the eyes and mouth—are grotesque, monstrous, even. Paired with tight black bodysuits, white gloves and black wigs, they make the dancers indistinguishable from one another. Cartoonish mannerisms such as bobbling heads, swinging arms and high-kicked legs dehumanize them. Blackface is all about exaggerating a false stereotype or preconceived notion of African American culture, lifestyle and history in order to proliferate that dehumanization.

Leading the way through this horror house of history, Alex Crozier, dressed in a white jacket and bow tie, acts as the show’s accommodating emcee, standing comfortably in the spotlight with a twisted, unnerving smile. The rest of the company performs superbly, and artistic director Donald Byrd appears on stage at one point, asking audience members to come up and deliver the last racist joke they’ve heard. Here, and other spoken word places in the production, the racism opens itself up past the African American focus, bringing in Jews, Asians, Muslims, gays, Catholics, etc. When they do, he has them perform as slow-talking, simple-minded, Sambo-type characters, essentially setting up a sort of on-demand form of minstrelsy.

While the entire production is riveting, one especially painful section deals with the white woman/black man dichotomy, featuring a dancer with a curly blonde wig (the utmost symbol of white womanhood) in a black corset and heels slinking around the stage while three young men watch on the outskirts until she eventually seduces them into dancing with her, until things go too far and a larger-than-life KKK Klansman comes out with a noose and drags one of the boys away by the neck. His “body” (a dummy in a bodysuit and blackface) drops from the ceiling, hanging chillingly at a moment when we don’t expect it. At one point two dancers come out wearing a single sweater and pants that make them appear to have only three legs. Like so many people in the past, Byrd turns these young black men into some sort of grotesque monsters—not as a tool to bring them down, but to show us that this isn’t just Civil War-era material. This kind of situation happens today; happens often—the white girl walks away coyly, moving on to the next boy.

The show runs through almost 300 years of racism-based history, from the early 1800s all the way through Jim Crow and Civil Rights to the present day. Updated to address specific recent Trayvon Martin/George Zimmerman case, Minstrel is a hard-hitting production that forces us to think not only about racism itself (and the atrociously prominent role it played in shaping the United States), but the ways in which we address it. How do we talk about people of races other than our own when we’re with our close friends? How do we talk about them in public? What kinds of words do we use, what “slipups” do we make in the privacy of our own homes?

Despite the insidious history that accompanies blackface, as a tool to open up the conversation about present-day racism, it is chilling, frank and honest to the core. From the first powerful moment when you see that first paint-blackened face, I couldn’t take my eyes off the stage. Byrd’s show not only spans the length of an embarassing chapter in our country’s history- it reminds us that that chapter is not finished, and sadly, racism is still alive and well in America today.