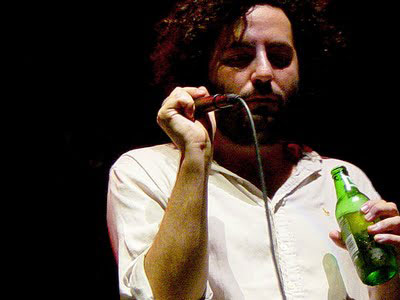 Destroyer renders the irony from yacht rock to arrive at the sound of a depleted soul. Starting out solo in 1996, Vancouver-dwelling main man Dan Bejar offered a pinched, Gibbard-esque warble and a home-recorded acoustic guitar. After joining up with Canuck superstars the New Pornographers and releasing nine Destroyer records over the years, he achieved apotheosis with 2011’s Kaputt. The record is sinister in its smoothness, its veneer of languid grooves, sax solos and synth hums suggesting a gaping, excruciating void beneath. Bejar, who now sings in a loose, louche coo, is a master of entendre, musical and otherwise. Call it uneasy listening.

City Arts: I have to start off by admitting that I only recently—like in the past two weeks—began digging into your back catalog. I love Kaputt, I know a little of Rubies, but I’m only now listening to your older stuff on YouTube.
Dan Bejar: I don’t think you’re alone in that boat. It seems the last record found its way into the hands of lots of people who never heard Destroyer before. Or who did hear and actively despised it. That’s always fun. People are not usually game to come up to you and say, “In the past I couldn’t stand your music but I like this new record.”

It seems with the last two records you’ve established a singular sound, which is vastly different from the stuff you were doing at the beginning.
Things naturally change over the course of 15, 16 years, coming on 17 years—not to date myself too much. The second Destroyer record I recorded in one sitting with just a room mic—six songs on guitar without stopping and just put that out. It was my first hand at studio recording. That was with [multi-instrumentalist and engineer] John Collins, who did a lot of the work on the last record. It’s a lot of the same faces but in different waters. And up til 2009, I still did solo shows, just me and the guitar, but those days are over.

How so?
I don’t play guitar anymore. I don’t find my approach the instrument that compelling. I just play to write songs with it. I made a concerted effort around the time of making Kaputt that I didn’t wanna wrap those songs around the same chords and chord progressions I usually fall back on. I’m sure I’ll start playing guitar again at some point, but I’m enjoying the freedom right now.

So instead there’s a lot of saxophone on Kaputt, which can be a dangerous instrument in a rock n’ roll setting.
I just like what I like. Last year, there was lost of talk about smooth ‘80s adult sounds coming back into vogue, mostly with music groups that are 10 or 15 years younger than me. That’s mostly my fault for not having made a more popular recording the past. Before Kaputt, people talked about ‘70s rock as a reference point for Destroyer, whether folk rock or glam rock.

Horns are just another instrument to me. When I hear the Stones playing sax, or sax in a Lou Reed song or Van Morrison song or Roxy Music song, I don’t blink an eye. That’s just part of my makeup. I think what we did was mix that with a lot of synth-heavy production and canned drums and fairly compressed and EQed music, which is a hallmark of ‘80s music, but I don’t think it’s in a George Michael or Spandau Ballet way. But it’s an instrument that was maligned for so long that people will continue to hear it and think of it as one thing and not as how it’s played.

Lots of trumpet in there, too.
The trumpet doesn’t get much mention, even though there’s more there than sax.

Chuck Mangione vibes.
That’s not really [Destroyer trumpet player] JP [Carter]’s scene, but if it comes off that way, it’s fine. Generally when he plays live he whips up a bunch of noise and then inserts stray melodic lines into that.

I hear your live show has gotten pretty awesome.
We got pretty good last year. There’s a bunch of us onstage; everyone is playing really good. Still probably not for everyone, but less so than before. We’re trying to make an effort to reach back into the other 100 songs I have kicking around. The tour last year was pretty Kaputt-focused. This one is more in keeping with styles that I was really into when I made Rubies in the mid-2000s, when I was knee-deep in like late-‘70s Van Morrison or ‘80s Dylan.

Do you listen to much contemporary music?
Sometimes. I try to. I kind of like getting back into the craft of songwriting that I wasn’t into for while. As far as listening to other people do it, I’m kind of getting into it again. I feel more inspired when I hear someone that’s really good. At the same time, you reach a certain age where no matter what happens you feel cast adrift. You know when the Vikings put the old person on a raft and pushed them into the ocean? Like that. I’m not sure they did that, actually, but it sounds good.

Does that mean you approach your own music differently? There is a lot of space, a lot of distance in this record, so I’m wondering if you yourself feel detached from the process of making it in a way.
That’s a good question. I don’t feel distant from the music I make, but I approach it less as an exposed nerve, which is where I was 10 yeas ago. When you’re younger, you’re constantly writing, you act fast and go on instinct. The process is much slower now. I don’t think that’s weird though, I don’t think I’m alone in being someone who’s done this for most of their adult life now and approaches it differently

As far as music at large, the scene just feels more youth-culture based than ever, so it’s ridiculous for me to try to take part in that. I could be wrong, maybe it’s always been the case, but the turnover seems ridiculous these days.

There are also a lot of musicians who grew up in the ‘80s and ‘90s, saturated with music and pop culture, who are making age-appropriate music, and a lot of it is really good.
That’s cool to hear. I hone in on the most dire, worst-case scenario possible, especially when it comes to society at large. But some part of me must cling to what you said because I’m still into doing it. And in some ways more into music than I’ve ever been. When I first started writing, it was a sickness. I was consumed by it. But maybe not really thinking about it as much as I do now. For the last few years, it’s been the first time I’ve been able to step outside what I normally do and get excited about forms of music outside of my canon completely. Which I think is crucial for me.

Like jazz and other non-guitar-based stuff?
If the guitar was something that I owned, that I could really express myself through and not just compose half-baked riffs on, then It would be a part of me, part of what I do. But it’s never been that. At some point putting it down was me owning up to embracing the role of vocalist, which always seems like an absurd casting because of my voice, I guess. It’s not typical for that role. Or so I’ve been told.

It seems that onstage, without a guitar to hide behind, you’re exposing yourself more. As a vocalist, as a frontman.
You’re right—when you’re onstage and put down the guitar, something happens. There’s a shift.

My approach has been to be as invisible as possible when I’m not singing. I think I just stole that idea from Miles Davis. I like to go into the wings and watch or sit down so people have room to move and the audience can hone in on what’s going on.

It reminds me of how someone who first heard the record said it reminded them of The Wall by Pink Floyd. I don’t know if that ties into what you’re saying…

Well, the spaciousness of Kaputt implies the space around the music. It’s reminiscent of space itself and makes me imagine a void, an emptiness. Emotional and physical.
A void, yeah… It’s pretty disembodied. There’s always been a push and pull in the vocals and lyrics in Destroyer and the music around it and it’s more of an aggressive duel in this record. It’s trying to keep things as ghostly as possible but in a very deadpan, matter-of-fact way. A lot of it is the concentration that it takes for me—I’m still getting the hang of shucking off my old vocal ticks and hitting notes in as direct a manner as possible. Let the tone of my voice, the notes, convey what’s there to be conveyed. Before I’d drift in an out of melody in a very obvious way—more like deranged speech, you know? Also the way the record was made was so discombobulated. It’s a strange mix of ‘80s lullaby vocals accompanying music that’s designed for a very public setting.

Feel free to not answer this question, but I have to ask about your relationship with drugs. Cocaine is mentioned a few times on Kaputt, and the record itself has a doped-up, somnambulant, narcotic quality to it.
I know a little bit about drugs. I can say that they definitely don’t play much of a role in my life at this point. Kaputt is a work of fiction. If drugs get mentioned, it’s because I want it to be a theme. The somnambulance was important. That’s the style of ambient music I like. I’m into ambient music, but I wanna make a pop record. And I’m into sleepy-time jazz music, but those things don’t mesh together. I wanted the record to have a decidedly urban feel. But more than that, when I think of drugs I think of someone on their deathbed or on a sickbed having visions of their life, their distant past, and maybe morphine plays a roll in that. I like to think of the Turn of the Century English officer “turned native,” as they say—that’s a good voice to write from. But I don’t know if it’s as much a comment on Bright Lights, Big City or Less Than Zero-style scenes. Which I think people jump to because the music harkens back to the production tips of that era.

I think some of those things you just said I apply to the record Avalon by Roxy Music, which I was listening to a lot in 2007, 2008, which was a template when we first started going. I thought we could use it as a template because my voice and songs are so different from Brain Ferry.

You mentioned “sleepy-time jazz music” and I thought of Miles Davis’ In a Silent Way.
I was really into that record. I’ve always liked Miles a little bit, but when I got really into jazz, which corresponded with starting this record, he just held complete sway over me, whether In a Silent Way or the Gil Evans records. There’s a distance there in everything that he does as well. But mostly it’s a mix of the most poignant, melancholic strains and the most perfect phrasing I think I’ve ever heard.