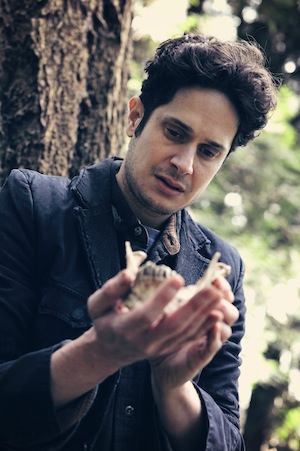 I’m standing inside a SoDo warehouse wondering who Eileen is when suddenly she appears before me, a small pile of bones swaddled in a thick, hunter green blanket carefully peeled open on the cement floor by Seattle Immersive Theatre artistic director Paul Edward Thomas. “These are real human bones,” says playwright Julia Nardin, author of SIT’s latest production, Dump Site. Whether or not they’re truly human is a matter for science, but the cast and creative team of Dump Site really want me to think they are—and they’re convincing.

Dump Site, a psychological thriller that opened last night and runs through June 7, is SIT’s third production. Simon Hamlin plays Reed Pickering, a washed-up horror novelist. As the show opens his father has just died, and as Reed and his sister Charlotte (Evelyn DeHais) go through his things they end up unearthing skeletons from their father’s past, including evidence connecting him to the disappearance of a local teen (played by Rebekah Boroughs) in the early ’80s.

The word “immersive” is thrown around as a theatre buzzword these days, but too often the shows that claim it end up being more ambulatory than truly enveloping. With Dump Site, the disorientation begins the moment you walk in the building. I stepped out of a bright, 70-degree day and into a dark, unsettling maze of cardboard boxes, built up nearly to the ceiling. Nardin leads me through the serpentine pathway out into the low-lit, old-fashioned lounge where Dump Site’s intimate audiences, 17-20 people per night, will assemble before show time.

From there, director Gin Hammond tells me, the bartender will instruct guests to remove one of the black, bird-like masks from the wall and put it on as he lays out the evening’s rules: move out of the way if an actor touches you, try not to get closer than two feet to an actor, touch whatever you want. “A mantra of ours has been, ‘If they can’t touch it, it’s bullshit!'” Hammond says. Then the bartender will show you to the first door, and the Dump Site journey begins.

Though the audience will be wearing beaked masks thoughout the nearly two-hour show, Thomas wants to make one thing very clear. “We’re not trying to be Punchdrunk,” he says, referring to the British production company behind watershed immersive shows Sleep No More in New York and The Drowned Man in London, to name just a few. But unlike Sleep No More, Dump Site has a linear narrative to be followed. The masks serve a practical purpose—if you have a sea of faces around three actors, you’re going to get distracted by other people’s reactions, says Thomas. Becoming voyeurs, instead of a group of theatregoers, helps you follow the show’s traditional story structure.

Thomas and Nardin first met in an acting class, but after seeing Nardin’s play Starling last year Thomas commissioned her to write a play for SIT. When she found out the venue would be a storage space, Nardin knew a play idea she’d been mulling over for quite a while would be a perfect fit.

“I wanted to write a story about serial killers, but from the perspective of the perpetrator’s family,” says Nardin. “There have been so many stories written about serial killers—Dexter, Silence of the Lambs, The Killing, The Following—but no one really talks about what happens to the killer’s family, what that must do to them to realize that the people they grew up with are not who they thought.”

“That’s what the story is,” she continues, “the discovery and how you cope. Do you tell mom that you maybe think dad murdered some people in the 1980s? Or do you wait until she’s dead and then go to the police? All those questions you never consider when you pick up the newspaper and see that so-and-so’s been arrested for murder. You don’t really think about that side of the story, and I wanted to tell it.” 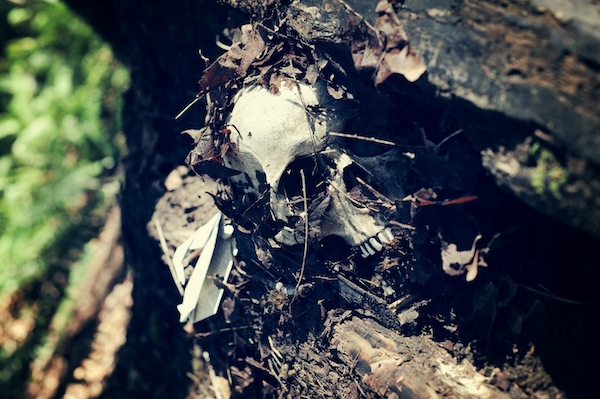 To tell this story, Thomas and his design team have transformed 8500 square feet of raw, bare space into a series of highly-detailed rooms connected by doors and small, almost Alice in Wonderland-esque portals—storage units, a room with a full SVU-style murder investigation wall, a fog-filled forest. Lighting cues, sound cues and actor cues will alert you when to move from room to room, and you’re encouraged to riffle through everything around—read notes and manuscripts, rummage through boxes. Maybe you’ll find a journal with a lock of the dead girl’s hair inside—or is she even dead at all?

This interactivity is designed to create a very cinematic feel, because there is just as much to be absorbed through exploration as there is through watching the actors (I didn’t get to see them in action, so time will tell how they fare in these unusual theatrical surroundings). Hammond has built in plenty of time for the audience to investigate their surroundings without missing scenes. “There’s stuff that goes on behind the scenes that you’d only know about by going through desk drawers and reading book and journals, ” says Nardin. “It’s kind of an interactive murder investigation in that way. You get out what you put in.”

Dump Site runs through June 7. The show’s undisclosed location will be sent to all ticketholders one week before their show date.