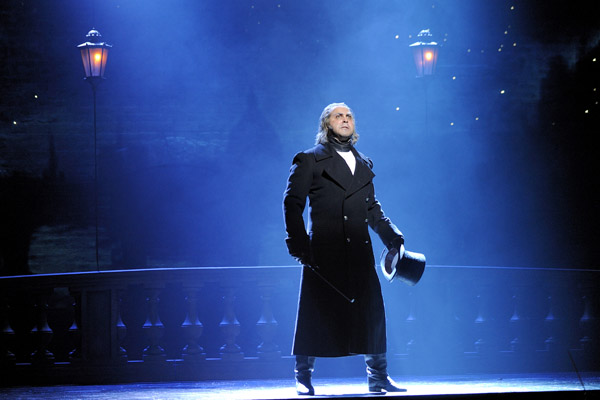 When the first bombastic notes burst from the orchestra, the energy level of the 5th Avenue’s production of Les Misérables is set—and doesn’t flag for the entire two-and-a-half hour show. Producer Cameron Mackintosh’s newly staged production is swift and fully engaging; the actors are dynamic and multi-faceted, most of the singing is strong, and the male cast members provide a jolt of masculinity appropriate for the musical’s time and setting. The females are lovely and talented, but for the most part overshadowed by the men, who stole the show’s opening night.

Based on the 1862 novel of the same name, written by French author Victor Hugo, Les Misérables explores the large and universal themes of justice, fate, love, redemption and the dichotomy of good and evil. Set against the background of the 1832 Paris Uprising, Les Mis tells the story of Jean Valjean (the remarkable Peter Lockyer), a man sentenced to 19 years in a labor camp for stealing bread to feed his starving sister and nephew. After struggling with the impulse to look after himself at the expense of others, Valjean assumes a new identity as the mayor and factory owner in a small town. When one of his factory workers, Fantine (the ephemeral Betsy Morgan) asks him to take her daughter Cosette, he obliges and saves the young girl from a life of destitution and squalor. As the years pass Valjean’s parole officer continues to hunt him down, threatening to exact justice and expose his true identity. The eventual violent uprising takes the lives of many idealistic young men attempting to guard their amateur barricade, and Valjean joins the fight for justice in order to protect the man Cosette loves.

Lockyer shines as Valjean, producing a full character arc from hardened thief to an empathetic upholder of justice. He settles into each of Valjean’s aging decades, changing into a wise and dignified man, while still retaining certain aspects of the jailed youth—flaring anger and the ability to fight. Lockyer’s singing is strong and bold and his presence powerful. He seems to always be slightly hunched—a visual metaphor for not only the weighty secret he carries, but also for the heaviness of the uncaring and self-indulgent society around him. Andrew Varela plays Javert, the policeman after Valjean, with the brash speech and confidence of a man who is sure that his moral convictions are the only right ones, and his suicide song, “Soliloquy” is chillingly moving—a standout. Natalie Beck and Joseph Spieldenner provide raucous comedic relief as the swindling innkeeper and his raunchy wife. The lead females are slightly underwhelming compared to the strong men—accessories to their stories, and Morgan’s and Lauren Wiley’s (adult Cosette) singing is frequently rushed and a bit off-key.

Mackintosh’s staging is complex and large—from the hodgepodge barricade erected by the government-fighting students to the slummy wharf where prostitutes roam, each location is unique and elaborate. The Parisian slums are erected with tall, rickety wooden buildings, crooked stairs and crowded, ragged inhabitants. The lighting is spare, often focusing on a single character, leaving the outer edges of the stage in shadow—darkness and despair around the lives of the poor, around Valjean’s past, around the corruption and political upheaval of mid-nineteenth century France.

One of the most-viewed musical’s of all time, Les Misérables is just as relevant today as it was when Hugo’s novel debuted. This epic production embraces the heart of the story—the survival of the human spirit; and what better time can the reminder of hope arrive than the challenging and uncertain times we live in today.

Above: Andrew Varela as Javert. Image by Deen van Meer.