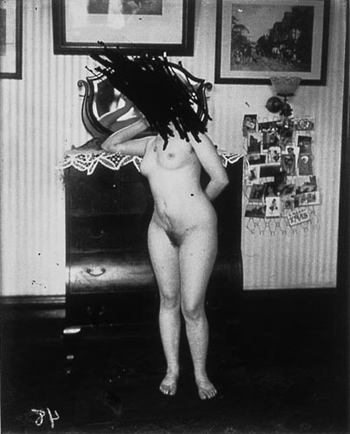 I wasn’t really feeling it Thursday afternoon. Going to the art walk, that is. It was so dreary, overcast….raining. On top of that, my date for the evening had just had her car broken into—windows smashed, purse stolen—so I was left to navigate the openings alone. At the last moment, a musician friend, E, offered to keep me company. (I like to walk with laymen when I can.)

We met at Bar Sajor for a prefunk cocktail. Gin, vodka and Cocchi Americano Rosa with some orange peel in a tumbler. Tres grownup. I insisted I take him to a dive bar later to balance it out. As I sipped on my will-to-summer (Cocchi Americano over rocks being the liquid essence of sunshine), I chatted about Davidson Galleries’ exhibit of Goya’s Los Caprichos. I noted that in my last relationship, my partner and I had made a luxurious little habit of going a few times a year to purchase prints there. Sometimes a 19th century lithograph, sometimes a contemporary Eastern European etching of something whimsical and weird. Davidson was our entrée to eventually collecting other works by local artists. When we split, some unexpected conversations about the work in our collections cropped up. Some pieces were immediately dismissed with contempt. (“I never liked it.”) Other pieces were non-negotiable objects of desire.

In hindsight, I found the breakup art criticism fascinating. Why didn’t he tell me when we were buying them that he thought so-and-so’s paintings were horrible? Why didn’t I tell him at the time that I didn’t love his taste in contemporary Estonian printmakers?

The moral of the story is, for the purpose of this column, let’s not wait till the breakup to get honest about art. Let’s for a moment err on the side of honesty rather than keep mum while administering polite pats on the back.

So, honestly, besides my orange-peeled adult beverage, I found little to be thrilled by at the openings. The exception was David Byrd’s Introduction: A Life of Observation at Greg Kucera Gallery. This is the first ever exhibit of an 87-year-old man who has been painting privately all his life. He worked as an orderly in a psychiatric ward at the Veterans Administration Medical Hospital in Montrose, New York for three decades. He painted everything he witnessed. When we first walked into the gallery, I wasn’t overwhelmed by the lusterless oil paintings hung on the wall. Mostly of stuff like landscapes, laundromats, carnivals and domestic spaces, these paintings are mundane and echo the style of half a dozen artists. Some are dappled like Seurat; some recall the uncanny light and shadows of Giorgio de Chirico’s cityscapes. 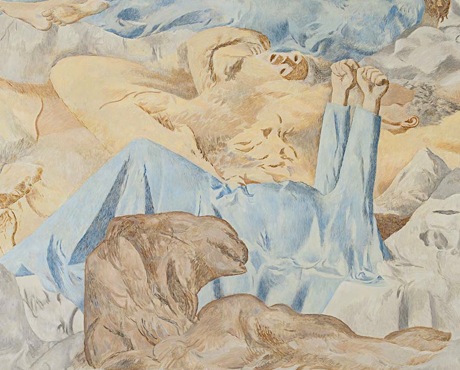 WHEN A PLASTIC BAG TRANSCENDS ITSELF
Next stop, the dive bar: McCoy’s Firehouse Bar & Grill. Next time you’re gallery-hopping, I insist you stop in. Because if the art turns out to be bad, at least McCoy’s is good. Almost as good as an installation, in fact. Firefighting gear festoons brick walls: hoses, brass, helmets, reflective tape and humongous tv screens. They also have dozens of flavored vodkas, including marshmallow and whipped cream!

E and I sat down and sipped beers. Tucked away in a little corner, facing the bartender, is a vintage 13-inch surveillance monitor. It looks funny surrounded by a flock of plasma flat screens. The picture on this monitor is blank except for a single incandescent bluish-white line running vertically down the center. This line flickers and trembles just barely. It looks almost like video art. It’s the nicest thing I’ve seen all day.

The bartender doesn’t even understand what I’m pointing at for a while, the walls are so packed with flat screens and hoses.

“Oh, that monitors the downstairs. People used to drink down there. The feed is dead though.”

“Can we still go downstairs and drink?” I wonder.

I get a little lump in my throat as I contemplate the dead feed video art. It’s so simple, so perfect. Then feel like an idiot, like the guy in American Beauty obsessing over the bag blowing around in the wind. But people put a lot of work into these art exhibits. They manufacture objects intended to get our minds lathered up, get us sensitive to the sublime, to the spiritual, to everyday objects. Perhaps my intense appreciation of a dead feed at a dive bar means Art has already done what it set out to accomplish for me today.

I suspect I’m beginning to sound like a bad cliché.

“Hey, let’s do shots of whipped cream flavored vodka with Reddi-wip,” I say to E.

“But we’ll need it for looking at more art.”

He persists in declining.

He’d live to regret it, I was sure. Well, maybe not entirely. Be positive!

BECAUSE SOMETIMES IT PAYS OFF 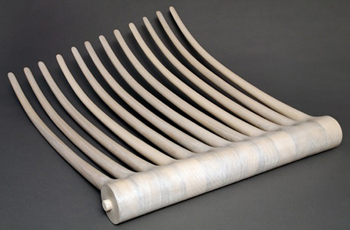 We walked to the TK building and stopped at Platform. Platform’s shows are usually spare and tasteful and classy, as grown up as my Cocchi Americano Rosa. Which is to say, the shows can also feel a little static. But Matt Sellars’ show Formation is nice. He brings flawless finish to his product—like a ribcage sculpture carved from palest poplar. Called Little Death Hollow, it sits on a plinth in the middle of the exhibit, a ghostly artifact, a signifier of something much larger—maybe the beached, sun-bleached corpse of a god or monster. Or of an expired dream. A video is running inside a miniature leanto shack installed in a corner of the gallery. It shows long shots of oil pumps churning the land, a solitary light in the darkness drawing in delicate, winged insects, wind turbines spinning against blue sky. Overdubbing the scenery, Sellars describes his relationship to the land. For better or worse, I’ve been watching a lot of Justified lately, and despite the gentle poetry of Sellars’ voice reciting a love letter to desiccated climates kissed by sun, I kept wanting the video to cut to the opening of a spaghetti western. I wanted to suddenly laugh. Catharsis. But desert sunshine is really no laughing matter in the throes of Seattle’s April showers.

SOMETIMES IT DOESN’T
I didn’t have the fortitude to dip into SOIL Gallery. From the outside it looked like a Portland collective had installed everything and the kitchen sink. I didn’t want the high from the McCoy’s video art to be squashed. 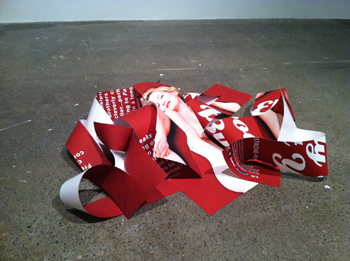 Then around the bend to 4Culture, where Matthew Hilger’s Buffalo Buffalo amused some and disappointed many more. I recommended it in last week’s column, but seeing it in person, I was on the fence. The show is so spare it makes Platform look like a Victorian sitting room by comparison. The exhibit’s statement described passages, crosswalks and pedestrian risk in such broad terms that the show could really have been about anything. One of the objects in the gallery was a pile of cut paper.

“You know that trick where you’re supposed to be able to cut a sheet of 8.5 x 11 paper in such a way it makes a hole big enough you can walk through?” he said. “I did it with a larger piece of paper. When you cut it the same way, it’s useless. It’s impossible to stretch it out all the way. It has to do with points of entry.” The poster showed the image of a naked woman. Overhead, a rainbow of stage lights pointed down from the ceiling. Riffing on Brion Gysin’s stroboscopic dream machine, meant to induce visual stimuli approximating REM sleep, we were instructed to stand directly below the cans, look up and spin. I was immediately dizzy. I was glad E had kept us from eating Reddi-wip.

“Some people shouldn’t be given space to show work,” E lamented melodramatically as we exited the gallery.

Hilger’s work is deadpan funny, taking the jokey slacker aesthetic and applying conceptual and sculptural twists to it. You have to physically engage the joke. Of course, if you’re not in on the joke, maybe it’s not that great of art? 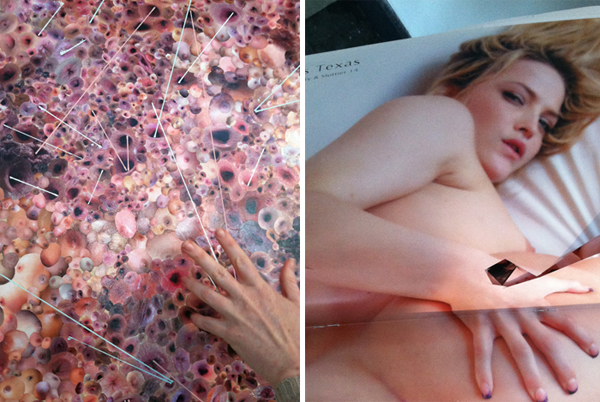 KINKADE COULDN’T HAVE PAINTED IT PRETTIER
A few days ago, Vermillion’s owner Diana Adams asked me to swing by and take a look at a piece by Alex Johnson included in the group show Never No More (curated by Brian Sanchez). He’d snuck the piece—a collage of hundreds of miniscule orifices and nipples—into the show at the last minute. From afar it’s a supernova of fleshy pinks and purples; you can’t tell what it is until your nose is nearly pressed up against it. Laser beam lines connect the dots. Below the collage, a dozen BUTTMAN magazines are stacked on a plinth. They’re the material Johnson used to make the piece, and every page is riddled with holes where the objects of desire have been cut out. It reminded me of the stunning portraits of Storyville prostitutes taken by turn of the century photographer E. J. Bellocq. Many of his famous plates are notable for having the faces or genitals agressively scratched out. In both Johnson’s and Bellocq’s images, what’s left are diagrammatic traces of compulsive desire. In Bellocq’s case, the erasures speak to secrecy and censorship. What a difference a hundred years makes: Johnson’s negative spaces (the holes where there used to be holes) are equal parts juvenile joke, Magic Eye painting and Georges Bataille’s “solar anus” rendered in flesh. I assume the magazines are included with the purchase of the collage.

THE FIRST DAY OF THE REST OF YOUR SCHLOCKLESS LIFE
Speaking of brutal art truths, did First Thursday Art Schlock really retire? Please say it isn’t so! But if it is, does that mean it’s ok to out the tumblr’s author already?

ON THE MENU THIS WEEK
Thursday is the Capitol Hill art walk. Here’s the lineup: At Hard L, MKNZ Porritt and Taylor Pinton present Makeshift (tatt my name on you girl so i know it’s real). These artists are fun, smart and keep it real (sexy). (Hard L is located near the corner of 10th & Union at 1216 10th Ave in the Pound Gallery Studios.)

True Love Gallery via ‘Mo-Wave Festival presents Polari, a group show curated by Steven Miller that examines the contemporary queer image. “The name of the show, Polari, refers to an almost extinct vernacular used both to assert and obfuscate queer identity in the 19th century.” This exhibit has a huge list of great artists as well as ones who are new to me.

Vermillion Gallery brings Night Terrors, curated by Izzie Klingels. Followed by Penetration with projections by Chris Petersen and Nick Bartoletti starting at 9 pm! (I still miss the old days of Penetration at Unicorn.)

Rodrigo Valenzuela is showing solo at Blindfold Gallery in an exhibit called (in)habit.

At Joe Bar, Tessa Hulls has some beef with a recent breakup and has made some very beautiful paintings about it in How Goes the Battle?

Also Friday night is BAM Ignite. Right now Bellevue Arts Museum is full of beckoning, good luck kitties in Maneki Neko: Japan’s Beckoning Cats—From Talisman to Pop Icon. Friday is their big night out at the museum. You’re supposed to dress in “Fellini black & white,” which sounds exactly like the kinds of parties I want to go to.

Finally, Saturday, April 13 is Sean M. Johnson’s exhibit Pieces of a Whole at LxWxH Gallery. Definitely not to miss.