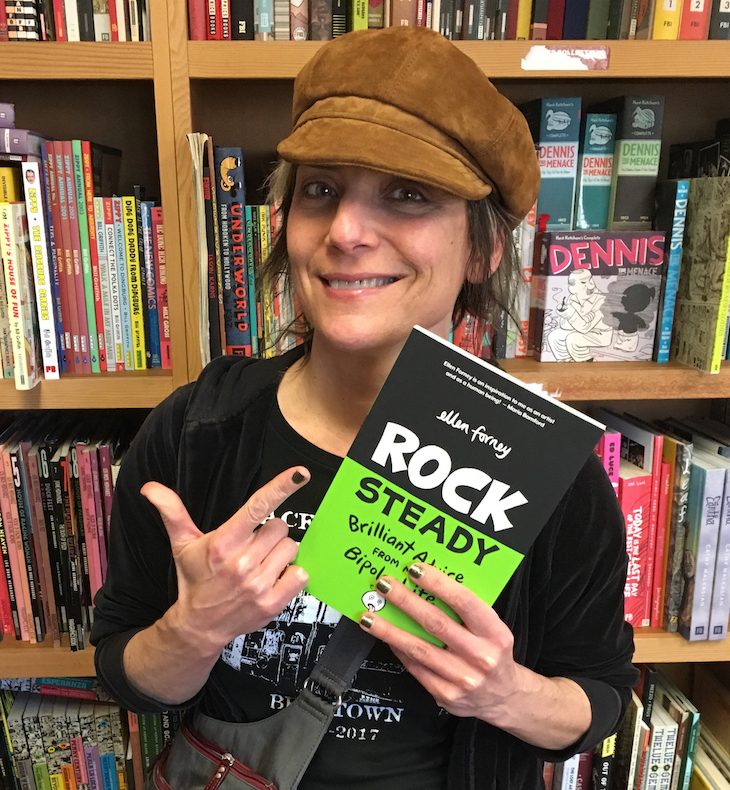 The moment Ellen Forney got her hands on her newest novel, hot off the press, at Fantagraphics.

On an afternoon in early April, the sun is emerging from Seattle’s perma-winter gloom and I’m meeting Ellen Forney, the artist and writer whose acclaimed 2012 graphic novel Marbles: Mania, Depression, Michelangelo, and Me tackled her bipolar disorder and the oft-fuzzy intersection of creativity and mental health. If you haven’t encountered her book before, you’ve probably seen her iconic walking fingers decorating the Capitol Hill light rail station.

Right now 18% of the U.S. population is diagnosed with mental illness. Whether or not that statistic describes you, Forney’s most recent volume, Rock Steady: Brilliant Advice From My Bipolar Life is a bundle of information useful to pretty much anyone. Like Marbles, it digs into hard topics through lighthearted and laugh-inducing illustration. Unlike Marbles, this sequel is less memoir, more self-help, offering an exhaustive and stripped-down array of tips and tools.

Forney, a longtime Capitol Hill resident, suggested we convene at a new local bike cafe we’d never been to, in the spirit of trying out New Seattle. Turns out the cafe had nothing caffeinated, so we resorted to espresso at a mainstay, Cafe Pettirosso, to chat about her strategies to survive and thrive with mood disorders.

There’s some glamor in the arts about being an enfant terrible, about being a bad girl, bad boy. But that condition has a shelf life. Coming to terms with mental illness forces you to adult.
With bipolar in particular, I think self-care is a part of having to grow up. Going to therapy, learning how to recognize when things are off. One of the hard things about writing this book was the subject of taking meds. There’s still a lot of shame around that. I wanted to communicate that it’s OK to take meds.

Right. Shame plays into identity so much still, despite the education.
I’ve been dealing with bipolar for a long time. Over time you learn to fold it into who you are, what you do. I want to be someone who takes care of myself. And it can be a hard transition when you wanna be an artist, an outlaw, when you want to just say fuck you!

Yeah, I’m fascinated by Frances Farmer and some of those creative giants of Northwest fame who lived a supposedly bohemian lifestyle I idealized as a child.
They throw lamps! Then have sex on the floor! To some extent self-acceptance does play into this arena too, figuring out what I can and can’t change and how can I deal with that. Like that prayer: God, grant me the serenity to accept the things I cannot change, courage to change the things I can, wisdom to know the difference. 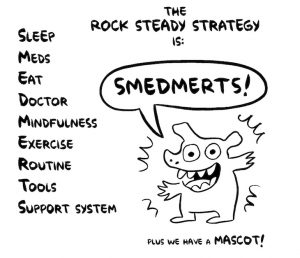 I’ve read plenty of books about routine and mindfulness. What strikes me about Rock Steady is that you emphasize kindness to yourself, being aware of yourself enough to know when to let the routine go, to find balance.
Honestly I learned so much while writing this book. Basically in the beginning I thought I was going to write a quick little companion book, like here’s the things that didn’t get into Marbles. But it grew and grew. Like, I had never heard of Dialectical Behavior Therapy before. It was developed by a doctor who works at UW actually, Marsha Linehan, who studied Zen back in the day. It’s an incredibly effective tool.

I assumed you went into this project wanting to write a comprehensive volume on the subject.
I didn’t. Marbles was so hard. It took so, so many personal resources that when I was done I didn’t want to do anything else that was about me. I thought that for five years. Then I came around and realized that this experience is still what interests me the most. I want to tell this story. But to be honest, I thought writing something so informational and less biographical would be easier—not scraping around my psyche so much!

But it was just as hard?
Yeah. Over the years many people have told me they used Marbles like a manual. I think it’s because there aren’t really a lot of resources for mental health that come from such a personal point of view. One of the things I put into Marbles was that all along I just really wanted to someone to tell me it was going to be OK. What I didn’t realize is that I’m that person now. I’m telling people it’s going to be OK. You can and will fuck up. Like the time I mixed up my pills and took vitamin D instead of my Lamotrigine on a trip.

That was one of the moments in the book where I laughed out loud, but in horror! And you took the wrong pills for how long?
Three days! I was mortified. I didn’t want to tell my doctor or anyone. Luckily for me, I guess, it wasn’t enough to swing me. Everyone’s different and that’s the idea with Rock Steady: the title even—those words are both verbs. As a human being, that’s part of life. You’re gonna travel and deal with jet lag, with grief and your mood disorder. You’re gonna be rocked and you’ve got to learn to steady yourself. Being stable is an action. I wanted to show, as someone who has dealt with this for a long time, you can learn to fold it—fold mood disorders—into what you do. It still takes effort, but over time it’s not as much in the forefront. Things will get off-kilter but you’ll get back up. And there are tools and paradigms to help you figure out how to help yourself. 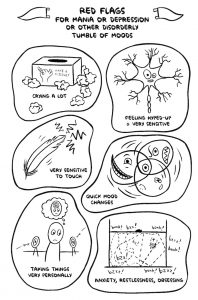 Maybe this is a dirty secret, but did you hand letter this entire book? Because there’s a LOT of text.
With Marbles, I hand-lettered the whole thing. I wanted this book to come out in time for Mental Health Awareness month [May]. I had to make the call to letter it all by hand or not. And I’ve resisted fonts and given speeches to my classes about how important hand lettering is in comics. That it’s a sort of contract with the reader, an intimacy that’s created, a pact. Which is why I winced when I realized I needed to make the call and do this thing I’d been rejecting for so long.

You can barely tell a difference.
But some of it I did do by hand, so it’s a combination, woven together. I had to admit that it serves this book to have that combo. I want both intimacy and legibility. One of the things that’s a challenge for this book is how it’s going to be categorized. If you read it as a comic, if you’re looking for a narrative, then it’s not a good comic. But it’s not supposed to be a graphic novel. If you look at it as a self-help guide I think you can see it in a really different way.

If it’s shelved along with graphic novels it’ll be funny for people to stumble onto! Is it out of line to talk about how long it’s been since you had a significant swing?
I haven’t had a full-blown manic or depressive episode in years. I’m still definitely emotional. I’m an emotional person. But I have foggy days, or emotional days, and I have to recognize them as something I need to deal with in terms of my illness—it may or may not just be a foggy day. Either way, I take note and take extra care to get enough sleep or use some of those other tools I outline. Stability is active. It means being aware.

All the red flags you mentioned, always be self-scanning.
One of the tools I learned while researching for this book is the mammalian diving reflex.

Plunging your face in a sink filled with ice water?
Yes! It really does reset you. The only caveat is some people find it really painful, so it’s not for everyone.

And of course you probably get asked often: If you could take away your bipolar disorder, would you?
It’s probably what I get asked most. Honestly I would say no. Part of it is that modern science doesn’t have a real way to do this, and for me it’s an issue of not knowing what parts of my personality would be taken with it. Like, if they could yank that gene, what else would be taken? I’m highly emotional. That’s where a lot of my empathy comes from, where a lot of my focus comes from and how I perceive things. For me it’s really connected with what makes my brain work the way it does. All these things are interrelated. Is bipolar a gift? It’s just part of who I am, so I can’t really separate that from who I am.