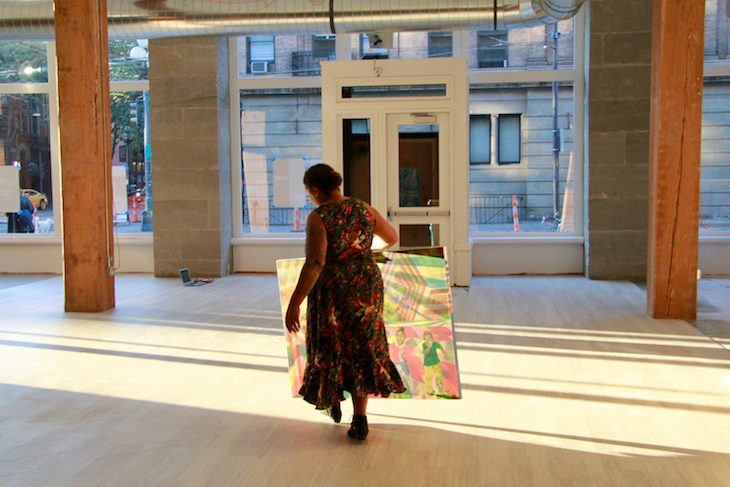 Elisheba Johnson at the 101 with Maury Diakite's painting “Appanage,” which shows in 'CHARCOAL', opening tonight. Photo by Margo Vansynghel

Some people get hung up on the question, “To be or not to be?” Elisheba Johnson more frequently asks, “To do or not to do?” Her Capitol Hill Faire Gallery Café, which closed in 2012 after a six-year run, was named after the French for “to do.” Today, she’s a public art project manager for Seattle’s Office of Arts & Culture, where she helps manifest big projects such as last year’s BorderLands. As a founding member of Collect, which takes people on gallery tours via party bus, she helps inspire art collecting in the city.

When a Denver-based company reached out to her a little over a month ago to ask her whether she’d like curate art shows for their new multi-use event space in Pioneer Square, “To do or not to do?” was the question.

“I called up three different friends and asked if I should do this,” Johnson says. “They all said yes. Back when I had my gallery, I had less than 900 square feet.” In the Pioneer Square space, she has 5,500—and no rent to pay.

“There’s a lack of spaces to show work,” Johnson continues. “To show big work, too. The next show is by my friend Jonathan Clarren. He has these huge 8-by-10-foot paintings, which I now have space for!”

The 101, as the space is called, will open officially Aug. 24. But Johnson wanted to take advantage of the foot traffic of the Seattle Art Fair to debut the first exhibition, CHARCOAL, which opens today featuring work by 19 Black and African Diaspora artists living and working in the Pacific Northwest, including Christopher Paul Jordan, Khadija Tarver, Jazz Brown and C. Davida Ingram.

When I meet her in the space to talk about the show, the early-evening sunlight gushes through the windows. In a corner, Johnson has set out some work she’ll be hanging up later: a collage by Natalie Ball next to a print of oddly headed barbie dolls by Portland-based artist Sharita Towne.

When did you start thinking about CHARCOAL?
Some four or six weeks ago, when they told me I could curate the space. It immediately came to me that I wanted the first exhibition to be all Black artists. As a Black artist working and living here, I know we’re always trying to find spaces and ways to be seen. This was an opportunity to show how varied our expressions are. I wanted to make sure I represented many different types of Black people and experiences. Yeggy Michael, for example, is Eritrean-born but grew up in Ethiopia, and Natalie Ball is a Native and Black artist.

How is it to be curating?
I consider myself a champion of artists. In my job, I’m a steward. Now, I’m in charge. I like to be able to bring my own taste into it. I had an epic tarot reading at the beginning of the year tell me that. It said, You are supposed to make your own art and also help other people show their work. I feel like this year is very much a manifestation of that. Me putting my work out there while amplifying other people in ways that feel good and authentic.

You showed your own work at Juan Alonso’s studio early this year and have a show coming up at Virago gallery in September after somewhat of a hiatus. How come?
When I was running Faire Gallery Café I did one show and felt like it almost killed me. I’d work for 12 hours running a business, figuring out other people’s shows, staffing the place, payroll, and then go home to collage for three hours—I was wiped. The further you get away from making, the less you start feeling like a maker. But over time, I realized I still had a voice and a story to tell.

What will you focus on for your show at Virago?
I’ve always struggled with my weight. In my 30s I came into body acceptance, but in a conversation with a friend it came up how people—strangers, peers, family—have said things to me that reinforced this narrative that being fat means you’re unworthy. From birth, people have the sense that they have ownership over women’s bodies. That they can tell us to lose weight or publicly shame us. I’ll be taking things that people have said to me my entire life and putting them in different manifestations of food and plates.

Can you give an example?
One of the most salient things I was told in high school was when I was looking for a prom dress and was having a hard time. Someone told me I “wouldn’t have that problem if I lost weight,” the title of the show. Overall, it’s just these types of messages that I started hearing at four or six years old. I’ll also take my favorite recipes and make them into poems. I’m famous for my mac ’n’ cheese, so that’s been a fun experiment; my first art form was poetry.

You’ve been a poet, artist, curator, arts organizer and administrator in Seattle for years. With Seattle Art Fair in its fourth year, no Out of Sight, how do you view the landscape?
We need more space to present, obviously. I think Seattle has a problem of supporting our ecosystem. Greg [Lundgren, the main organizer behind Out of Sight from 2015–2017] wasn’t able to get the same space this year. But how does the community support him to find other spaces or pay for it? That’s something that we need to be better about. We go: “Out of Sight was amazing!” But how much did that personally cost him?

So many people on the front lines have galleries that are self-funding. We go to look at the work, but are we patronizing them? Some people are not into the commodification of art, but how else are artists going to get paid in the spaces they open? Like, I make a point to buy work even though I have a six-year-old and live in my parents’ house. We need to make sure that we keep ourselves here. Being in the arts is a grind—but everybody is in it together.

CHARCOAL runs through Sept. 22. Sign up for a viewing here.