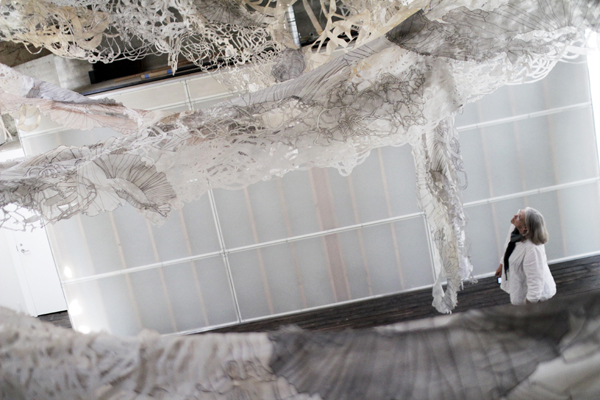 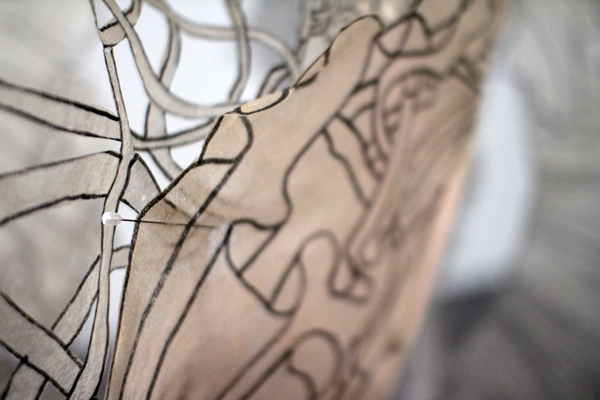 Grinnell grew up in Hanford, Washington, the site of a nuclear production facility that manufactured plutonium during the Cold War. She describes the small town, which the federal government swept in and built all at once in 1943, as eerily cookie-cutter and Disney-ish, populated with enigmatic, trench coat-wearing feds and industrial workers (like her father) who had been randomly recruited from around the country.

All of Grinnell’s work heavily references her personal history and especially her relationship with her mother, a quiet woman who spent most of her days in Hanford pattern-making and sewing garments for the family. Grinnell often works with recurring techniques and materials, emphasizing the intersection of fabric, bodies, and touch. But even if you’re familiar with her previous work, the sprawl and scale of RUFFLE (at Suyama Space) is undeniably impressive. 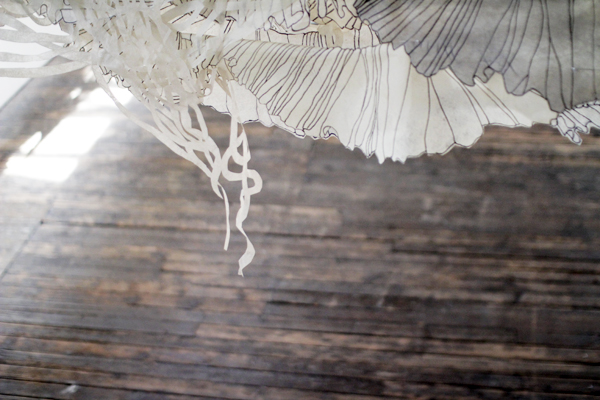 For the installation Grinnell used nothing but straight pins (sometimes long corsage pins with pearl heads pricking the folds) to connect 500 yards of gauzy polyester fabric. Every inch of the 500 yards has been covered in a lacework of meandering line drawings made with white ink or Sharpies. The fabric is draped and coiled, forming rivers of endless, crenellated softness and ivory entrails. It whorls together, flays apart. In the daylight hours, the installation is luminescent. The fabric glows. At night a dull, gold current of electric light filters through the cloth, casting filigreed shadows against the walls.

RUFFLE manages to look inviting and terrifying at the same time. Does it cocoon or consume the space?

It’s tempting to consider such a work in terms of feminine archetypes and cliché, but what underlies RUFFLE more than connotations of fairytale spiders and mothers (a la Louise Bourgeois and Kiki Smith) is the impetus of monomaniacal production that has much to do with traditional American industry. There’s a suggestion that desire (whether expressed through tenderness or violence, dresses or bombs) can be realized through the puritanical idée fixe of productivity. 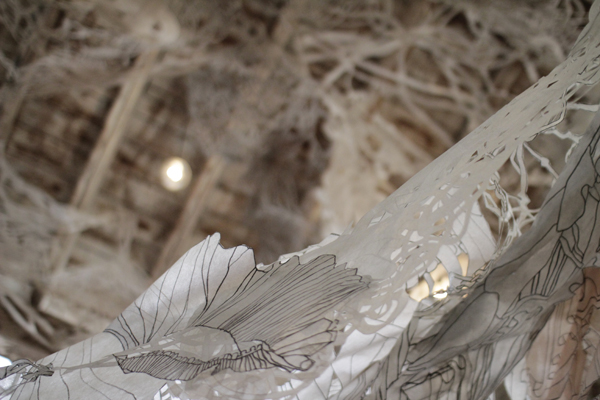 While I was visiting her at Suyama Space, Grinnell smiled as she pointed out the word CARS painted on one of the weathered wooden beams overhead, around which a length of fabric is twined. A hundred years ago, Suyama Space existed a livery stable; in the 20’s it became an auto repair shop, which it remained till its current iteration as an architectural firm and gallery. Grinnell explains that the signage is a fortuitous connection to her father, the heavy equipment machinist.

As with much of Grinnell’s work, RUFFLE resonates with this sense of desire (to touch, to be touched) expressed through excessive labor. The labor of machinist, seamstress and compulsive artist are equally present in the machine-like production of yard after yard of heavily-manipulated, sensuously-overworked sculpture. It sits well in the gallery, so full of its own ghosts and the nearby bustle of production.