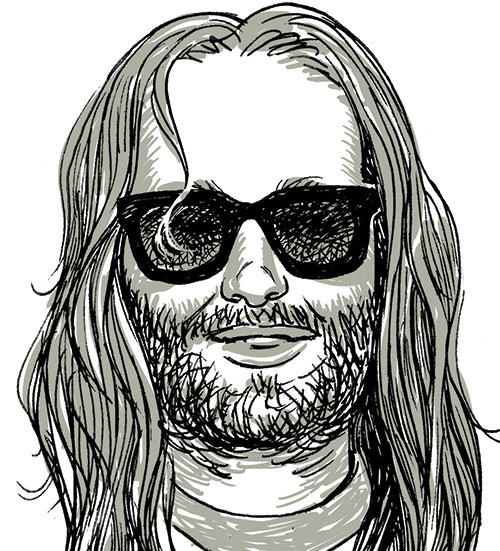 On an overcast Sunday afternoon, Low Hums singer/songwriter Jonas Haskins and drummer Mike Bayer take turns rowing around Lake Union in a little dinghy on loan from the Center for Wooden Boats. The mood, while pleasant, doesn’t match Charm, the band’s statement album coming out in May.

The songs on Charm are uptempo and layered, eerie yet poppy, the kind of intelligently crafted rock that spans genres yet feels cohesive. The kind that could only be made by a musician like Haskins, a decades-long veteran of Pacific Northwest bands like Earth and Sera Cahoone.

And here he is, intrepid captain of this mellow, doughnut-fueled voyage. Only his gray hair betrays his 40 years, though its shoulder length is about the same as in Haskins’ teenage grunge-playing days in Friday Harbor. After musical stints in Ellensburg and Olympia, he relocated with his country-rock band to Seattle in the early ’00s. A few years later, he oriented in a wild new direction as bassist for drone-metal legends Earth.

On Charm, Haskins emerges somewhere between the drone and the twang. The stomping psychedelia of “Way of the One” contrasts the banjo-tinged ponderings of “Salt Flat Sightings,” where he mournfully sings, “Flashlight in my hands/There’s nothing out here in the darkest desert sands.”

Low Hums has been a constant throughout Haskins’ other endeavors, but the band saw a significant boost after 2013’s South By Southwest. He’d played the fest many times before as a hired gun, but that year he flopped in front of giant crowds as a bandleader. His solution: “We started writing faster songs that had a better feeling to play in a bigger room.”

Case in point: Charm’s opener “It’s In The Air.” The song rides a car-stereo-friendly groove that belies vaporous guitars and inventive percussion. It’d probably sound good on this little rowboat’s boombox, too, but Haskins hasn’t touched it. He’s been distracted.

When he spies an abandoned house on the waterfront, he rows toward it, then stops to admire its dilapidation: wooden planks everywhere, burn damage, vulgar graffiti. “This makes me think about our newer song, ‘Breakdown,’” he says. “I’m trying to capture a feeling with it.” He trails off and stares at the ruin for a moment, then laughs. “Looks like there was a helluva party there.”