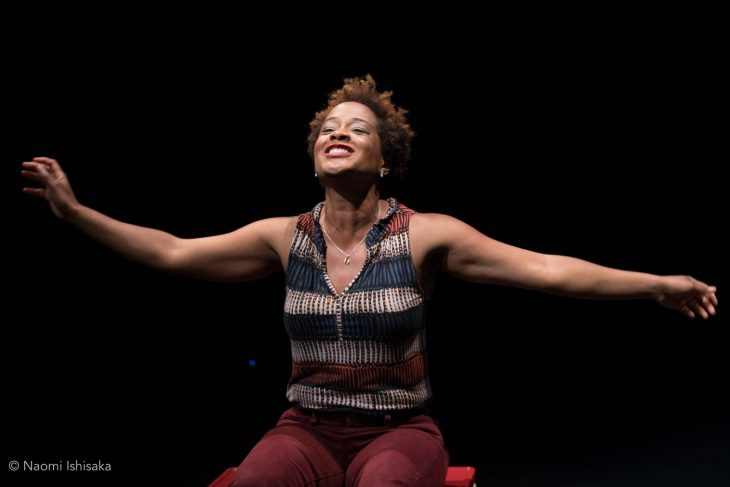 Freedom, especially youthful, stolen freedom, is intoxicating. Watching Dedra Woods on a nearly bare stage at 12th Avenue Arts, arms spread wide and face upturned into an imagined night wind, I felt the tiny shiver that always came with those moments in my younger life: ballooning lungs and tingly skin that meant excitement, however ordinary, was coming.

“Freedom takers,” is how our unnamed narrator in Allison Gregory’s one-woman play Wild Horses describes the trio of 13-year-old girls, herself and two friends, during the formative summer that comprises our story.

Like a life, Wild Horses is a complete picture made up of countless smaller moments, capsules complete but insignificant, like a photo mosaic. Our narrator, The Woman, soon becomes the Girl, and we’re thrust back into a summer in the 1970s, navigating evil siblings, preferred siblings, overwhelming crushes, formative sexual experiences, the jaw-dropping realization of your parents’ fallible humanity. The eternal pretending of being 13.

This story feels rubbed smooth and simplistic over years of our narrator’s remembering: She is the good but corruptible friend, Zabby the tough one and Skinny Lynny the innocent, accident-prone one. Together, they push each other toward bravery, trying things as a group that they never would alone. Egging cars, lying about knowing how to drive, sneaking out of their houses, drinking cocktails made of everything in the liquor cabinet including the peppermint schnapps. And, driven to the brink by a disintegrating home life, trying to free a team of neglected horses from a nearby ranch.

Woods’ performance is captivating, her easy physicality drawing you into her storytelling web first as her adult self, holding court in the dingy bar where the Woman tells us her story. Later, as the Girl, her shoulders tighten and we see the uncertainty she’s trying to hide, her voice flipping from character to character with clarity but subtlety.

Beyond her exceptional performance, however, there’s very little reason for Wild Horses to be a play. The beautiful writing seems more like a short story or memoir translated unevenly into spoken dialogue. The moments when the Girl or the Woman addresses the audience are descriptive in a way that makes vivid sense as prose but raises eyebrows as dialogue, to the extent that even a talent like Woods can’t always pull it off naturally: “I snake my searching legs through the dark. Around the rope. Clutching the knots like stolen gems,” our narrator says, describing a breakout from her childhood bedroom.

That’s not writing a 13-year-old girl, that’s writing a story about a 13-year-old girl. The omniscient narrator is hard to pull off in theatre outside of direct literary adaptations, and while heightened language is a marvelous thing, inconsistently heightened language is more confusing than anything else. With the exception of an intro and outro as the Woman, our narrator relays the story as from her role as a first-person participant, the Girl, slipping as needed into the other characters in the Girl’s story. In moments of pure narration, her perspective is unclear.

Given the sparseness of the story and the design (Intiman AD Jennifer Zeyl handled the appropriately minimal set and costumes), Daniels’ impulse toward stage business that mirrors the text is understandable, though elements that feel subtle in novels can feel heavy-handed on stage when they’re coming at you as narrative, linguistic, visual and aural elements all at once. When “Wild Horses” by the Rolling Stones played in the show’s final moments, I was crestfallen, because while Woods’ performance is worth the price of admission, it’s always disappointing when a play doesn’t trust its audience to put the pieces together on its own.