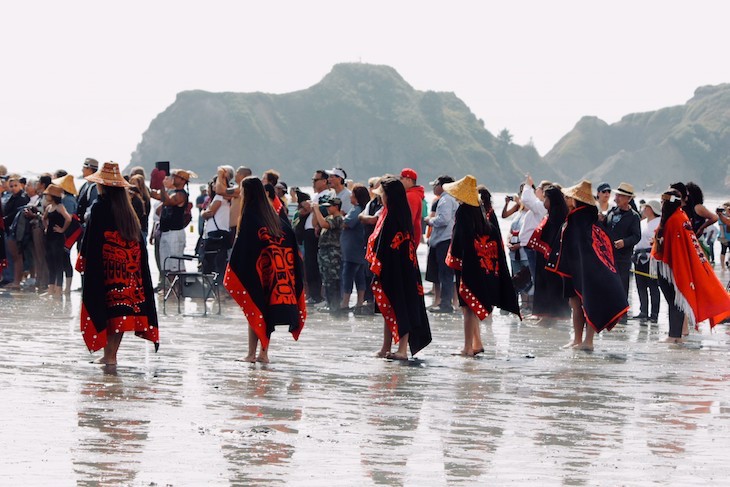 On my first Christmas in the United States I received, along with a stocking, a couple of books. They were, as I inferred by their Pacific Northwest and U.S. themes, meant to help me learn more about this region and country.

One was a book of photographs by Edward S. Curtis (1868–1952). It was the usual hackneyed hagiography of Curtis-the-dauntless-adventurer, nature lover and “pioneering” photographer who dedicated three decades of his life to his North American Indian project, capturing the cultures of Indigenous people in 5,000 pages of text and more than 40,000 images.

Back then, I’d only vaguely heard of Curtis, though I recognized the sepia-toned, ethnographic lens of colonial photography. This I remember. I don’t recall the book mentioning how Curtis, a white man imbued with Social Darwinism, framed and caught his subjects in a perpetual one-dimensional past, and even forced masks and regalia of other tribes on people to make sure everything agreed with his idea of “noble savages” stuck in time. I’m sure it didn’t discuss how his inaccurate portrayals of Native Americans still do damage today.

On the occasion of the 150th anniversary of Curtis’ birth, a vast and at times splendid show at the Seattle Art Museum, Double Exposure: Edward S. Curtis, Marianne Nicolson, Tracy Rector, Will Wilson (on view through Sept. 9) grapples with his problematic legacy. Historic photographs, including work not shown for over a century, hang side-by-side with videos, photography and installations by contemporary indigenous artists Marianne Nicolson, Tracy Rector and Will Wilson.

Nicolson (Dzawada’enuxw), a multidisciplinary artist and activist, welcomes visitors to the exhibition with an immersive installation. A 14-foot-tall glass archway called “Ḱanḱagawí (The Seam of Heaven)” emits a scintillating blue light which, reflected and refracted on the floor and the ceiling, fills the hall like ripples of water.

“The title of the piece refers to the Milky Way,” Nicolson explained during the press preview of the show, her face bathing in blue light. “But the literal translation is ‘sown together.’” This, she explained, exemplifies a worldview that unites rather than divides and exploits — the default mode of the colonialist mindset. Case in point: the Columbia River, over which the U.S. and Canada share jurisdiction:

“The Indigenous perspective sees river systems, or even star systems, as a whole. But water systems have been delineated into ownership, privileges and rights to resources. In reality, the Columbia River is one system. I wanted to recreate that visually: the light becomes dynamic again.”

The theme of reaffirming flux and dynamism snakes through the show. “Many indigenous voices have said Curtis tended to isolate,” Nicolson continued. “When he photographed baskets, they were not shown as they were used, but as aestheticized objects. He applied the same consideration to Indigenous people. We were objectified rather than shown as dynamic. In my work, I’m reasserting that dynamism, a wholeness. The metaphor of sowing refers to something that is brought together again.”

During the press preview, filmmaker, curator and community organizer Tracy Rector (Seminole/Choctaw), who showcases five short films at SAM, also referenced the idea of wholeness: “As Indigenous people, many of us don’t see ourselves separate from nature,” she said.

On a wide screen behind her, rowers glided through the water effortlessly. On the opposite screen, Suquamish tribal member Lydia Sigo, dove for geoduck. In a voice-over, she said she feared for the health of the Puget Sound and with it, the future of her profession.

“Perhaps [this connection with nature] is rooted in an understanding of what it means to be intimately connected to the seasons, cycles and elements,” Rector elaborated in a recent email. “I wanted to highlight the beauty of our region and her gifts with these films. A portrait of the land, waters and animals.”

Rector, who is executive director and co-founder of Indigenous film organization Longhouse Media, sees her filmmaking process as collaborative. Art, she says, is a way of connecting: “It’s important and much more interesting to work with others. To hear their thoughts. To incorporate their ideas. To honor their culture in a way that is meaningful for them. I firmly believe that filmmaking is a team effort where credit can be shared.”

Creating a tintype, a 150-year-old technique of photographing directly on a thin metal plate, takes about 30 minutes. The process lends itself to slowing down, Wilson said. “It encourages us also to think about what it means to have your portrait taken.”

Wilson denies ownership of the photo by giving the original tintype to the sitter—he only keeps a digital copy. “There’s a conceit in archival tendencies,” he said. “An idea that you can ‘own’ and have power over what you collect. Hopefully, we can rethink those historical dynamics.”

At SAM, the digital prints are sprinkled throughout the exhibition, culminating in one glorious room full of larger-than-life portraits hung side-by-side. On one wall, a portrait of Storme Webber hangs amid a salon-style hanging of stagnant Curtis prints.

Wilson’s portraits, by contrast, come to life in video clips on our smartphone with the help of the Augmented Reality app Layar. When you scan the portrait of Swil Kanim, violinist and citizen of the Lummi Nation, his violin suddenly starts moving in performance on the screen. Webber performs a spoken word piece.

“Navajo is an orally ‘fixed’ language and became a written language only relatively recently,” Wilson said. “With the Layar app I can bring back the orality and performative nature of our culture. I can activate my photographs and have people tell their own stories.”

Still, Wilson’s left with an ambivalent feeling about showing and working in response to Curtis. “Museums are finally figuring out how to incorporate contemporary Indigenous voices,” he said. “But they still want to show Curtis.”

This ambivalence imbues the show. With more than 150 photogravures, platinum prints, silver gelatin prints, orotone (goldtypes) plus field recordings and a film, it is heavily tilted toward the man and his work, if only by the numbers. How can you possibly make up for a legacy that keeps persisting as long as countless new books, gifted for Christmas or not, and other exhibitions keep feeding us these images?

Leaving an exhibition filled with so many immersive, moving images, a sense lingered that perhaps Curtis himself is the relic of the past best left there. As Asia Tail (Cherokee), an artist, curator, arts administrator and member of SAM’s Special Native Advisory Committee for Double Exposure, wrote on the show’s website: “I hope that in another 100 years his pictures will be a distant memory, replaced by new visions of Indigenous identity created within our own communities.”