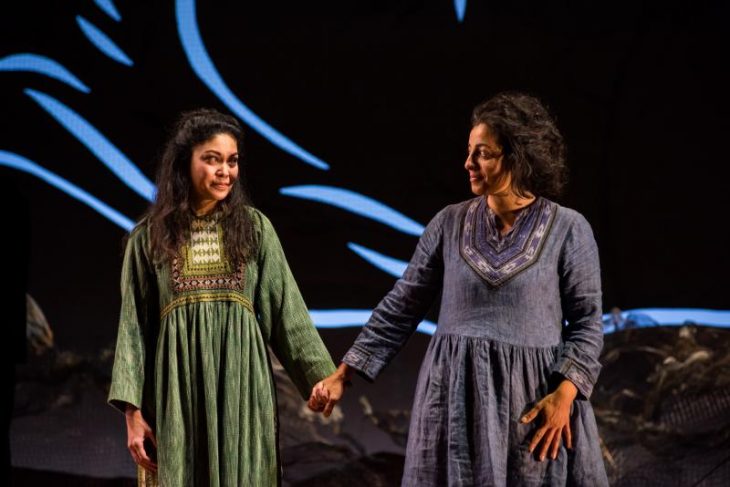 When horrific weather at the 2018 Boston Marathon drove significantly higher numbers of men than women to drop out of the race without finishing, marathoner and New York Times columnist Lindsay Crouse wanted to know why. Her resulting op-ed, “Why Men Quit and Women Don’t,” examines an amorphous but long-extant idea—that women just have higher pain thresholds, an inborn power to withstand abuse that maybe has something to do with childbirth?—to find out what the statistics really suggest: Endurance is a choice. And women tend to make thaht choice, for the sake of others as much as for themselves, and they expect to lean and be leaned on.

The sensorial feast of A Thousand Splendid Suns, now running at Seattle Rep, is a feat about endurance, but not of it. Adapted from Khaled Hosseini’s 2007 novel by playwright Ursula Rami Sarma and directed by Carey Perloff (longtime and recently departed artistic director of ACT in San Francisco), the production is a painterly, poetic distillation, elegantly tracing the lives of several generations of Afghani women.

Beginning in the violence and chaos of Kabul after Soviet control, Suns follows Laila (Rinabeth Apostol) and Mariam (Denmo Ibrahim) as they navigate an increasingly oppressive society where the Taliban is taking control. Through twists of fate and narrowing of options, they both end up married to an abusive man, Rasheed, played with infuriating, reasoned malevolence by Haysam Kadri. By engaging your subconscious through sound and color, Suns does in seconds what a novel takes pages to do, flashing back in time to scenes from their very different childhoods, relocating us instantly in time, space, temperament. David Coulter’s soundscape, performed live just off stage, provides a perfectly spare, film-like score, and an ornamentally perforated backdrop allows for vibrant changes in color, without being overwhelming or leaping into neon unreality.

Through births and deaths, hunger and fear, hope and betrayal, Laila and Mariam endure their oppression in different ways. At first, they’re each more archetype than real person—Laila the beautiful, treasured daughter of intellectuals; Mariam an illegitimate, impoverished child turned resigned, miserable wife. But as they react and redirect, the intricacies of each woman’s inner life reveal themselves—watching them, I began to wonder, how recently was it that women were even allowed to publicly have a “self?” There are certainly soap opera-y elements to the story, along with Villains and Heroes, but it never drifts too far into tragedy, comedy or melodrama. It’s just life—it’s funny, it’s horrible, the good and bad heightening one another like so much emotional MSG.

Ultimately, the play does what beautiful art can do: It makes an intellectually overwhelming idea unavoidably personal. Hearing, in the abstract, about the suffering of women in oppressive patriarchal societies can only get so far into your psyche. “That’s just awful,” you think, “This is 2018, how can that still be allowed?” before moving on to the next online horror.

But when we’re with Laila and Mariam, watching the constrained fullness of their lives, lived in a once-vibrant city amid a once-free populace, their hope and joy become our hope and joy, their indignance and rage our indignance and rage. Not just at the plight of women, but at all the manmade cruelty in the world, which is a dangerous and unpredictable enough place all on its own. But among the homes lost and dreams deferred, there are babies born, books read, games played. Trite but true, and sometimes seeing the beautiful weeds of life coming up through the cracks of a world that would crush them—that matters.