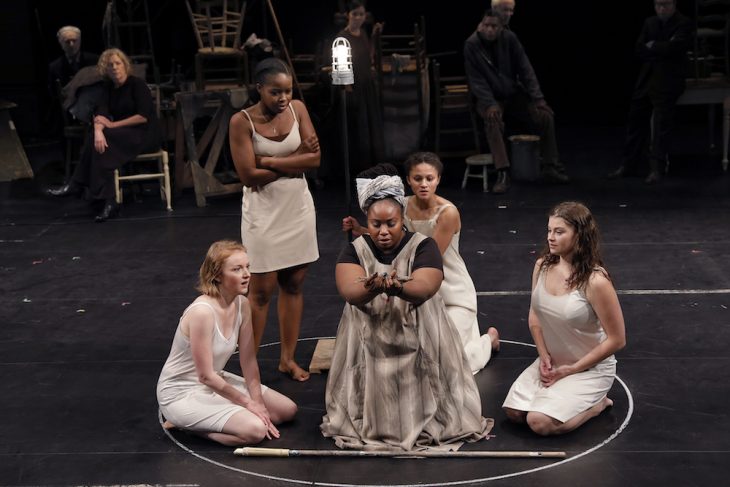 The Crucible is a great play. I mean, it’s incredible, managing to be both finely drawn and massively scaled, like a Mount Rushmore of human behavior, as personal yet universal as a great love song, both specific to its time and free from it. I’m laying it on thick, but only to set up the odd disappointment that is ACT’s current production of Arthur Miller’s 1953 play.

At first blush, it looks cool and spare—Matthew Smucker’s brilliant scenic design and Deb Trout’s costumes are both spot-on combinations of literal and abstract. That unsettling ethos extends to the opening scene, four young women in white slips laugh as they dance around a woman kneeling and chanting within a chalk circle. The girls move more and more wildly as percussion beats faster and faster. It’s eerie, ferocious, unspecific and compelling.

But that spare abstraction doesn’t bear out into a cohesive point of view, nor does the talent of the cast make a successful show a foregone conclusion. Though buoyed by some excellent performances, this Crucible, directed by John Langs, is an inconsistent, moralizing mess, constantly ignoring its own internal logic, choosing style over theatrical substance and yelling over nuanced emotion. And while a pared-back aesthetic is certainly in vogue in theatre right now, this version seems redolent of current big-deal Belgian director Ivo van Hove.

As most everyone who read this play in high school knows, Miller wrote The Crucible—set during the 1692 Salem witch trials in which 19 people were hanged—as an allegory for the rising terror and mass hysteria of McCarthyism. But The Crucible isn’t perennially relevant because our country is prone to mob rule, it’s perennially relevant because the play transcends its given circumstances, reaching instead into the human psychology of groupthink and our ability to twist acts of self-serving cruelty into moral righteousness. Love, lust, runaway religion, the veneration of female purity, the strain of infidelity, the dynamics between those clinging to power and those grasping for it. Let this story play out, and it has all this and more.

After being discovered at their dancing, one of the young girls, Betty Parris (Emilie Hanson) lies in her bed, unwaking, despite the efforts of her father Rev. Samuel Parris (MJ Sieber). Rumors of witchcraft fly through the town and suddenly the girls, led by Parris’s charismatic niece Abigail Williams (Sylvie Davidson) find themselves at the center of a literal witch hunt, with the power to accuse, indict and sway the opinion of the ever-expanding court. Add to that John Proctor (played with an appealing, hangdog ordinariness by Paul Morgan Stetler), the farmer with whom Abigail was once involved, and a voice of reason in the rising hysteria. “Is the accuser always holy now?” he asks. “Were they born this morning as clean as God’s fingers?”

Current events being what they are, I’m not super into a production that showcases teenage girls as destructive, hysterical liars, but here we are, and it’s to Miller’s credit that you can understand why they behave the way they do. Most of these girls had nothing. Abigail especially, parentless and powerless, finds a modicum of self-governance in her ability to control the court proceedings. “And God gave me strength to call them liars and God made men listen to me,” Abigail says, furious at the hypocrisy of her “upright” neighbors.

Davidson’s flirtatious, cunning Abigail is captivating in her single-mindedness; you can see why the other girls follow her lead, and why her one defector Mary Warren (the gripping Claudine Mboligikpelani Nako) quickly returns to the fold.

Kurt Beattie brings an infuriating (but delicious) smugness to the unwavering Deputy Governor Danforth, called in to dispense justice. Shermona Mitchell is quietly powerful as Tituba, Marianne Owen heartwarming as Rebecca Nurse, Anne Allgood distressing as the self-righteous Mrs. Putnam, desperate for a supernatural explanation for her life’s suffering. Indeed, some of the acting is very good. But sadly, some is not very good at all, which can partially be chalked up to an overwrought vision, a problem that can manifest in flat performances from generally solid actors.

The modern(ish?) staging forgives actors’ modern mannerisms, and a play this good can certainly exist in a nebulous, time-free world to powerful effect. But that choice needs to be consistent and made for a reason. Why the Senate hearing-inspired microphones and crappy webcams used during the court proceedings? Why the chalk writing of the accused’s names on the theatre’s exposed back wall—and why are the characters only sometimes aware of them? A chair, melodramatically dropped from the ceiling. A length of girder, hung over the stage throughout, used for maybe 15 seconds to unnecessarily literally chain John Proctor. Why?

I’m sure there’s a reason that each of these individual choices is meaningful, but they don’t make any collective sense—as a whole, what do they do for the production, how do they help tell the story, or make it unique? Do they enrich your experience and understanding as an audience member? What is part of this story and what is pasted on top? The lessons of The Crucible are nothing new, and working overtime to make a 2017 audience “get it” will only get you in trouble.

The Crucible runs through Nov. 12