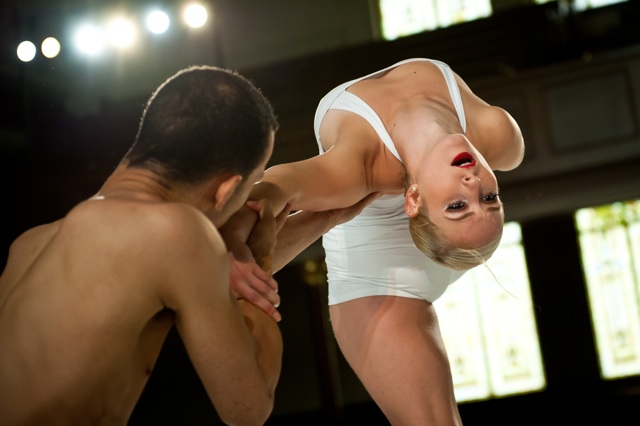 From the moment that Vincent Michael Lopez steps onto the minimal stage at the beginning of LOVE, his body unfolds into a physical manifestation of beauty. Fluid, graceful and strong, Lopez serves as an anchor for the show, both for his physical presence on stage as one of the work’s central duos, and for his masterful dancing. LOVE, the latest work choreographed by Donald Byrd and performed by Spectrum Dance Theater at Daniels Recital Hall, is the culminating work of the 2011–2012 season, and is certainly Byrd’s crown jewel of the past few years.

Even at its most abstract and visually impressive, the choreography has intention. When female dancers enter the stage clad in white tutus, their male cohorts walk around kissing each one, tangling with them on the floor, then moving on to the next woman—a bright smear of red lipstick left on his face. Giselle-like, the women create a poignant and fragile image of the ghosts of love lost. Byrd also embraced the dancers’ limber athleticism, especially during a section when Jade Solomon Curtis is tossed, supported, lifted up and passed between the men in the company—perhaps a comment on male-controlled society or relationships, but impressive and beautiful all the same.

Byrd uses a constant mix of people on stage—solos, duets, corps, and quartets, but the strongest choreography (or perhaps strongest performance) is in the solos and duets. Lopez was the unequivocal standout in this work. His technique was impeccable—beautifully balletic pointed toes, steady side arabesques past his ears, turned out limbs—and his stage presence was mesmerizing. His gaze was always slightly off in the distance, giving him an ephemeral look to match the balanced strength and restraint of his limbs. A duet between Ty Alexander Cheng and Shadou Mintrone was charged with energy, full of lunges and sections with him dragging her around the stage, but ends with gentle tenderness—the two hold hands and walk across the stage; he puts his hand on the small of her back, gently guiding her. The two are a great match—both very strong dancers, equally adept at executing difficult choreography, with neither of them overpowering the other.

One unique aspect to this performance was the unabashed use of facial expression. In most shows the dancers keep their faces stoic, or adopt the extra-wide stage grin. In LOVE the dancers were so fully connected to their parts, so engaged, that they displayed the full emotional range of their experience with facial expression. Rage, despair, insanity, lust, tenderness, calm—as they frowned, smiled, squinted and sighed the performers seemed that much more personally involved in their parts because the emoting never appeared cheesy or forced. It was as if Byrd told them to go out and dance and allow their expressions to develop as a result of personal experience or reaction to the movement. It was powerful.

Set to Benjamin Britten’s three cello suites, played by cellist Denise Djokic, LOVE is a masterful combination of music and dance artistry. Every dancer in the company was spellbinding—full of elegance and technique and deep emotional response. Lopez’s performance is some of the best contemporary dancing Seattle has seen all season, and Byrd’s choreography lives up to his legend.