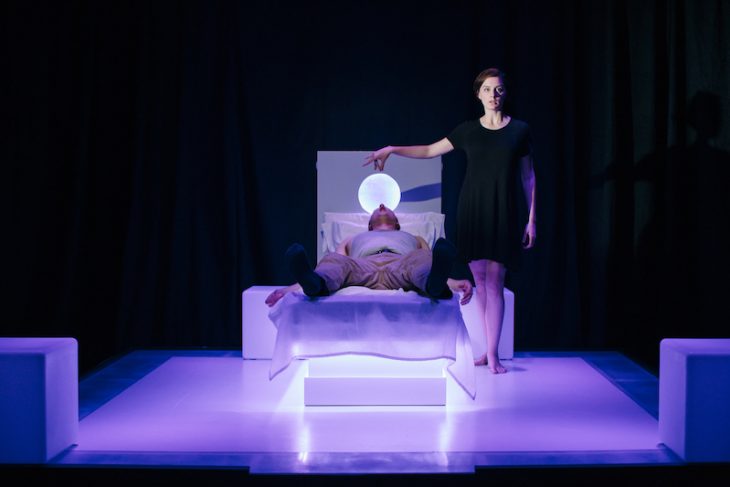 Out in the nothingness of space, strange things happen.

This is what we’re used to in sci-fi, whether it’s the existential threat of an old lover’s apparent presence in Solaris or the very real physical threat of a vicious beast in Alien. Things are tranquil until they’re not.

On stage, the possibilities aren’t as endless, but disquiet suffuses Claire Kiechel’s Pilgrims, a portentous, 90-minute one-act. Forward Flux previously workshopped Pilgrims, which was on the 2016 Kilroys’ List, and now presents its West Coast premiere at West of Lenin in a sleek production directed by Emily Penick.

Earth isn’t doing so hot, so colonists have found an alternative, boarding giant cruisers destined for a far-off planet where preparations for a new home for humanity are underway. In one room of one of these ships, everyone has a secret. Well, at least the two humans: a soldier on a return trip to the planet (Chris Shea) and a 16-year-old girl sent away by her father (Meghan Dobley). Their robot room steward (Alaji Marie) seems to have hidden intentions, too. She’s a vintage model, signified by the stilted cadence of an automated phone line that accompanies her human-like appearance.

Pilgrims head-fakes a lot in the interest of keeping the audience off-balance, with wordless interludes that promise a brand of menace that’s mostly absent from the main events of the play. The nameless humans are pretty opaque too, doling out only selective bits of backstory with questionable veracity.

What isn’t in question: Shea’s soldier is pissed that his single room has apparently become a double with the last-minute arrival of Dobley’s girl, who promptly puts the room in disarray and commandeers the comically narrow bed. He seems genetically incapable of processing her flirty behavior as anything other than an irritant, and the pressure cooker turns to high with news that the whole ship is under quarantine and they can’t leave the room.

As days pass, then weeks, the two adjust to each other. The whiskey helps. The role-playing games the girl is fond of—detective and femme fatale, ghost-pirate ship captives—probably don’t, given the awkward sexual fumbling they lead to.

Shea’s weary reluctance and Dobley’s bouncy enthusiasm are effective, if a little one-note. The same is true of Kiechel’s scenes, vignettes of discomfort that see two people grasping clumsily to define their relationship to each other and the new world they’ll soon be a part of.

The deliberately spare nature of Kiechel’s world-building ups the intrigue but doesn’t give a lot of backbone to the play’s stakes. The soldier’s eventual openness about his first trip to the planet raises interesting ideas about the soul-killing effect of colonization on the colonizer, but they’re far from thoroughly realized. The girl isn’t quite as underwritten as the robot, but it’s close.

Forward Flux offers an attractive package for the play, with distinctly un-homey scenic design by Penick that emphasizes the characters’ uneasiness, and lighting design by Lily McLeod that switches from sterile to moody in a snap. Ryan Scott’s sound design amplifies the ultramodern ambience, though it’s a bit overwrought. Every drawer closing gets an airlock whoosh, and there’s a diarrhea scene that briefly vaults this otherwise coolly appointed future-thriller directly into gross-out comedy.

Pilgrims runs through May 19 at West of Lenin.