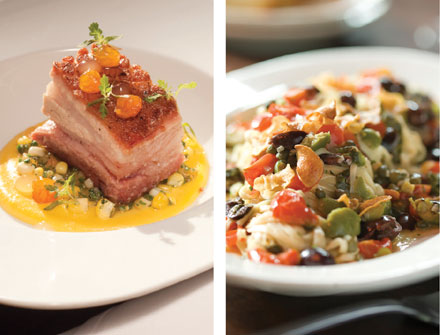 This month’s battle goes down in Belltown between Branzino chef and Top Chef: Las Vegas contestant Ashley Merriman and Spur’s Dana Tough and Brian McCracken, who are garnering rave reviews in local and national publications for their gastropub. All involved are protégés of Maria Hines, the most recent recipient of the highly coveted James Beard Award for Best Chef in the Northwest.

Song on This Month’s Menu: “Fruit Nut” by XTC
A dorky ditty that borders on novelty, this is a faux-orchestral effort from the album Apple Venus Volume 1, which celebrates fruit and flora throughout its tracks. The Spur chefs call the song nutty, while Branzino’s says its sound and lyrics are self-indulgent. But which interpretation tastes better

(from left) Photo by Keith Cottrill; photo by Rina Jordan.

Tough and McCracken tried to capture the nuttiness of this month’s song on two levels: using foods — not necessarily nuts — with a nutty taste, and making dishes “nutty” in texture and flavor combinations. The duo combined fruit and protein with this pork belly. With the fat left on (it’s blasphemy to trim it off), the belly was beautifully braised and paired with globe peaches. I especially like the plating on a bed of creamy corn pudding that’s kissed with a touch of brown butter, which, yes, is nutty.

Merriman’s simply named “Spaghetti” dish intrigues me. I applaud her self-described “liberal interpretation of fruit,” which allowed her to dress her homemade pasta with tomatoes, capers and olives. It’s a sensual dish, with perfectly crisped garlic chips spicing up the brininess and, indeed, the fruitiness of the sauce. As Merriman says, this is a broken-down spaghetti alla puttanesca. “Puttanesca” means “of a whore,” and, fittingly, I find myself devouring this simply delectable dish without my typical restraint.

Dish-Off reviews are based on announced visits. Restaurants get guidelines and choose what to serve according to the month’s theme