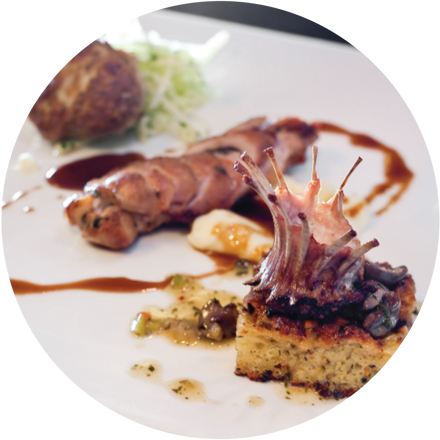 This month’s Dish-Off features Urbane, a glistening restaurant in the new Hyatt at Olive 8 hotel, and Volunteer Park Café, a neighborhood meeting place in a building that’s more than one hundred years old. Moreover, it’s a chef’s battle of the sexes, as Urbane’s Savuthy “T” Dye and VPC’s Ericka Burke must each create one dish interpreting Peter Gabriel’s “Blood of Eden,” a song chosen for this month’s competition by City Arts’ Best Chef of 2009, Kerry Sear. Sear noted the song’s gorgeous melody, though its melancholy message, like much of the 1992 album Us on which it is found, seems to reflect Gabriel’s failed relationship and divorce. “I’ll be interested to see how chefs interpret the gender messages,” he told City Arts.

For her dish, Burke looked deep into the song and interpreted it as “the struggle for unity,” she says, “a battle to reach one another in the face of the natural ebb and flow in any relationship.” I sense this struggle in her seafood presentation. “Men are hot and women are cold,” Burke asserts. She captures this idea with two separate and seemingly distant components on the plate: the pan-seared halibut and Louisiana prawns with saffron béarnaise are male, while the chilled white anchovies with lentil salad, Kushi oysters and tobiko are female. But on closer look, “unions” of twos are evident; the prawns are intertwined, as are the anchovies, which frame and support the lentil salad and the pair of oysters. Furthermore, the hot and cold components complement each other well, giving me hope for unity while also being thoroughly delicious.

“I did a rather straightforward, literal interpretation of the song,” T explains, playing on “blood” and “Eden.” He really wanted to prepare snake for the Eden theme, but instead chose rabbit because of its prevalence in gardens and free-spirit nature. A delightful rabbit crépinette sits on a salad of apple and quince — both believed by different camps to be the forbidden fruit of Eden. Next to that is rabbit loin with luscious potato puree, surrounded by a rich rabbit reduction sauce of liver and blood, in tribute to the theme. Finally, reflecting T’s free spirit, there’s a crown rack of rabbit (as always, the meat closest to the bone is well worth the fuss) atop offal bread pudding, with scattered rabbit kidneys and hearts. It’s my favorite part of the plate — my “moment of bliss,” as Gabriel sings.

Dish-Off reviews are based on announced visits. Restaurants receive guidelines and choose what to serve according to the month’s song.