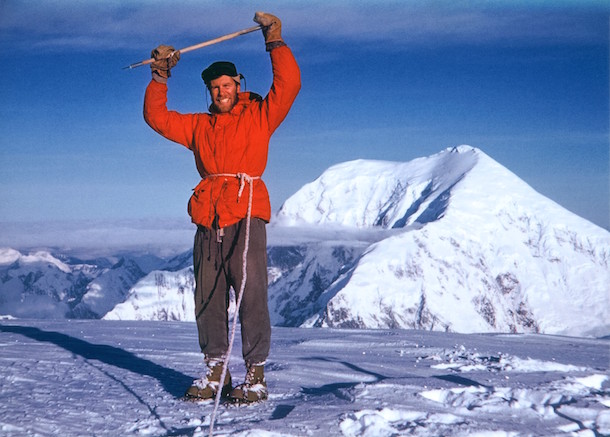 Filmmaker Dave O’Leske surely realized he’d struck documentarian’s gold a decade ago when he began tailing veteran mountaineer Fred Beckey. Now 94 years old, the subject of O’Leske’s entertaining documentary Dirtbag: The Legend of Fred Beckey may not be a household name, but he’s a living legend in the climbing community and a character so fascinating you’d swear a Hollywood screenwriter invented him.

Beckey’s undimmed obsession with climbing is as mythic as his accomplishments within the sport. The climbing bug first bit him in the late 1930s, when he and his younger brother Helmy began scaling peaks in Washington State’s North Cascades as teenagers. In 1942, the brothers pulled off an unprecedented second ascent of British Columbia’s Mount Waddington, known at the time as the most notoriously difficult climb in North America.

The Waddington climb was enough to gain the Beckey siblings international renown. But soon after, Helmy sustained a severe knee injury during another ascent, forcing him to retire from climbing outright. Fred, for his part, continued climbing and never looked back, amassing a staggering number of first ascents on peaks across the globe and writing 13 guidebooks that’ve become biblical chapter and verse for mountaineers the world over.

Those accomplishments by themselves are enough to fuel an interesting documentary, and that’s not even factoring in Fred Beckey’s utterly singular style and personality. In an era when climbers often dressed formally and treated the sport as a structured team effort, Beckey was an unapologetic maverick who often dressed like a vagrant, drove cross-country to expedition sites in a Pink Thunderbird throughout the 1950s and ascended mountains practicing an Alpine style of climbing entailing ascents at lightning speed, taken on without the aid of oxygen at high altitudes.

A good deal of Dirtbag offers glimpses of the man in vintage archival footage and photos, climbing up sheer cliffs with insane nimbleness and posing happily in front of jaw-dropping vistas. Beckey is poetry in motion in those grainy images—quirkily handsome (Sam Rockwell would be a shoo-in playing him in a narrative feature), incredibly driven and palpably charismatic.

Not surprisingly, that combination drew a succession of girlfriends—according to one fellow climber, he “burned through women like a gypsy went through horses”—but mountaineering was, and remains, the only constant in his life. Beckey’s single-mindedness rendered him the textbook definition of a dirtbag, a climber so committed to the sport that he pursues it to the exclusion of employment, relationships and conventional society.

That uncompromising disposition cost him a spot on the Mount Everest ascent that provided the springboard for fellow Northwest climber Jim Whitaker to become a superstar of the sport (and eventually the CEO of REI). It also left personal repercussions: Fred’s kid brother Helmy went on to become an established opera singer, but without the common connection of mountaineering the siblings drifted apart. And there’s an enlightening interview with “the one that got away,” Fred’s still-vibrant ex-girlfriend Vasiliki Dwyer.

Beckey’s inscrutability lead one colleague to dub him “the Bob Dylan of climbing” and his sustained commitment to the dirtbag lifestyle invites comparison to the punk-rock ethos. “He never sold out,” another friend and fellow climber enthuses in the film.

That last statement carries with it a wealth of complexity, and O’Leske’s readiness to face that ambiguity head-on gives this funny, gloriously spun yarn unexpected depth and weight. Make no mistake, Dirtbag beautifully captures the romance inherent in Fred Beckey’s lifelong passion. It finds affectionate, oddball humor in latter-day Beckey’s cantankerous eccentricity. But it also illustrates with bracing clarity the thin line between following your dreams and being consumed by them.

Dirtbag premieres in Seattle on Sunday, June 4 at the Egyptian (which is sold out) and plays again June 10 at SIFF Cinema Uptown.