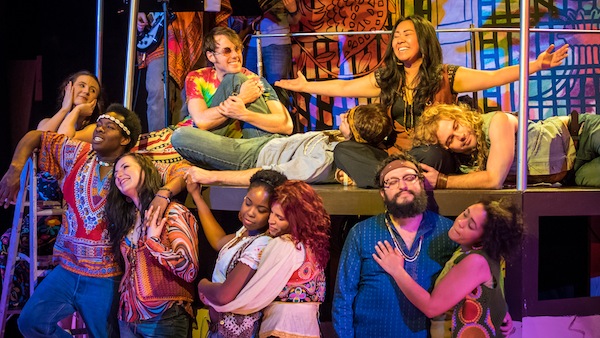 Hair, the “American Tribal Love-Rock Musical Smash,” opened off-Broadway in 1967 at Joseph Papp’s Public Theater. It moved to Broadway in 1968, where it ran 1750 performances and became a lens through which the squares, the stuffed shirts, the “Establishment,” and the just plain old perplexed and/or curious viewed the burgeoning counterculture. With its frank language, surreal humor, paeans to drugs and sex, and its then-infamous nude scene near the end of Act One, Hair certainly drew brickbats, even condemnations—and not all from the square side. The show, like the 1960s and its children, has sparked discussion and reflection ever since. A new production runs through June 7 at ArtsWest Theatre in West Seattle. Director David Gassner gives us the lowdown. 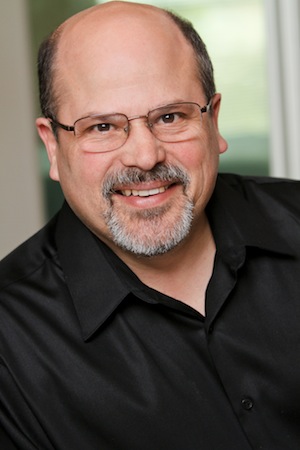 Why Hair, why now, and why here?
I wasn’t involved in the season selection—that was the job of the former artistic director, Christopher Zinovitch and the ArtsWest Board of Directors. But I think Hair is a great show to revive. Even though it was created nearly 50 years ago, its themes resonate today, and the score is one of the great masterpieces of 20th century American musical theater.

Did you make any major changes to the staging of the show or the musical numbers?
The original script calls for Claude to be a member of the tribe from the start of the show. We took a cue from the movie that was made of Hair [by Milos Forman] and made him an outsider, selected by the tribe to follow the path of Aquarius.  We didn’t change any of the musical numbers, but the way some of the early songs are performed changed because of this reorientation of the lead character.

Also, the stage show is intended to take place in the actual theater in which it’s being performed; that is, there is no fictional setting. We moved it to a public space in New York, the grand concourse of Grand Central Station. Our production’s conceit is that the tribe is performing Hair as guerrilla theater, with no schedule and no advance notice, and with a flash mob introducing the first number.

The set is designed so that performers can hide, reappear, and jump off and onto things.  How closely did you work with set designer Burton Yuen on this concept?
We worked very together on the set’s functionality, adding and removing elements as the production’s staging developed. The visual design of the set, however—the mural of Grand Central’s tall windows with a 1960s perspective—is 100% Burton’s design and execution.

The costumes are, of course, amazing.  Did K.D. Schill have to raid every Goodwill in the city limits?
Just about. But K.D. has an enormous costume stock of her own to draw on. We also had help from other theaters; for example, the wig-master at Seattle Repertory Theatre was responsible for Berger and Woof’s wigs.

The show contains “nudity, strong language, mature themes.” Do you expect the show to be controversial?
Nudity on stage was shocking in 1967, but our culture is filled with it today. The greater challenge is to use the nudity in the service of the production’s themes, to arrive at such moments honestly. Hair is widely known for its nude scene, so it shouldn’t come as a shock that we chose to keep it in. But the company is aware of patrons’ sensitivities, and is being upfront about it. This ensures that everyone knows it’s a part of the show and can make an informed decision.

Your cast looks like they were born sometime in the first Clinton administration.  How did you go about explaining the various meanings and reference points of the show to them?  Were any issues especially challenging?
I started by showing them a documentary about the first production of Hair, and then throughout the production process I talked about the events of the time and what people thought about them then. We also talked a lot about the drug culture of the 1960s, which was very different from the culture of today. The writings of Timothy Leary, which greatly influenced the hippie generation and the creation of this show, were a common subject of our own conversation.

They’re an extraordinarily talented group of young performers, all with “triple threat” skills: singing, dancing and acting. We’re incredibly fortunate to have been able to put this cast together. Some have particular strengths, such as a powerful voice, classical dance and/or acting training, or expertise with musical instruments. But their greatest strength is in their collective talent.

Photos: The cast of Hair, photo by Michael Brunk. Below: David Gassner.