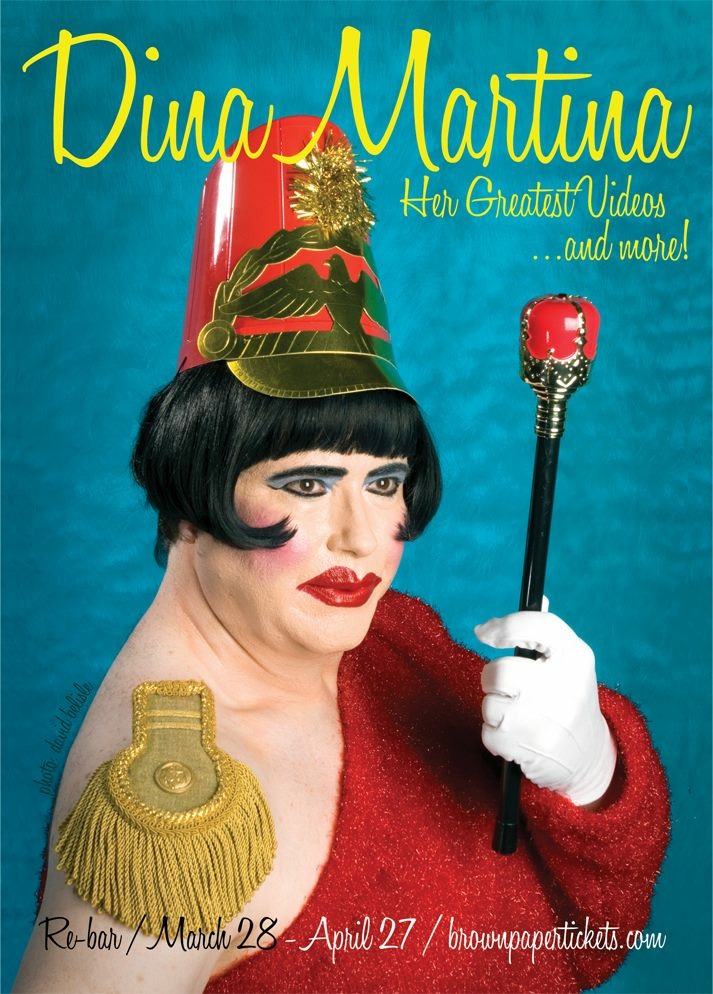 Dina Martina first warbled her way into Seattle’s collective heart in January 1989, as part of a peep show at COCA entitled Pearls Before Swine (curated by Steve Wells, then the owner of Re-bar), when the arts center was located next door to the more conventional peep shows on offer at the Lusty Lady.

It was an auspicious beginning for a performer from whom one can always expect the unexpected. Unusual song juxtapositions (singing “Let It Snow” to the tune of “Let It Be” and vice versa). An interpretative dance to “Music Box Dancer.” A bizarre pattern of speech and pronunciation in which “Seattle” becomes “Seetle,” unique descriptions like “a smidgen of a tidbit” abound, and there are obscure references to “the BLT community.”

She’s also opened for a plethora of personalities over the years, including Nina Hagen, Margaret Cho, and the Village People. “The Indian was mean but the Milkman was nice. But you know what? It was actually a lovely experience—even though they accidentally locked me out of the dressing room.” She’s also graced stages in LA, New York, and London, and has a regular summer season engagement in Provincetown.

Now the distinctively clad, off-kilter singer has concocted a unique evening of entertainment,  Dina Martina: Her Greatest Videos…and more!, which opens Friday, March 28 at Re-bar, spotlighting the filmic gems that have always added spice to a Dina show.

Dina’s first full-length show was presented at Re-bar in October 1993, and it’s been her main Seattle venue ever since. Why Re-bar? “That’s a question I’ve been asking myself for years,” says Dina. “Oh wait a minute, I remember! Arby’s was booked” (as for Seattle itself, Dina notes ” I’ve always loved your moist region, but I really can’t put my finger on it”).

It was also the first Dina show to feature a video, showing her cavorting around Las Vegas to the theme song from Laverne & Shirley (appropriately titled “Making Our Dreams Come True”). “The shoot was very ‘DIY’—Do It Yourself—and yet still very ‘IYF’—In Your Face,” Dina recalls. “I have very fond memories of that shoot because it was before they turned Fremont Street into a covered pedestrian area. You used to be able to just drive your car down the street or, if you didn’t have a car, you could just walk right out into traffic. They also didn’t allow any photography inside the casinos then; keep in mind this was before everyone wanted to trade actual experiences for the 8 megapixel version of them.”

Indeed, the most remarkable sequence, filmed surreptitiously by her cameraman, shows Dina gaily striding through a casino, executing a few dance moves in front of a large slot machine, while a middle aged couple watches impassively. Subsequent shoots were easier; her camera crew didn’t have to avoid security while shooting a commercial in Paris for her signature scent “La Dina” (“The fragrance for women with superfluous hair”). There have also been commercials for a “Dina doll” and a skillful reworking of an ad for Bryman College (check it out on YouTube).

Her Greatest Videos will feature a selection drawn from over 25 films in the archive. “Without giving too much away, I’ll tell you that we’ll be showing many of my commercial endorsements, old and new, as well as music videos, movie trailers and things I’ve never shown before!” It won’t be a typical Dina show, as about two-thirds of the performance will be devoted to videos. But you can expect some live performance as well. With new songs? “Perhaps,” says Dina enigmatically.

The show is set to run through April 27, with performances Friday and Saturday evening; Sunday matinees will feature a specialty cocktail, the Bloody Martina, made with bacon-flavored vodka and garnished with a little smokie. Among the new merchandise available will be the Dina Martina Baby Onesie, created “by popular demand.”

And Dina has some advice for those of you attending her show for the first time: “Live fireworks displays, white carriages under the stars, shivering girls in short skirts and high heels, gravy without lumps and an elevator that only goes down.”