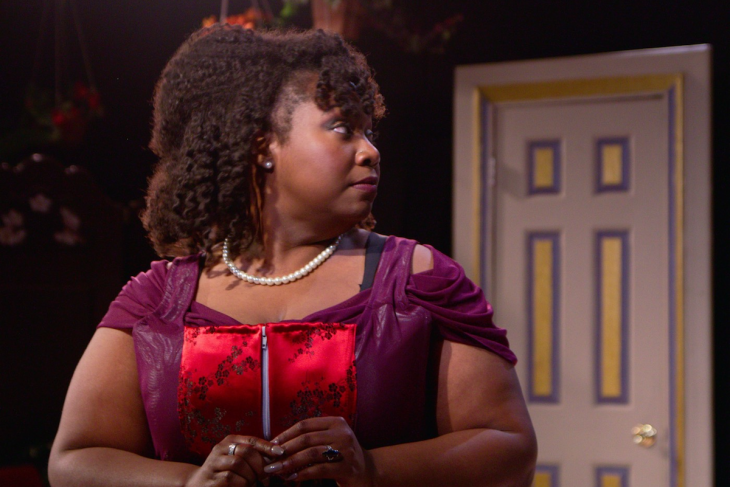 It doesn’t take much to push William Wycherley’s Restoration-era comedy The Country Wife into the realm of satire. A new adaptation by Rachel Atkins on stage at Theater Schmeater makes this clear pretty quickly.

Wycherley, enjoying 17th-century England’s newly permissive attitude toward public bawdiness, rewarded Country Wife audiences with double-entendre galore before an incoming Puritanical streak shunted the work offstage for a couple of centuries. Now his depictions of macho lotharios and foolish women look ludicrously sexist — so ludicrous they need only a nudge here or there to reframe the characters entirely.

So Atkins, working in a broader mode than in her empathetic 2014 play Black Like Us, nudges and tweaks, keeping the play’s essential plot intact, but emphasizing different characteristics. The men are transparently pathetic, obsessed with not being cuckolded or their own sexual prowess. Every interaction is some kind of dick-measuring contest. The women, on the other hand, are perfectly aware of the transactional nature of sex in this environment — and they’re fine with it. It’s not like these guys are scintillating conversationalists.

Theater Schmeater’s production, directed by Elizabeth Wu, drifts in and out of the ping-ponging rhythm the farce requires, with many of the rough moments at a recent performance owed to an actor still completely on-book. (Listed as a character’s swing in the printed program, one wonders why he didn’t have time to learn any lines.)

Fortunately, there are a number of skilled comic actors here who can pick up the slack. Shermona Mitchell stars as Margery Pinchwife, the titular woman deemed too simple by her husband (Laurence Hughes) to spend much time out of the house or in the big fancy city of London she can’t possibly appreciate. His preferred pet name for her is “Baggage,” and that’s one of the nicer things he calls her.

Mitchell’s quiet sense of self-confidence works to deflate Hughes’ already desperate posturing; every attempt to turn her into a punching bag just makes him look weaker.

In the play’s other main plotline, Nicholas Bernard owns the stage as Mr. Horner, a Don Juan in an open silk bathrobe who convinces the town he’s become a eunuch so men won’t feel threatened by him keeping their wives company. The doltish Sir Fidget (Geb Brown) is fooled, and his wife (Alysha Curry) and her companions (Mika Swanson, Katt Akin) reap the benefits. Bernard’s swaggering performance is charming and ridiculous in equal measures.

A third plot strand involves a more straightforward courtship, and its relative lack of absurdities doesn’t play so well in this take, though it does give us the production’s best performance: Nabilah S. Ahmed as Harcourt, who pines for the hand of Pinchwife’s sister (Danela Butler). Ahmed is quickly emerging as one of the city’s top young actors to watch, her polished intuition enhancing everything I’ve seen her in.

Like a lot of reimagined old plays, this staging dabbles in modern/old-fashioned fusion. Mostly traditional costumes are accompanied by a few decidedly anachronistic pieces, and the props range from period-ish to pointlessly present-day. (Why does Fidget have an earpiece? Is he a secret agent?) Bumper music is pro forma high-low eclectic. (Nina Simone and Selena Gomez!) This kind of lazy mash-up approach is a staging trope that’s hopefully worn out its welcome.

Still, Atkins’ brisk and lively adaptation is worthwhile, adding dimension to an established work and reveling in plays on the word “backdoor.” I’m not sure anyone was clamoring for a fresh take on The Country Wife, and perhaps Atkins’ talents would be better served on another new play. But if you’re going to revive a historically notable but artistically and/or morally dubious work, this is the way to go about it. Theater Schmeater is in the midst of an exciting revitalization, and highlighting talented local voices like Atkins is exactly the kind of move that should keep them on that path.

The Country Wife runs through April 14.