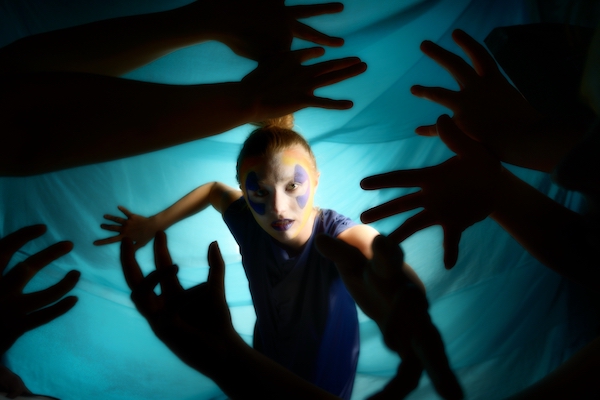 The phrase “devised theatre” can conjure up images of actors delivering florid or nonsense language with much gravitas, executing bizarre movements and choreography. But all “devised” means is we made this together. For multidisciplinary theatre company DangerSwitch, the guiding light is their story and the honest engagement of everyone telling it.

When Eddie DeHais and Alyza DelPan-Monley started conceiving of Into the Deeps, the third full-length show from DangerSwitch, premiering June 8–17 at Theatre off Jackson, they knew they wanted to explore the ocean. DeHais, the company’s founder and artistic director, suspected Into the Deeps wanted heavier choreography than the company’s previous shows, so they enlisted DelPan-Monley, a dancer, choreographer and DangerSwitch company member, to co-direct.

“Our first approach was to make something macabre and whimsical,” says DelPan-Monley. “It’s the ocean, the unknown, there’s the Bermuda Triangle, there’s all these crazy creatures living down there. And then…”

“And then the election happened,” says DeHais, their infectious laugh ricocheting off the walls in the rehearsal room, where pairs of performers are exploring precise movement patterns as we speak. “Exactly,” says DelPan-Monley. “And it evolved into us exploring resource scarcity, the power structures in political systems, the rise and fall of power. Since our work is generative, we make stories based on what, for us as performers, most needs to be told.”

For that reason, callbacks for DangerSwitch function more like a rehearsal than an audition, so performers can figure out their comfort level with the collaborative process. “We’re not looking for who is technically the best; it’s about who is willing to bring 100 percent to the room,” DeHais says. Failure is completely acceptable, even useful, but ego is not. “When an idea comes into our room it belongs to everyone. Nothing is precious. We’ll explode your idea, destroy it and rebuild it, and we need people who are excited about that.”

Early DangerSwitch rehearsals are workshops, where the collaborators devise scene after scene, with no wrong answers. Five days of workshops for Into the Deeps generated some 50 pieces, “small, sloppy, memorable or not,” says DelPan-Monley. In subsequent rehearsals, everyone pitches or brings back ideas that are truly important to them.

All the while, DeHais and DelPan-Monley discuss the larger arc of the show, the macro to the rehearsal room’s micro. “As a group, we’re building a lot of shared vocabulary to pick from, and then we as directors lay a framework and plunge the framework into that ripeness and find what fits,” DelPan-Monley explains.

DeHais, a director and performer, actor and clown, craves creation in communion with all kinds of artists, the sharing of knowledge central to their own artistic growth. They’ve been making devised work since their time at University of Chicago, but recommitted after some unpleasant experiences acting with directors who saw their vision as the only valid opinion in the room. As an actor, sometimes “you’re just a meat stick,” they say, with no agency or voice.

The DangerSwitch rehearsal room is generous, which allows the group to consider how each moment in a story is best told. Through movement? Music? Poetry? Burlesque or shadow puppetry? DangerSwitch’s 10 members come from a wide variety of artistic backgrounds, as do their show-to-show collaborators.

As the Into the Deeps ensemble worked, the story shed its need for human characters, and then for words at all. “Act one is really fun,” DeHais says, “It’s almost all clown. It’s these creatures, and it’s about what happens when you introduce the concept of private property into a group that has no concept of power, property, or even of self.” Act two happens thousands of years later and expands on that idea of what happens when objects become central to a society, when we’ve lost our ability to live within natural systems. “We started this show thinking it was gonna be beautiful with lots of dance; we had no idea that we were gonna make an examination of industry and capitalism,” DeHais says.

In ensemble-generated work, unlike more traditional narrative theatre, no movement is wasted, no moment unconsidered. No one is crossing the stage just to get to the other side. And that’s the key to connecting with devised physical theatre—every word, every repeated gesture, someone fought for that, even if they’re no longer the performer delivering it. What story is it telling you, and how?