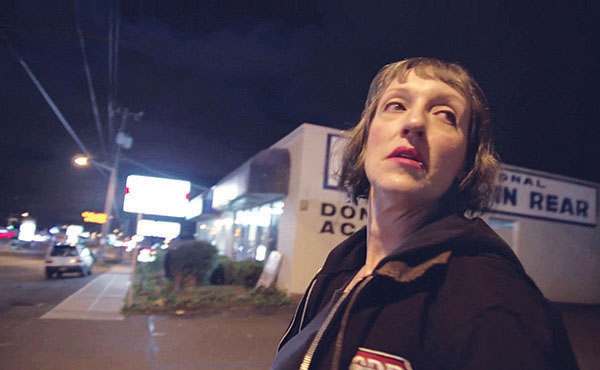 Seven years ago, filmmaker Elisa Haradon became fascinated with the hidden community that dwelled along Aurora Avenue, an underworld of heroin-addicted prostitutes who live and work along Seattle’s most desolate thoroughfare. For the last three years, she’s gathered footage of four women, ages 26-46, for a documentary she’s co-directing with cinematographer Gabriel Miller.

With shooting 90 percent complete, Sweetheart Deal is in the process of editing and raising money. (Seattle producers Peggy Case and Lacey Leavitt are onboard as well as New York executive producer Peggy Rajski.) They aim to complete the film by September and submit it to 2015 festivals. We visited their Ballard studio to discuss the film and watch the current teaser video—seven minutes of film so poignant it triggered tears.

What made you decide to make this movie?
Haradon It took me a long time to find the story. I started shooting with friends and it was very inconsistent. We were getting interesting stuff, but the visual look and the sound were not great. So I put together a trailer in 2011 and showed it as a work in progress at the retreat that the Seattle Documentary Association puts together every year. It got an amazing reaction—and Gabriel was there. I got back home and he contacted me to say he was interested in coming on board.

How would you describe the film?
Miller: It’s a gritty film, almost entirely hand-held.

Haradon: My desire was always to get this vérité style, so most of the film is observational. You’re a fly on the wall and you’re seeing shit go down. It’s a pretty hardcore look at one little microcosm that tells a much broader story. Heroin has become a national epidemic. Every city has an Aurora Avenue.

Haradon: They’re not people you can drive by and dismiss. People see prostitutes and they have all sorts of negative connotations. But what about the reason some people are prostitutes? The reason is because they need to take a shot every eight hours. It’s a full-time job, 24 hours a day. The fear of withdrawal is so strong that they lose their families and everything dear to them. And a lot of these girls came from good homes.

Miller: I feel really lucky to work with these people. All of our subjects are driven to participate in the film. I think they want something worthwhile to come out of an experience that’s often completely devoid of meaning.

Haradon: Not everybody knows how heroin addiction unfolds. It can take like three weeks if you’re shooting up on a regular basis. At first there’s that euphoria, the best feeling you’ve ever had in your life. Then one day you wake up and you feel really, really sick and you don’t know what it is. From then on you’re shooting up just to get back to normal. If you want to get high on top of that, you need more. And as your tolerance grows even more. Some of these women have $300-a day habits. So that means you have to turn more tricks or find another way to come up with cash.

Miller: We’ve definitely seen and captured heartbreaking moments, some brutal, tragic experiences. But we also see wonderful people who have an incredible resilience.