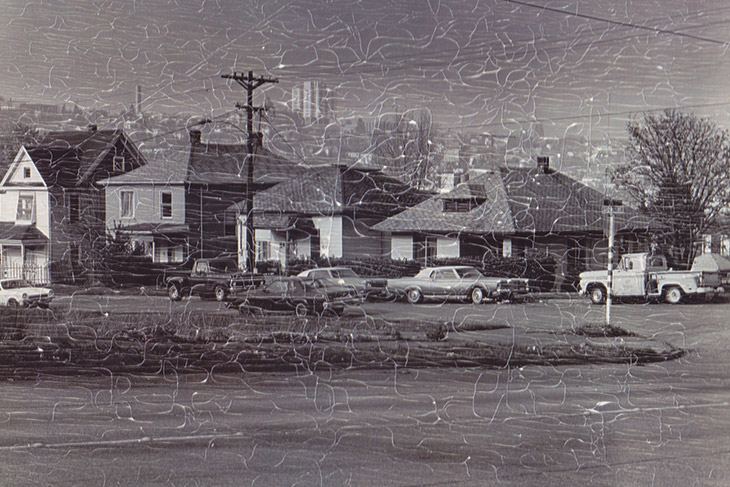 The Hawthorne neighborhood circa 1978, a Black neighborhood that was condemned and demolished for the construction of the Tacoma Dome. This photo was taken by Gwen Jones, owner of Jones Glass, one of the longest-running Black-owned businesses in Tacoma.

The megaquake of Seattle’s housing crisis has come with a landslide of artists and entrepreneurs in search of new territory.

Hilltop continues to set national records for rent hikes as tech bros carve up more Black neighborhoods. Organized white supremacists plaster waves of propaganda posters across city streets. And white arts leaders feel “attacked” by calls for equity. This is Tacoma in 2018. We’re getting hit on all sides.

Are you considering a move to Tacoma? If so, you are on notice.

Tacoma is the unceded lands of the Puyallup Nation. Educate yourself about whose land you’re on and get over your assumed entitlement.

You have to work for your welcome.

Tokenizing your friends of color is not gonna cut it.

Gentrification is a life and death issue. Gentrification is a form of mass displacement that facilitates the reconstruction of ghettoes at the periphery of public infrastructure. It is a pyramid scheme of resource extraction from Black and brown communities that restricts access to education, healthcare, transportation and livable wages. It fractures community networks, disconnecting households from intergenerational supports necessary to meet their most basic needs. Displaced communities are forced beyond city limits into unincorporated precincts where they are overtaxed, overpoliced and underfunded. These disparities crystalize in life-expectancy rates which diverges drastically across zip codes. There is no such thing as “gentrification done right.”

Nothing short of Black, Native and refugee leadership is remarkable. It’s time to divest from Eurocentric cultural institutions including your friends’.

Come correct. Examining yourself is step one. Throw your Facebook friend-requesting, disingenuous email sending, event schmoozing, token outreaching, “I’m not one of those people,” played-out, counterfeit networking tactics in the trash.

Community organizers and folks of color, this includes you. Activists, organizers and nonprofit leaders have escalated displacement by haphazardly transplanting their platforms from Seattle to Tacoma. Through this process, leaders from larger cities garner power through proximity to whiteness while their status becomes predicated on the erasure of historical communities. Organizers and leaders of color are not exempt from accountability. It is our responsibility to model counter-colonial development strategies that center Native communities and uproot anti-blackness. Check yourself.

Get your equity work up to speed. We’re past the season of training. We’re in the era of hiring and firing. (cc: Tacoma’s arts institutions, many of which for decades have refused to reflect our community’s demographics in governance, staff or leadership)

Budget for accountability. Developing anti-sexist and anti-racist businesses is an uphill battle because our economy is fundamentally wired in the opposite direction. This work takes authentic relationships, history, resources, continuous accountability, plus rigorous evaluation and revision. If you can’t put your money and time where your mouth is, don’t lead.

Get over your control issues. Find out who’s doing what you want to be doing and seek ways to support their work. They’re likely to have far more relevant and resourceful models.

Check your peers. The culture of white silence is killing us. Stop leaving the burden of confrontation and accountability on women of color. Get your fragilities in check.

Tacoma is not a backup plan. Tacoma is a community with its own visions, interests, needs, aspirations, histories, strategies and cultural values. If you’re not coming to listen, learn or support, then move somewhere else.

This ain’t our first rodeo. It’s convenient to silence local voices by labeling us parochial, afraid of change, anti-outsider or naive. In reality Tacoma has consistently privileged outside leadership and sold us out through regressive policies. The housing crisis has escalated this problem. (Imagine bidding for Amazon HQ2 in 2017.) We need to consider frameworks like Causa Justa’s Development without Displacement in SF.

Leave your baggage behind. Tacoma folks see a clique-heavy culture of scarcity in Seattle that conditions people to sabotage each other to maintain power and notoriety. Whatever decompression chamber you need to cleanse, detox and rehabilitate from the traumas you have incurred in the 206, do that before you endeavor to move or work in the South Sound.

Black and POC Seattle, get over anti-Tacoma stigma and build with us! Please yall, let go of whatever residual prejudices, misconceptions and sensational attitudes you’ve internalized about Tacoma. While you hesitate to link up, your white neighbors are planting their flags and pushing brown folks out. Come through! Let’s join forces and shift the fate of the region.

Christopher Paul Jordan is an artist, curator and activist born and based in Hilltop, Tacoma.