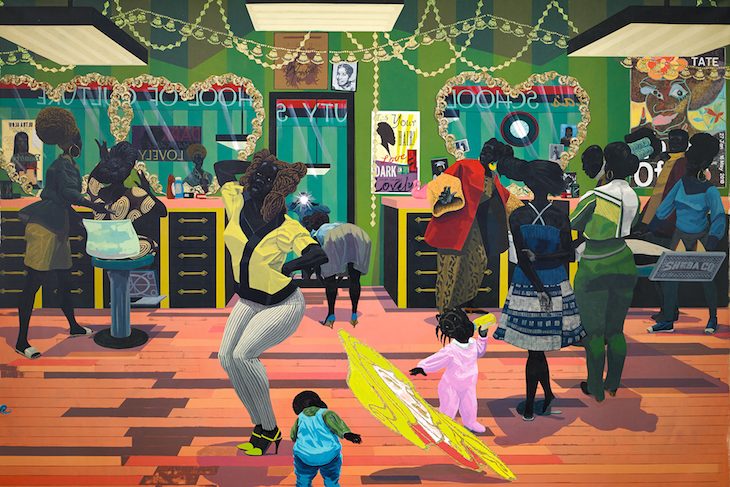 In the National Gallery in London, you might find visitors crouching at the corner of “The Ambassadors,” a 1533 painting by Hans Holbein the Younger. Between two wealthy men’s feet, an odd oblong shape slashes through the canvas. Only when viewed from a specific vantage point or with a mirror held at a certain angle, the flat distortion or anamorphosis reveals itself as a 3D skull.

In the larger-than-life 2012 painting “School of Beauty, School of Culture” by Kerry James Marshall, an anamorphosis interrupts a panorama of a Black hair salon. Here, the warped image of a blonde Sleeping Beauty visualizes how skewed a white perspective and its notions of beauty are. By inserting himself into the image as a photographer capturing the woman proudly posing in the foreground, Marshall asks: Who is telling the story? Who looks at who, and from which vantage point?

These questions form the frame on which Figuring History, a dazzling and monumental show at Seattle Art Museum, is stretched. The exhibition marks the first time the work of three seminal American artists, Robert Colescott (1925–2009), Kerry James Marshall (born 1955) and Mickalene Thomas (born 1971), are shown together. With large-scale paintings and collages referring to the European canon, they recalibrate an art history from which people of color have largely been erased.

In “Le déjeuner sur l’herbe: Les trois femmes noires” (2010), Thomas puts a sparkling spin on Édouard Manet’s famous depiction of two clothed men and a nude woman gazing at the viewer. In Thomas’s version, three Black women look at us. The massive cubist collage of rhinestones, acrylic and enamel on wood dominates the room. In front of it, Thomas installed a living room with books from her personal library.

When she sat down on one of the ottomans echoing the various fabrics in her paintings last week during a press preview ahead of the show’s opening, she described how her muses claim the space: “They have a particular agency, a fearless sense of themselves and how they occupy their space.”

Still, Thomas doesn’t believe society is ready for the Black (female) nude, although she said some industries are changing. “There’s a synergy between the exposure in my work and the conversation around Black bodies, just now on people’s tongues and ears.”

Museums, it seems, are finally taking notice. Although the permanent collections of most large institutions are still heavily tilted towards white men, some museums are working to redress the balance. But the problem is systemic, and it persists. A disproportionate number of museum directors, board members, curators and conservators are white.

“These are not our spaces. Museums are not built by Black people or with Black support,” said Kerry James Marshall, sitting on a wooden bench in the middle of a gallery grouping his five “Memento” and “Souvenir” paintings together for the first time. In the large-scale “invitations to remember,” gold-winged angels tend to interiors filled with artificial flowers, garlands, glitter and vignettes of late Civil Rights heroes.

“When Black people come to see paintings by Black artists with Black people in them, they come to see something they don’t always see,” Marshall continued. “Others come with a sense of curiosity. They look at the work but don’t see it, because they believe you can’t apply a standard art historical analysis to it. That’s not true. I’m making pictures to participate in the critical conversation that’s happened over hundreds of years of art history. Giotto, Da Vinci, Tiepolo—it’s all part of what I’m doing.”

Here, Marshall touched on a particular conundrum: How do we call out the art world’s reluctance to put Black artists on equal footing with the white canon without diminishing their complexity as creators?

I believe it’s by doing both, which is why the formal and conceptual splendor in Figuring History can’t be understated. Colescott’s lines and colors, for example, are as sharp as his take on history and painting. His vigorous rebuttal of history as it is taught and told is most radiantly displayed in “Knowledge of the Past is the Key to the Future: Matthew Henson and the Quest for the North Pole” (1986), a historic counterclaim depicting the first African-American Arctic explorer and “Les Demoiselles d’Alabama: Vestidas” (1985), a brisk riff on the famous Picasso painting and a scathing rebuttal of his “Primitive inspiration.”

Absent from Colescott’s biting wit is the celebratory streak of Marshall’s and Thomas’ works. By employing gold, Marshall puts the gold-leafing of early Renaissance paintings on the same footing as the sparkle of Haitian veve flags that served as inspiration. Thomas employs a similar strategy with her use of rhinestones, which she calls “beautification.” Cheaper than diamonds, their economical value and artifice are as important as their pointillistic qualities.

With a focus on different textures, whether actual or painted, Marshall and Thomas enhance the interior spaces of their paintings. While Thomas asks more ontological questions about artifice and representation, both artists create interior spaces that serve as metaphorical expanse for their subjects to claim and fill on their own terms.

That’s exactly what the rooms in the paintings and galleries of Figuring History feel like. They are filled to the brink with visual sumptuousness. Chambers to remember. Spaces filled with Black joy and Black books. Behind every corner, there’s texture and depth, and dazzling brilliance.

Figuring History is on view until May 13 at Seattle Art Museum.