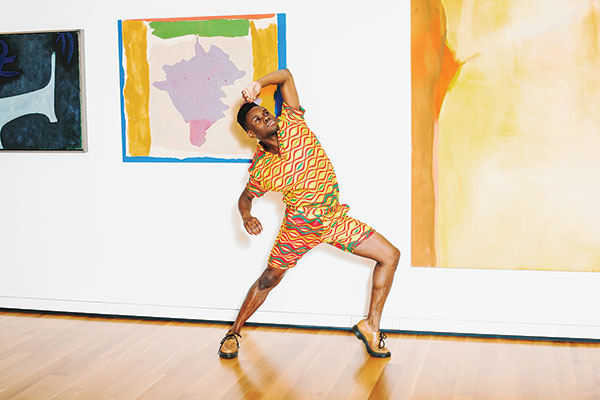 I like to move my body in a very  particular way,” David Rue says. “It’s a reflection of who I am, where I come from, my family.”

Rue, his four older brothers and his parents fled civil war in Liberia when he was two years old. After four years in Brooklyn, they ultimately settled in Minneapolis, among a large Liberian immigrant population. “The beauty of West Africa is one of my biggest sources of inspiration,” he says. “It influences the way that I dress, the way that I dance, the music that I listen to, the way that I speak.”

As a dancer, Rue made his Seattle debut in October in two pieces at the art and technology festival 9e2. The first was a collaboration with screen printer Romson Regarde Bustillo about biology and culture, in which Rue choreographed and performed a commanding solo surrounded by a series of vibrant 10-foot fabric screens, his strong and elegant movement replete with powerful arched extensions and electric body rolls. The second was PYLON II, an hour-long ensemble piece that explored surveillance on a bright white catwalk. Rue is a big believer in cross-disciplinary collaboration and its ability to bring together diverse perspectives and “change what’s possible.”

Rue arrived in Seattle in September 2015 to pursue his MFA in arts leadership at Seattle University. Soon after, he joined the public programs staff at Seattle Art Museum, where he brings in performances and arts activities for exhibition openings, Remix and other events, in conjunction with work on view at the museum. Think hip-hop in front of a Kehinde Wiley painting or a voguing and waacking performance tied to Yves Saint Laurent: The Perfection of Style. “I want to break down this monolithic idea that [a museum] is this ivory tower that’s inaccessible to people,” he says.

In Minneapolis, Rue worked for five years as a professional dancer with TU Dance, a touring company that combines ballet with contemporary, West African and urban styles. He traces his passion for “the physical pleasure of movement” back to a high-school production of 42nd Street that introduced him to tap and inspired him to start taking classes at a local studio. That led to competition dancing and then to studying West African dance, ballet and Horton technique in college (along with journalism and English).

In June, Rue will complete his MFA. He’s excited to do more choreographing in the year ahead and to begin curating his own events mixing together academics, fashion, art and technology. “I want to create events that are portraits of my own desire.”